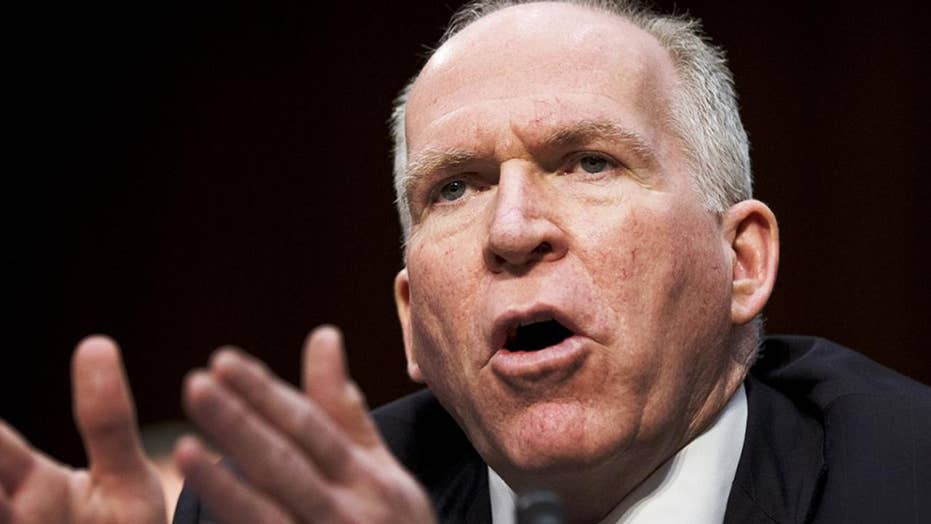 Brennan fires back at Trump over security clearance

Former CIA director blasts the 'desperate' political move by the White House; Doug McKelway reports from the White House on the reaction in Washington.

Brennan has repeatedly shown he cannot be trusted with classified or top-secret information. He has a history of leaking and exploiting confidential material for partisan reasons. Maybe it keeps him on TV, but it also jeopardizes national security.

The primary job of the agency Brennan ran for President Obama is to collect, process, and analyze intelligence information from all over the world. This valuable material is then utilized to protect Americans from harm.

However, Brennan has demonstrated that he is all too willing to use this information to harm Americans, including President Trump. He did so in the 2016 presidential election.

As I explain in Chapter 6 of my new book, “The Russia Hoax,” Brennan politicized and weaponized what was false intelligence to damage the presidential candidacy of Donald Trump.

Brennan surely knew that the anti-Trump “dossier” paid for by Democratic presidential candidate Hillary Clinton's campaign was nothing more than a preposterous collection of rumors, innuendo, supposition and wild speculation. He knew it was derived from multiple hearsay accounts from inherently unreliable and anonymous sources in Russia who specialize in lies and disinformation.

Yet Brennan did more than anyone to promulgate the fabricated and uncorroborated “dossier.”

The author of the document, former British spy Christopher Steele, was trained in deception and chicanery, and was inherently untrustworthy. Steele was on the record telling the U.S. Justice Department that he was “desperate that Donald Trump not get elected” and “passionate about his not being president.”

It is improper to use a discredited source with such severe and pervasive bias. Yet Brennan and his FBI counterparts didn’t care. Even after Steele was fired for lying, they continued to use him as a covert source in their illicit scheme to frame Trump for crimes he never committed.

Brennan was the instigator. By advocating the use of the “dossier,” he managed to orchestrate the investigation of Trump that was formally launched by FBI Director James Comey and his underlings, including Peter Strzok and Andrew McCabe. All three have since been fired for their egregious misconduct.

But it was Brennan who played a central role in promoting the fictitious Trump-Russia “collusion” narrative.

There is no good or legitimate reason for Brennan to maintain a security clearance. We expect CIA directors to be nonpartisan and apolitical. Brennan, always the devoted Clinton acolyte and sycophant, was not.

Consider this Brennan Twitter rant aimed at President Trump: “When the full extent of your venality, moral turpitude, and political corruption becomes known, you will take your rightful place as a disgraced demagogue in the dustbin of history.”

Tired clichés aside, is this the kind of person who should have access to classified information during a Trump presidency – or any presidency?

The former CIA director is clearly capable of malevolent action. He should not be armed with the nation’s secrets to inflict even more damage than he has already wrought.

Editor's note: This article is partly adapted from the author's new book "The Russia Hoax: The Illicit Scheme to Clear Hillary Clinton and Frame Donald Trump." (Broadside Books -- an imprint of HarperCollins, July 24, 2018).