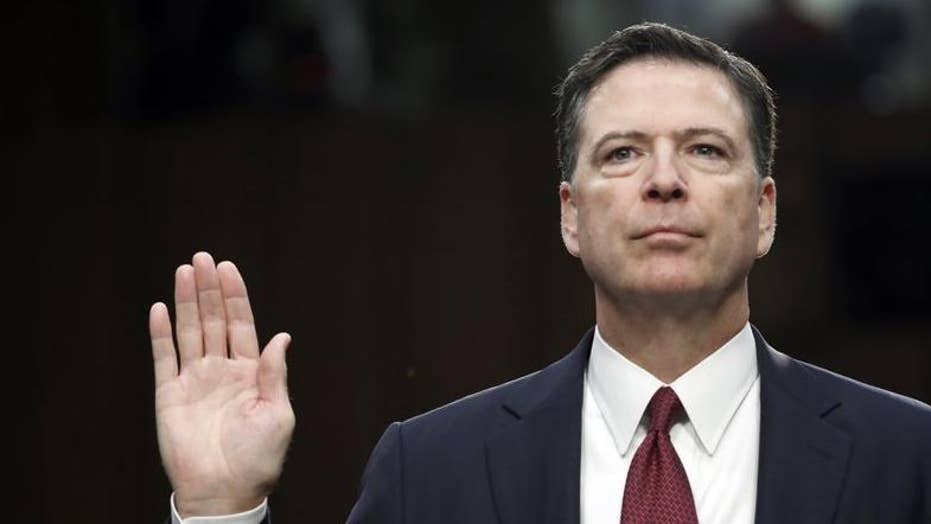 New questions over Comey's handling of the Clinton probe

Report: FBI confirms the former director drafted a letter exonerating Hillary before the investigation was complete; Ron Hosko explains on 'The Story.'

The Espionage Act makes it a crime to mishandle classified documents “through gross negligence” (18 USC 793-f). Punishment upon conviction carries a penalty of up to 10 years in prison.

With 110 emails on Clinton’s private server that were classified at the time they were sent or received, the Democratic nominee for president could have been prosecuted on 110 separate felony counts. Yet Comey scuttled the case.

But a story in The Hill this week by John Solomon says a newly discovered document shows that then-FBI Director Comey authored a draft statement accusing Clinton of mishandling classified documents and being “grossly negligent.”

The document was confirmed by Sen. Charles Grassley, R-Iowa, who is chairman of the Senate Judiciary Committee. It was written a full two months before Clinton was ever interviewed by the FBI.

However, sometime later the words “gross negligence” were edited out with red lines. The words “extremely careless” were substituted. This would appear to show that Comey knew Clinton violated the law but subsequently resolved to conjure a way to exonerate her by altering the language.

Comey didn’t do a very good job. The two terms are largely synonymous under the law.

Many standard jury instructions, such as those in California and elsewhere, say the two terms mean the same thing. That is, gross negligence is an extreme departure from ordinary care. In other words, extremely careless behavior.

Either Comey is not well-versed in the law or he sought to draw a fine distinction where none exists. Nevertheless, he employed it as an excuse to protect Clinton from prosecution in a case that should have rendered 110 criminal charges against her.

Comey must now testify under oath to explain why he would write a statement of exoneration well before all the facts were known and why he would change the language to clear Clinton in the face of incriminating evidence that she mishandled classified material through gross negligence.

Did Comey seek to absolve Clinton for political reasons? Was he pressured to do so by Attorney General Loretta Lynch or others? And why exactly did he take it upon himself to usurp the authority of the Justice Department in clearing Clinton?

If Comey prevented the prosecution of Clinton – even though there was sufficient and compelling evidence to indict her – then such interference or intervention in the due administration of the law would constitute obstruction of justice by Comey.

But that is not all. Comey blatantly misinterpreted another criminal statute, also under the Espionage Act, which Clinton appeared to have violated.

Comey was wrong. That is not the legal standard. The standard is whether Clinton committed intentional acts that violated the law. Clearly, she intended to set up a private server, and she intended to use it exclusively for all her communications as secretary of state, which would necessarily include classified documents.

By Clinton’s own admission, she deliberately created her personal and unauthorized server for the sake of convenience. She never set up a government email address for any other communications, as the FBI confirmed. These are the intentional acts that placed classified material in an unauthorized and vulnerable location.

Even if we accept Comey’s tortured interpretation that a person must intend to violate the law, the evidence is conclusive that Clinton knew she was committing crimes. How do we know?  On January, 22, 2009, she signed a document titled “Classified Information Nondisclosure Agreement,” which states in very plain language the following:

A second document signed by Clinton that same day acknowledged that she had received a comprehensive security briefing that instructed her on all the applicable laws involving sensitive information and classified materials and how they must be kept secure.

Clinton can hardly claim amnesia as a defense, since she sent an order to all State Department employees two years later, on June 28, 2011, cautioning them not to do what she was doing in violating the law. She stated in her order: “Avoid conducting official Department business from your personal email accounts.”

Yet Clinton’s mendacity is breathtaking. Congress issued a subpoena on March 4, 2015 instructing her to preserve and produce emails. Three weeks later, on March 25, some 33,000 of her emails were deleted. It is unclear how many of those communications were relevant to the subpoena, since they have vanished. Her server was wiped clean by using a file-deleting software program called “BleachBit.”

The act of defying a congressional subpoena is audacious at best – criminal at worst.

Destruction of records in any federal investigation constitutes obstruction of justice (18 USC 1519) and a violation of the Federal Records Act (18 USC 2071) and the Public Officers Law (18 USC 1924).

While the FBI did manage to recover several thousand of the deleted emails that were work-related and, thereby, required to be produced, no charges against Clinton were ever brought by Comey. In his July statement, he somehow divined that they were “not intentionally deleted in an effort to conceal them.”

Really? What other reason could possibly exist?  Clinton was just cleaning out her mailbox?

There is little doubt that Hillary Clinton flagrantly and shamelessly ignored the law. A special counsel must be appointed to reopen the Clinton email case, but also to investigate her role in what appears to be: a corrupt “pay-to-play” scheme in selling 20 percent of America’s uranium assets to Russia; payments to Russian agents by the Clinton campaign to obtain the salacious Fusion GPS dossier on Donald Trump; and the “rigging” of the Democratic nomination process in Clinton’s race against Vermont Sen. Bernie Sanders and other candidates.

The scope of the special counsel’s probe must also include the inexplicable and indefensible decisions that Comey made in exonerating Clinton in the email scandal and whether Loretta Lynch influenced the outcome.

It has been more than three months since the Republicans on the House Judiciary Committee sent a letter to Attorney General Jeff Sessions demanding that a special counsel be named. More recently, Sen. Lindsey Graham, R-S.C., reiterated the appeal.

Any delay of justice is injustice. Those who abuse and subvert the law must always be held accountable.

Neither Clinton nor Comey are above the law, although they may think so.