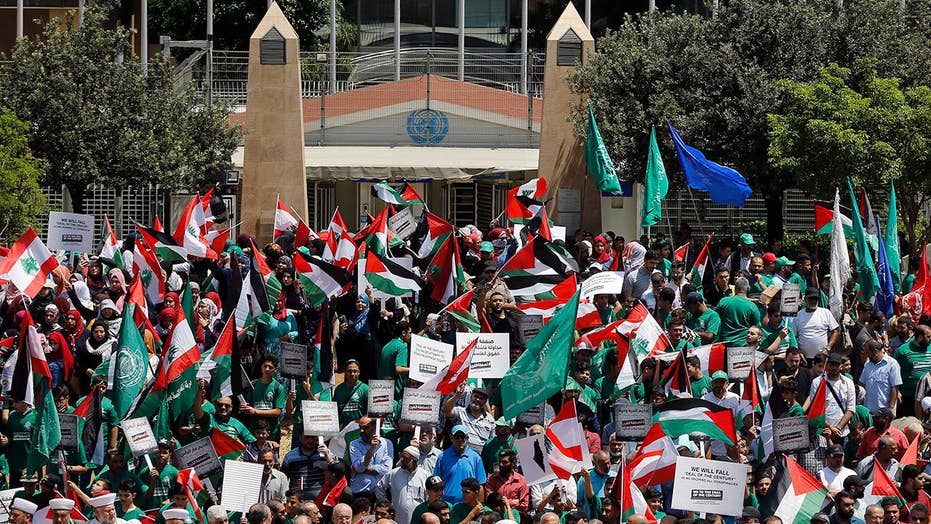 Hundreds of Palestinians protest against US-led economic conference in Bahrain

Iran’s Supreme Leader Ayatollah Ali Khameini last week touted Iran’s support for the Palestinian terrorist group Hamas. He said the way to counter the so-called "deal of the century" peace plan of the Trump administration would be to give Palestinians a "feeling of progress," offering that "not many years ago, the Palestinians were fighting with stones, but today … they are equipped with precision rockets, and this means a feeling of progress.”

This was yet another example of Iran’s warped vision for the Palestinian people – one that offers nothing but increased violence, devastation and despair.

In contrast, last month in Bahrain an entirely different and hopeful vision of peace and prosperity for the Palestinian people was presented. More than 300 government, private sector, and civil society leaders convened for the Peace to Prosperity workshop to discuss and provide feedback on the Trump administration’s economic vision for the Palestinians and the region.

The gathering generated a renewed enthusiasm for improving the lives of Palestinians and bringing peace and opportunity to the region, which Iranian aggression can clearly never achieve.

The Iranian regime has exploited the Israeli-Palestinian conflict for decades – profiting from the chaos, violence, and ineffective stopgaps to advance its malign activities and influence in the region.

It is clear that Iran is deeply invested in seeing this conflict continue. The Iranian regime provides $100 million annually in support to Palestinian terrorist groups, including Hamas, Palestine Islamic Jihad, and the Popular Front for the Liberation of Palestine-General Command. None of these funds to go humanitarian relief.

These terrorist groups have enabled numerous deadly attacks originating from Gaza, the West Bank/Judea Samaria, Syria and Lebanon – including attacks against Israelis, Egyptian security forces in the Sinai Peninsula and even American citizens.

While the Iranian regime’s support for Palestinian terrorist groups furthers its own strategic interests and directly threatens Israel and other Arab countries in the region, it comes at a deep cost to the Palestinians’ security and economic wellbeing.

The Palestinians in Gaza suffer under Iran’s terrorist partners, especially Hamas and its partner in terror, Palestine Islamic Jihad. Under Hamas’ rule, Palestinians in Gaza go without power or access to proper medical equipment and supplies, suffer some of the highest unemployment rates in the world, and are often even used as human shields.

As the Iranian regime prioritizes funding for Palestinian terror groups, it clearly falls well short of living up to its self-professed obligation of directly assisting the Palestinians.

The workshop in Bahrain was a success. The attendance and participation showed a desire to keep an open mind, explore new ideas, and build brighter and more prosperous futures for the Palestinians and the region.

The workshop also underlined the stark contrast between this vision of a hopeful and prosperous future that we seek and the one mired in conflict and violence that the Iranian regime is working harder than ever to promote.

Participants in the workshop clearly rejected Iran’s vision and embraced a future of hope and prosperity. They began a new conversation in the Arab world about a future for the Israelis and Palestinians that could be transformative – with stability, security and exciting opportunities for prosperity.

The Iranian regime’s regional aggression has brought the Arab nations and Israel together to an unprecedented degree, creating cooperation that can ultimately help advance diplomatic progress in other areas, including peace efforts between Israel and the Palestinians.

The Israeli-Palestinian conflict is no longer – if it ever was – the core conflict of the region. As Khalid al Khalifa, the Bahraini foreign minister, recently said: “If it wasn’t for Iran being present – Iranian soldiers, money, support for Hamas & jihadis that take control of Gaza – we'd have been much closer to achieving a better peace between Palestinians & Israelis.”

The Iranian regime is the core irritant that poses a direct threat to both regional and international security. The continuation of the Israeli-Palestinian conflict benefits the Iranian regime’s expansionist ambitions. Terrorism and malevolent voyeurism are Iran’s foreign policy – dangerous follies that require the region’s full attention.

Resolving the conflict will accelerate and facilitate the progress between Israel and the region that will also benefit the Palestinians. Government leaders, CEOs and economists have agreed that the Trump administration’s recently unveiled economic vision – coupled with a forthcoming political plan – would put the region on a more secure, peaceful and prosperous path.

The world should be rooting for the Trump administration’s peace vision and the future generations of Israelis and Palestinians who have suffered from this decades-old conflict. The world should be united against Iran’s illicit business and terror activities.

Put simply: A successful comprehensive peace agreement between Israel and the Palestinians is among the important tools we have to help bring regional stability and prevent Iranian terror. It would be Iran’s worst nightmare.

Brian H. Hook is the United States special representative for Iran and a senior adviser to Secretary of State Mike Pompeo.