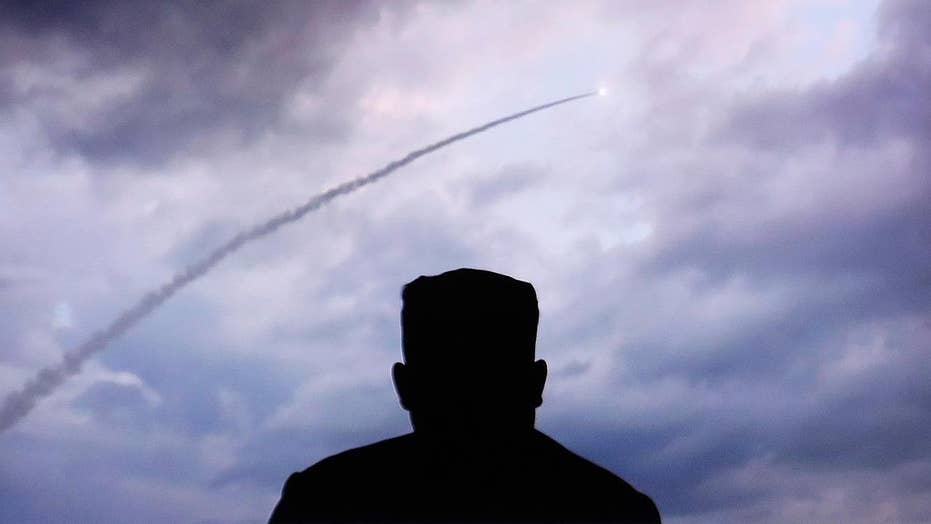 The launch comes one day before Defense Secretary Mark Esper departs for Asia on his first overseas trip as President Trump’s defense chief.

North Korea launched what appeared to be short-range ballistic missiles into the Sea of Japan twice Friday for its third round of tests in eight days. After the first launches Friday (Thursday in the U.S.), President Trump expressed no sense of alarm about the series of launches going back to May 4.

Trump called the newest launches “very standard” and said “I have no problem.”

The most recent launches took place after Trump met North Korean leader Kim Jong Un in the Demilitarized Zone dividing North and South Korea at the truce village of Panmunjom June 30. But despite handshakes and Kim inviting Trump to step a few feet into North Korea, the missile tests didn’t stop.

The U.S. president shouldn’t minimize these provocative acts. Yet there is one powerful reason he is right to show nonchalance and not react immediately.

The obvious question is: Why is Kim firing missiles at such a fast clip?

As an initial matter, the Kim family’s playbook is to appear hostile and unpredictable. Launching missiles – even short-range ones – fits the bill at this particular moment. It is what the Kim family does, as evidenced by the conduct of Kim’s grandfather and father who ruled North Korea before him.

Moreover, Kim has what he thinks are grievances. He apparently wants a repeal of international economic sanctions on his regime, and it is no secret he hopes to end all U.S.-South Korea joint military exercises.

When viewed in the context of just North Korea, it is a mistake to ignore Pyongyang’s provocative acts.

The last thing the international community should be doing is giving the North the idea that it can, with impunity, violate U.N. or other rules. If there are no costs imposed early in an escalatory cycle, Kim will think he can up the pressure. Stopping provocations later will be harder – and far more dangerous.

Second, the launches clearly show that Kim has not made a strategic decision to give up his most destructive weapons – intercontinental ballistic missiles and nuclear bombs.

The North is capable of – and may in fact be producing – six or seven nuclear warheads a year.

Trump’s current policy – lax enforcement of sanctions and laudatory words for Kim –assumes that the North Korean dictator has decided to disarm for the good of his regime.

In fact, since the historic Trump-Kim Singapore summit in June 2018, the North Koreans have increased production of fissile material, upgraded facilities to build missiles, and rehabilitated their aging plutonium-producing reactor in Yongbyon. The North is capable of – and may in fact be producing – six or seven nuclear warheads a year.

Trump’s North Korea policy, therefore, is not resulting in “denuclearization.”

Yet in a larger context, Trump is not committing a fundamental error his two immediate predecessors habitually made.

There are almost no coincidences when it comes to China and North Korea.

The U.S.-China trade talks Tuesday and Wednesday in Shanghai did not go well for the Chinese. Trump announced Thursday that he would impose additional 10 percent tariffs on $300 billion of China’s goods. So we should not be surprised if Kim’s missile launches are part of a scheme coordinated by Beijing.

During this and the preceding decade, Chinese leaders have dangled cooperation on North Korea for U.S. concessions on matters of importance to them. American secretaries of state, like John Kerry, knew how to go to the Chinese capital to plead for Beijing’s assistance after belligerent Kim acts. Presidents George W. Bush and Barack Obama fell for this stratagem time and time again.

Trump – with a blistering three-part tweet Tuesday blasting China and his tariff-imposition tweet of Thursday – told the Chinese he was not going to fall into Beijing’s trap. Therefore, by ignoring North Korean provocations he has been effectively informing his Chinese counterpart, Xi Jinping, that Xi has no leverage over Washington.

In other words, Trump – whether this has been his intention or not – has divested the malign Chinese of their Pyongyang bargaining chip.

What is the path forward for Trump? He should now do to Kim what he has just done to Xi.

Trump, at the G-7 summit in Canada last year, said he was giving Kim a “one-time shot” to disarm. That means his patience is not, as it now appears, inexhaustible.

Kim should think about the way Trump treated Xi. For more than a year, the U.S. president was handing out free passes to the Chinese leader, using effusive language about him. Then in 2018 Trump brought down the hammer, imposing punitive tariffs on China and implementing other Beijing-unfriendly policies.

Trump, in short, gave Xi a grace period in which to reciprocate generous American overtures. Xi, however, pushed Trump too far.

So Kim might want to ponder this Trump-Xi history before he tests the limits of Trump’s patience and launches another projectile into the Sea of Japan.