Mikhail Gorbachev’s recent passing brought back many memories of the man, the Cold War and America’s eventual triumph over the Soviet Union in 1991.

Praised by many in the West and reviled by many more back home, Gorbachev led the USSR through unprecedented turmoil, eventually opening Russian society and embracing freedoms that Americans take for granted today. But I can’t think of Gorbachev without remembering a U.S. president whom I was honored to serve: Ronald Reagan.

In many ways, it’s impossible to mention Gorbachev without Reagan, who was friend in some cases and foe in others.

Both men were change agents, with Reagan ushering in a new wave of American conservatism and Gorbachev introducing Russians to "glasnost" (openness) and "perestroika" (restructuring). Both men wanted peace and were dismayed by the looming threat of nuclearization and determined to avoid a war that could not be won.

But the similarities stop there. In 2022, the legacies of Reagan and Gorbachev couldn’t be more different. Gorbachev’s death inevitably reminds me of Reagan’s unprecedented popularity – which endures today. 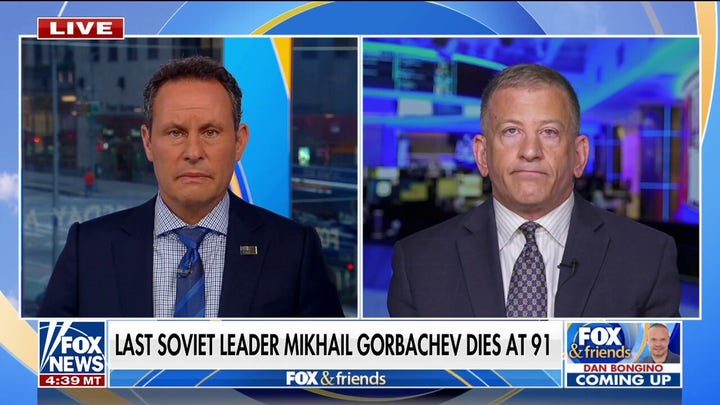 On the campaign trail and throughout his presidency, Reagan understood that enhancing America’s military strength was integral to restoring America’s standing in the world. From high-tech weapons systems to expanded military training, he supported the largest peacetime defense buildup in U.S. history.

By making America strong again, Reagan’s message to Gorbachev was clear: We will win the Cold War. His famous words – "Mr. Gorbachev, tear down this wall" – only reinforced a message of strength that was backed by action.

RUSSIA IS GREATEST THREAT TO US, BUT BIDEN ADMINISTRATION ADOPTED CHINA-FIRST DEFENSE POLICY

With strength came support. Reagan was more popular than his three immediate predecessors – Jimmy Carter, Gerald Ford and Richard Nixon – and his popularity only grew by the late 1980s, as Gorbachev struggled to reform the USSR from within. When Reagan left office, nearly two-thirds of Americans approved of his job performance – cemented further by the Soviet Union’s impending collapse. By 2002, Reagan’s approval rating had ballooned to 73%.

Reagan’s oratory prowess allowed him to explain his plans clearly and effectively, and more Americans came to admire the Great Communicator over time. As it became clear that Reagan’s plans worked, their admiration only grew. America’s admiration is still growing.

People stand by the coffin of former Soviet President Mikhail Gorbachev inside the Pillar Hall of the House of the Unions during a farewell ceremony in Moscow, Russia, Saturday, Sept. 3, 2022. (AP Photo/Alexander Zemlianichenko)

Unfortunately, Gorbachev could not say the same. His efforts to alter the Soviet Union ultimately won him the Nobel Peace Prize, but he lost the respect of his people in the process. As Russian analysts rightly claim, Gorbachev was "loathed" at home before his death. Last year, more than 70% of Russians said their country had moved in a negative direction under Gorbachev. Vladimir Putin’s refusal to attend Gorbachev’s funeral is telling.

In truth, Putin’s Russia is a remnant of Gorbachev’s failure to pick a worthy successor. By choosing the ineffectual Boris Yeltsin and leaving a fledgling democracy to falter under his watch, Gorbachev laid the foundation for future tension between America and Russia. Today’s resurgent Russia can be tracked back to the mid-1990s, when Gorbachev only managed 1% of the vote in his post-USSR presidential election.

Gorbachev is the President Biden to Reagan’s, well, Reagan. Drawing parallels to today, the Gipper’s legacy is all the more remarkable given the current lack of leadership in the White House.

Like Carter before him, President Biden is leading America from behind, with a 38% approval rating and no semblance of a national mandate.

An alternative is clearly needed, and worthy up-and-comers like Gov. Ron DeSantis exhibit many of the same leadership qualities that made Reagan so successful. Americans are ready for a leader like DeSantis to reclaim Reagan’s vision for America, follow in Donald Trump’s footsteps, and lead from the front.

But, until then, Americans can only hope and pray for another Ronald Reagan, who will go down as one of our strongest leaders. Mikhail Gorbachev – rest in peace – will surely be viewed as Russia’s weakest and worst. May we only hope for one and not the other in 2024.

Ed Rollins is chief political strategist for Ready for Ron PAC. He managed President Reagan’s 1984 re-election campaign, serving as assistant to the president during President Reagan’s first and second terms. Throughout his career, Rollins has served in the administrations of, and advised, three other U.S. presidents.