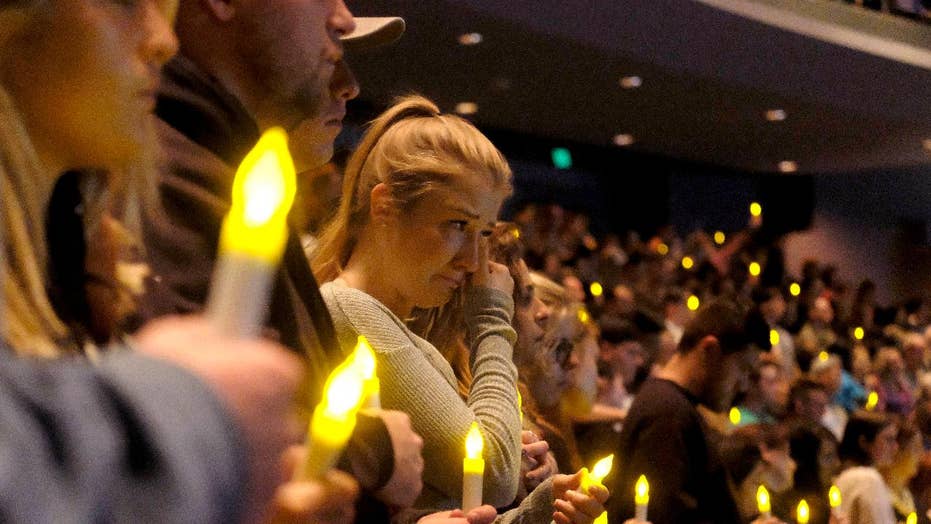 Carley Shimkus has the details as tributes to the 12 lives lost in the California shooting pour in on social media.

The murders of 11 Jews praying in a Pittsburgh synagogue Oct. 27 and of 12 people at a bar in Thousand Oaks, California Nov. 3 are still fresh in our minds. So is the mailing of 16 pipe bombs to critics of President Trump and news organizations in late October and early this month. Thankfully, none of those bombs exploded or caused any harm.

There is no magic solution that will stop every such attack or guarantee that we find every attacker who manages to flee the scene of the crime, especially when the perpetrator is a single deranged or hate-filled individual. But just because we can’t stop every such domestic attack doesn’t mean we can’t stop a lot of them.

I’m struck by some of the lessons we might learn from America’s intelligence agencies, including my former employer, the CIA.

Our intelligence agencies collect information around the globe about terrorists and others who threaten us. These agencies are not perfect and don’t always succeed, but they have a strong record of success (much of it not made public) using what’s known at HUMINT, or human intelligence.

The CIA website has a detailed explanation of what HUMINT is. But the short definition is any information collected by humans – either secretly by spying, or from talking to people and foreign governments.

Some large police departments here at home – most notably in New York City – have large intelligence operations to find terrorists and other criminals. Other law enforcement agencies need to step up their intelligence efforts to the extent possible to do a better job finding dangerous criminals as well.

How does HUMINT work?

Years ago when I was serving with the CIA in South Asia, we were tracking a senior terrorist operative who was planning attacks inside the United States. Using the full panoply of HUMINT and intelligence from other sources, we found the target and fixed his location.

This counterterrorism operation – part of our strategy to ensure terrorism would not be visited on our shores – was a significant but not well-publicized success.

Later – while back in the U.S. visiting family, friends and colleagues – I found there were very few people who were aware of the terrorist’s death, even though there had been some media coverage.

When I returned overseas I held an all-hands meeting with our entire team. I explained how our ability to conduct this operation in relative obscurity was a great achievement.

Our fellow citizens were not putting their lives on hold, losing sleep, or stressing about this terrorist being on the loose. Intelligence Committee members in Congress and senior government officials were in the know, but our citizens simply trusted us to do our jobs.

CIA Director Gina Haspel said at her Senate confirmation hearing in May that it was an honor to lead the “men and women who are our country’s silent warriors. These dedicated professionals spend much of their careers in difficult, far-flung outposts of the globe, striving to make our fellow Americans more secure at home.”

This is the CIA’s ethos.

The CIA’s competitive advantage is HUMINT, which requires recruiting spies among our most dangerous state and terrorist enemies. This is something more domestic law enforcement agencies need to replicate, within the legal constraints on their activities and the protections our citizens enjoy under our Constitution and laws.

HUMINT forms the cornerstone of CIA all-source analysis on which policymakers rely.

An intelligence success depends on quality HUMINT, expert analysis and effective decision-making before the threat materializes.

This notion of an intelligence success presupposes predictive intelligence exists. The less intelligence available for collection on threats, the closer the threat moves to striking before we can take measures to stop it.

Authorities arrested the suspected pipe bomber based on lightning-fast intelligence collection and analysis, before a successful attack took place. The accused gunmen at the Pittsburgh synagogue was stopped when he was shot and wounded by police, and the killer at the California bar fatally shot himself.

In many ways, stopping domestic lone wolf attackers is harder for domestic law enforcement agencies than the challenge intelligence agencies and the military face in combatting terrorists overseas.

Terrorists usually operate in groups, meaning they have to communicate with each other – and those communications can at times be intercepted. They need to raise money for big operations. They need to travel, often across borders.

The single attacker armed with a gun or a homemade bomb is harder to find if he doesn’t share his plans with others. Yet many times today, these attackers leave a trail of information on social media or confide in friends or relatives, providing clues that can be used to identify them before it is too late.

An effective crisis response plan with regular drills can reduce casualties in the event of an attack. In this context, there has been much debate about the efficacy of placing armed guards in places of worship and other vulnerable locations.  But this is the very last layer of defense, when the threat has materialized and the enemy is literally at or inside the gates.

More can be done farther out from the potential attack.

Dialing down the heated, inflamed rhetoric in the media and among our politicians is a good first step. But even a sea change that transforms our political discourse to new levels of civility would not eliminate the motivation of mentally disturbed extremists to commit violence.

What should we watch for?

First, those who seek to do us harm often conduct surveillance before an attack. A person who asks questions beyond basic curiosity about a building’s purpose, operations, security procedures and personnel should raise a red flag of caution.

People who remain in an area with no purpose and pay unusual attention to buildings beyond a casual interest might likewise be worthy of concern.

There should be more debate about whether to restrict civilian access to semi-automatic rifles, the weapon of choice for so many recent mass shootings

But from an intelligence perspective, consider the potential value of coupling motive and means by having tracked the accused  Pittsburgh synagogue gunman’s weapons purchases with his posts of anti-Semitic threats on social media sites – including just hours before the attack.

The First Amendment protects the expression of hate, but all of us in the crosshairs of this speech would do well to collect information on the extremist authors and bring it to the attention of local authorities.

Disparate information from multiple sources comes to us like jigsaw puzzle pieces, which when assembled reveal threats.

We can be blissfully unaware of the extensive military and intelligence overseas operations against those who threaten us. But at home, we should apply the New York City Metropolitan Transportation Authority “if you see something, say something” standard.

Our public can enhance their communities’ safety by maintaining a heightened state of awareness and remembering if they see something suspicious – whether in cyberspace or geographic space – to report it to the police.