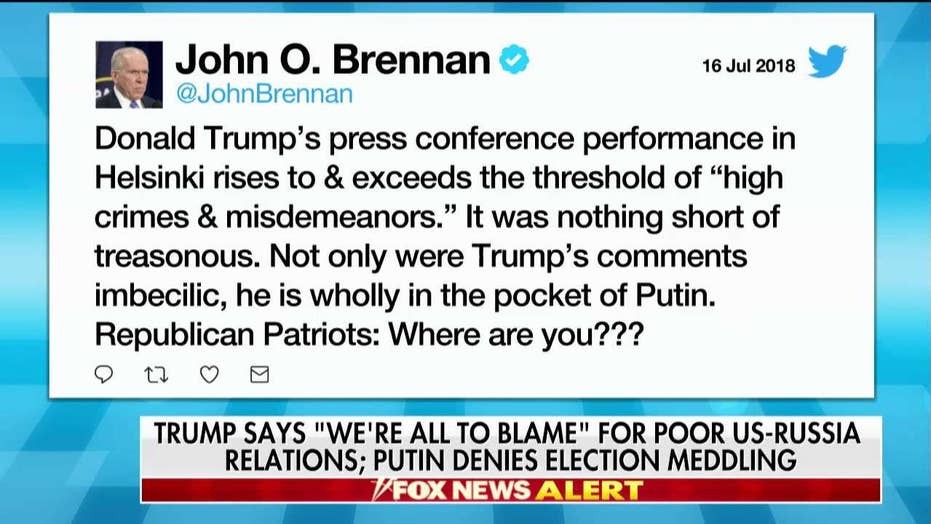 John Brennan, appointed as CIA director by President Obama, is suffering from a severe case of Trump Derangement Syndrome. He has become so blinded by his intense and unbridled hatred for the duly elected president of the United States that he’s now embracing crazy conspiracy theories.

Following President Trump’s summit with Russian President Vladimir Putin in Finland to discuss key foreign policy issues on Monday, Brennan tweeted: “Donald Trump’s press conference performance in Helsinki rises to & exceeds the threshold of ‘high crimes & misdemeanors.’ It was nothing short of treasonous. Not only were Trump’s comments imbecilic, he is wholly in the pocket of Putin. Republican Patriots: Where are you???”

So now it is an impeachable offense for presidents of the United States to meet with a Russian leader if they don’t scream in his face, call him a liar, and maybe punch him in the nose?

Does Brennan believe Democratic President Franklin Delano Roosevelt should have been impeached for creating a World War II alliance with Soviet dictator Josef Stalin to fight the Nazis? What about subsequent U.S. presidents of both parties who met with their Soviet and later their Russian counterparts? Are all these presidents traitors? Of course not.

Brennan’s hysterical reaction to the Trump-Putin summit seems to indicate he hates President Trump more than he loves America.

The former CIA director’s tweet this week, along with comments he has made in media interviews, wasn’t the first time he showed Trump Derangement Syndrome has taken over his mind.

Earlier this year, Brennan tweeted venomous language usually reserved for some unhinged party committee intern or a marginalized political operative that no one wants to associate with.

Here’s what Brennan had to say on Twitter about President Trump on March 17: “When the full extent of your venality, moral turpitude, and political corruption becomes known, you will take your rightful place as a disgraced demagogue in the dustbin of history. You may scapegoat Andy McCabe, but you will not destroy America...America will triumph over you.” McCabe is the disgraced deputy director of the FBI, who was fired for misconduct.

Why would John Brennan make the consequential decision to forfeit his credibility with his extreme anti-Trump statements? He has gone way beyond the language of reasonable discourse or legitimate political disagreement. This is Trump Derangement Syndrome at a fever pitch.

If Brennan wants to find a high-ranking U.S. government official who has been overly sympathetic to Russia all he has to do is look in the mirror.

Brennan says he reluctantly admitted – when he was being questioned while hooked up to a lie detector for his first CIA job – that he voted for the Communist candidate for president of the United States when he was a college student in 1976.

Brennan claims his support of the Communist candidate was “signaling my unhappiness with the system, and the need for change.” And he admits he feared that if he lied about his vote while he was hooked up to the CIA lie detector “the machine is probably going to go, you know, wacko.”

The Communist Party, as every middle school student ought to know, is opposed to everything our constitutional republic stands for. At a time when America was knee deep in the Cold War, voting for liberal Jimmy Carter wasn’t enough for John Brennan. Brennan really wanted to object to America by supporting the Communist Party – the U.S. branch of the political party that ruled the Union of Soviet Socialist Republics.

Shamefully, Brennan voted for the ideals of Karl Marx over the ideals of James Madison. He chose to ignore the actions of the mass-murdering totalitarian government that the United States was confronting around the globe and support a Communist for president.

This disturbing peek into Brennan’s mind makes it entirely plausible that one of the reasons he hates President Trump so much is because he dislikes our capitalist system that produces wealthy and successful entrepreneurs like Donald Trump.

There is a prevailing wisdom in Washington that our nation’s top national security positions should not be handed to political hacks with a penchant for partisan mudslinging. This is one of the things that the D.C. swamp gets right; the heads of the State Department, Defense Department, Justice Department, FBI, and CIA must rise above the day-to-day political fights and be wise enough not to engage.

It’s important to our system of government that our national security leaders stay out of the gutter. Unfortunately, former CIA Director Brennan has made the foolish decision to jump into the gutter head first.

Did President Obama know Brennan was a political hack before he nominated him to be our CIA director for four years? Did he care that Brennan voted for a Communist for president of the United States? How did Brennan even get hired for a job at the CIA after making his admission about voting for a Communist?

Maybe President Obama was just happy to have Brennan’s help to spread the wealth around and fundamentally transform America. In retrospect, the decision to nominate Brennan as CIA director calls Obama’s judgment into question.

The failure of the Obama administration to confront Russian meddling before the 2016 election deserves much more scrutiny. The role of Obama officials at the State Department, Justice Department and other agencies played in facilitating political opposition research efforts against President Trump and his campaign also needs far more examination.

Now that John Brennan has exposed his hyper-partisanship through his own inflammatory rhetoric, would it surprise anyone if he were part of the crew trying to stop Donald Trump from becoming president, along with disgraced FBI official Peter Strzok?

President Obama, Brennan and many others should answer these questions – if the liberal media ever build up the courage and honesty to ask. Congress must also act. Obama’s senior advisers need to testify about their inaction on Russian election meddling and their anti-Trump political activity without delay.

As for Brennan, he needs to seek immediate treatment for his severe case of Trump Derangement Syndrome, a newly discovered condition that is still being studied by the experts. It’s unclear if the ailment forces sufferers to lose their minds politically or just exposes their true political beliefs. Either way, John Brennan needs professional help.