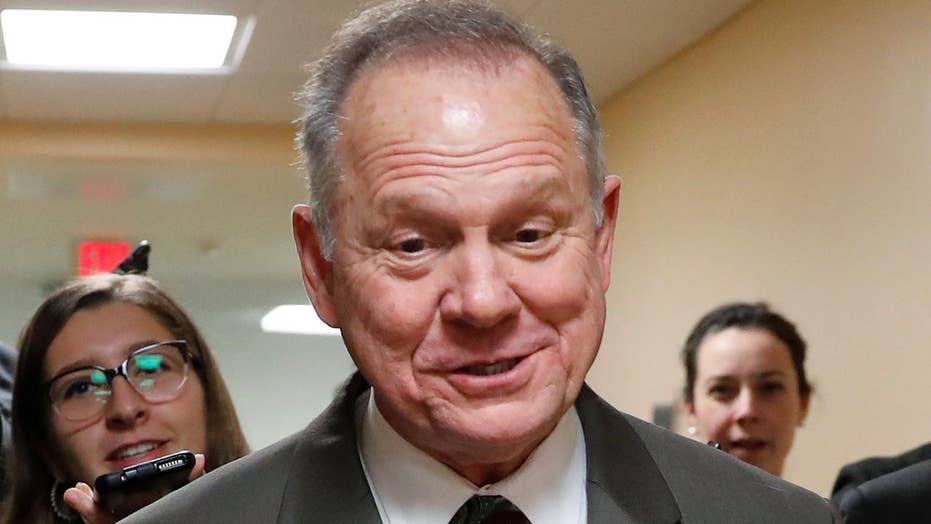 Judge Roy Moore shows no signs of backing down

Up front, here is what I think Roy Moore should do. If he continues to deny the allegations, he should hold a press conference and tell people he wants to clear his name. In the interests of helping the President and avoiding a Democrat, he will continue to campaign for the office and then, if elected, resign so that the Governor can appoint his replacement so that he might focus on clearing his name. He can call this move the Corzine gambit.

Now here’s a post to make everyone mad. I really don’t blame Roy Moore’s voters for sticking with him and I know they are going to come under withering attacks for standing by their man. They don’t deserve it. Clearly a lot of people would prefer to avoid dealing with how we got to this point of moral decay among conservatives who used to really believe character counted.

Well, just this past Sunday a militant atheist shot up a church in Texas, killing about half the congregation. One of those killed was still in the womb, but the baby gets counted as a person to boost the arguments for gun control, otherwise the baby would just be a fetus.

And many on the left on social media attacked the congregants of the church. Some said they got what they deserved. Meanwhile, the media ran with stories of chainsaws attached to machine guns distorting all the basic facts out of willful ignorance.

A week before, a Muslim ran over a bunch of people in New York while Democrats were patting themselves on the back for showing Trump voters running over muslim kids on television.

A few weeks before that, a CBS lawyer lost her job for mocking the dead in Las Vegas that they deserved what they got after a mass shooting, the motive behind which is still unknown.

While all of this is going on, a cake baker is headed to the Supreme Court because he had the audacity to bake a cake for a gay wedding, but he would not do all the decorations the gay couple wanted. So the baker got compared to a Nazi. He will join a florist at the Court who is being put out of business because despite having gay clients, she won’t provide flowers for gay weddings.

People are being harassed for refusing to cheer on men with mental illness who think they are women and the left thinks people in Alabama should have to let men use the ladies’ bathroom. The left is openly counting the days before churches can have their tax exempt status revoked for not embracing gay marriage. Christian private schools will be the first targets. The media on a near weekly basis runs stories that paint culturally conservative voters in a negative light, often distorting basic facts for the sake of narrative.

So you’ll have to excuse Trump voters and Moore voters for thinking the left in this country with a complicit media is out to get them.

Along comes a story about Roy Moore, a happily married man, that involves facts from 30 to 40 years ago and many of the same people who’ve spent a long time covering for people like Harvey Weinstein and are still covering for Hollywood pedophiles are piling on the man. The GOP, who hates cultural conservatives anyway, was quick to pile on.

Moore is a fighter for these people. He purports to share their values. And all the people his voters hate happen to hate Roy Moore. They talk about innocence until proven guilty, but they’re ready to run Moore out of town. I don’t blame Moore’s voters, but I do have to blame those who are trying to defend Moore and dismiss the accusations or attack the women coming forward. Conservatism keeps being degraded by a bunch of people who talk Jesus and behave like Satan.

Y’all, I think the facts of the case as presented by the Washington Post are pretty damning. If I were a voter in Alabama, I would probably have to sit it out. But there are a lot of voters who are really damn tired of the culture war and they just want to be left alone. But the left won’t leave them alone. They’re coming for their churches’ tax exempt status. They are coming to force them to either get on board the secular progressive agenda or go into hiding. They are coming for their kids and their guns as well.

So now you are telling them they are really awful, bad people if they stick with Roy Moore instead of allowing into office a man who will side with the people who are out to get them?

So we have the luxury of turning our nose up at it. And we can say character counts. But they believe character and morals count too and while they might find Moore’s actions reprehensible, they know the other side won’t be happy until their kids are brainwashed into thinking boys can be girls, a baby’s brains can be harvested with taxpayer subsides, and guns should be made extinct.

You really want to make them choose? You helped cause an existential crisis where they have every good reason to believe their way of life and their values are at stake and you want them to surrender? I can’t blame them for refusing even if I disagree. If you’re demanding the other side surrender in the culture war, don’t be surprised when they’re willing to stand with people they’d never otherwise consider in the name of protecting themselves and their families.