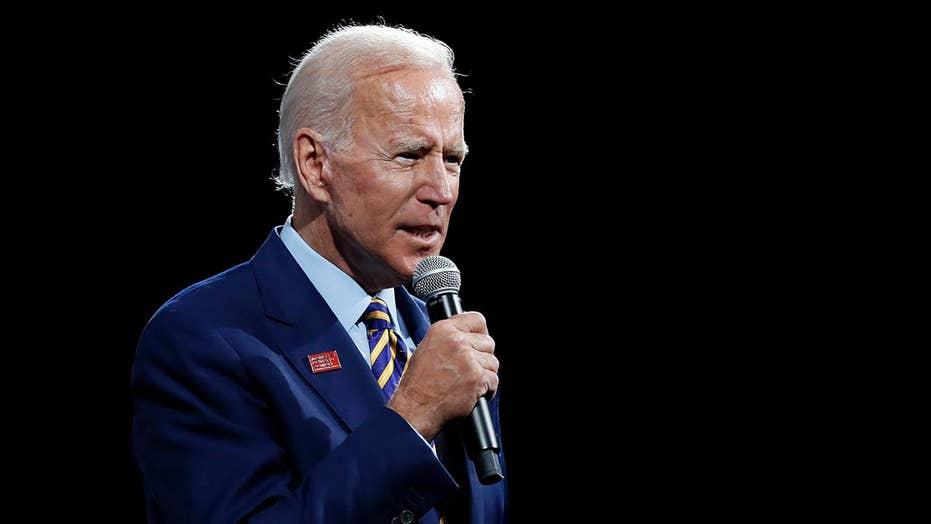 A look at Joe Biden's long history of embellishment

Joe Biden's claim that he was a civil rights leader could be the biggest problem for the Democratic presidential candidate, says Alana Goodman, investigative political reporter at the Washington Examiner.

Recent polling both nationally and in early voting states shows the Democratic presidential primary race shifting and on the verge of changing.

Former Vice President Joe Biden’s poll numbers have leveled off in the weeks following his above-average second debate performance, signaling a general trend of weakness and lack of excitement surrounding his campaign.

According to a Fox News Poll released last week, Biden still leads with 31 percent of the vote, followed by Sen. Elizabeth Warren of Massachusetts in second place at 20 percent. Though Biden’s lead is still a considerable 11 points, it has narrowed since June, when another Fox News poll had Biden’s lead at 19 points.

To be sure, these numbers show Biden stuck in essentially the same position as he was in two months ago. However, Warren experienced a surge in recent weeks, largely at the expense of her top progressive contenders, Sens. Bernie Sanders of Vermont and Kamala Harris of California.

The same Fox News poll released last week shows Sanders and Harris lagging behind Warren by 10 and 12 points respectively, in a noteworthy reversal from when both led the senator from Massachusetts less than one month ago.

Further, recent polling in early voting states indicates that Biden may very well lose not just in Iowa, but also in the following early nominating contests in states such as New Hampshire and Nevada, where Warren has also picked up support.

In a recent Monmouth University poll conducted among likely Iowa caucus-goers, Biden still leads the field with 28 percent support, though this is nearly identical to his 27 percent support in April. However, Warren is now in second place at 19 percent, up from 7 percent in April.

Moreover, historically speaking, candidates on the left tend to overperform their polling numbers in early states. We can almost certainly say this will be the case with Warren, given that the energy and enthusiasm is with the left-wing of the party.

Biden should certainly direct his focus towards early voting states such as South Carolina, as a landslide victory there would validate his strength as a candidate, in comparison to either mild victories or even losses in prior states. Given the large African-American presence in South Carolina, Biden will necessarily have to win there if he is to remain the clear frontrunner.

Although Warren’s campaign has generated a great deal of enthusiasm in the party, there are legitimate concerns about how her progressivism would fare against Trump in a general election – particularly in swing states such as Michigan and Pennsylvania, which were won by Obama in 2012 and then by Trump in 2016.

The question of Warren’s “electability” is a foremost concern for many Democratic voters, even her supporters. A recent Quinnipiac University survey revealed that she falls far behind Biden on the question of “who has the best chance to beat Trump?” While 49 percent of respondents named Biden as the best candidate to beat Trump, only 9 percent said that Warren is.

While it is clear that electability is important to Democratic voters, none of that evidence suggests to me that there will be a widespread movement opposing Warren for the nomination.

As the primary season begins to pick up, Biden should understand that his campaign has plateaued, or likely trended down. Though he remains the front-runner, his path to the nomination is uncertain.