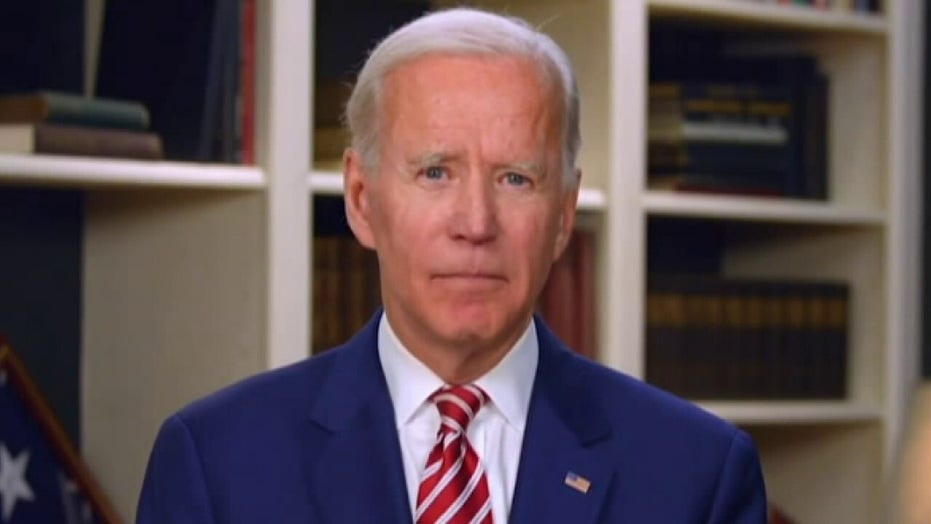 Vice President Biden calls out those 'tasked with enforcing the rule of law' for 'abusing their powers' during virtual commencement address.

President Trump recently concocted a new phrase to continue his absurd attacks and insults against President Barack Obama. I’m not even going to dignify the phrase by including it in this column.

Suffice to say, without providing any facts (his usual method of operation), Trump accused his predecessor in the White House of “the greatest political scandal in the history of the United States.”

Why did Trump hurl this completely unfounded accusation? Why, in the middle of a pandemic confirmed to have taken almost 100,000 American lives – including an alarmingly disproportionate number of African-Americans and Hispanics – did Trump attack the only African-American president in our history?

MSNBC’S MIKA BRZEZINSKI WANTS TRUMP BLOCKED BY TWITTER: ‘A CALL IS BEING SET UP’

And why – at the same time as he’s trying to lure African-American voters to support him in the November election – did Trump go after our standard-bearer?

To put it precisely, because Trump knows that if he can boost his share of the African-American vote up to 10 percent – from the approximately 6 percent of our vote he got in 2016 – he will be reelected.

Or alternatively, if Trump can motivate just 8 percent of African-Americans not to vote for Vice President Biden – or to vote for a third-party candidate –Trump can will as well.

However, this political strategy will fail. Because no matter how hard Trump tries to smear the legacy of his predecessor, we will not easily forget the tremendous accomplishments of the Obama-Biden administration.

And we will not forget the terrible failures of the Trump administration, including its inept response to the coronavirus pandemic.

Quite the opposite. We will make Trump pay a price at the polls for going after President Obama. We will ensure that Trump’s attack, intended to both attract and suppress the African-American vote, will backfire in November.

But before we debate presidential legacies, I’d like to focus on another dangerous phrase repeated by the president this week. On Monday, Trump said he’s taking hydroxychloroquine to combat the coronavirus. This despite the fact that the Food and Drug Administration warned against the widespread use of the drug. In defending himself, Trump stated: “What do you have to lose?”

Which got me to thinking: remember when Trump said those words before? I do!

Remember when, in August 2016, Trump was running for president and he asked African-Americans: “What the hell do you have to lose” in voting for him? I do!

Remember when, in January 2018, in speaking about immigration at a bipartisan meeting with members of Congress, Trump reportedly asked, in reference to African and other countries, “Why are we having all these people from s---hole countries come here?” I do!

Remember when, in July 2019, Trump tweeted that Democratic Reps. Alexandria Ocasio-Cortez of New York, Ayanna Pressley of Massachusetts, Ilhan Omar of Minnesota and Rashida Tlaib of Michigan are “from countries whose governments are a complete and total catastrophe” and that they should “go back” to those countries? I do! And by the way, three of these congresswomen were born in the United States of America!

Remember when, that same month, Trump attacked Rep. Elijah Cummings, D-Md., as a "brutal bully" and called Cummings' majority-black district a "dangerous and filthy place?" I do!  Congressman Cummings, may he rest in peace, was a legendary leader and a dear friend, who died exactly three months after being attacked by Trump.

Why did all of these painful Trump memories come flooding back to me this week? Why did Trump’s attack on the Obama-Biden legacy, combined with his repetition of the phrase, “What do you have to lose,” get me so fired up?

Because the American people – especially African-Americans – have already lost so much during the Trump administration. And we stand to lose so much more if he is reelected to a second term in November.

So, back to Trump’s shameless and unfounded smear of President Obama. Let’s focus on the facts and what exactly we have to lose.

As my Fox News colleague, Juan Williams, wrote in his aptly-titled book, “What the Hell Do You Have to Lose,” African-Americans stand to lose a rising middle class, an equal opportunity to compete in the workforce, and a society that values fairness and supports equality.

Specifically, during the Obama-Biden administration, African-American unemployment and poverty rates dropped by historic levels. Incarceration rates for African-Americans also fell during each year under President Obama to their lowest point in over two decades.

At the same time, life expectancy and high school graduation rates among African-Americans reached their highest levels ever. And during the Obama-Biden administration, over 1 million more African-American and Hispanic students enrolled in college.

President Obama and Vice President Biden made 62 lifetime appointments of African- Americans to the federal bench. These appointments included 26 African-American women – more than appointed during any presidential administration in American history.

Now that’s a legacy of our 44th president for the ages. And it’s just a drop in the bucket of a listing of the accomplishments of the Obama-Biden administration.

So what is Donald Trump’s legacy? He and his Republican Party have opposed and tried to overturn almost every accomplishment of his predecessor. On employment, education, criminal justice and health care, African-American’s rights and progress have been eroded since Trump took office.

The independence of our judiciary and African-Americans’ hard-fought right to vote are under constant attack. According to the Leadership Conference on Civil Rights, Senate Majority Leader Mitch McConnell, R-Ky., has enabled the Trump administration to pack the federal bench with 150 judges who are “some of the most extreme nominees” in American history.

And Trump’s Justice Department has abused the Civil Rights Act to countenance the closure of polling places in urban areas used predominantly by communities of color. The Trump administration and Republican governors have also made it more difficult for African- Americans and other communities of color to register to vote. They have passed laws to end or limit early voting, to require documentation to vote, and to purge voter rolls.

That will be the disgraceful legacy of our 45th president.

So when Donald Trump falsely accuses Barack Obama of crimes and he asks us what we have to lose, the stark difference between these presidents and their legacies couldn’t be clearer.

Former President Obama’s one-word response to Trump’s baseless attacks couldn’t be clearer: “Vote.” Because if we don’t, we have everything to lose.