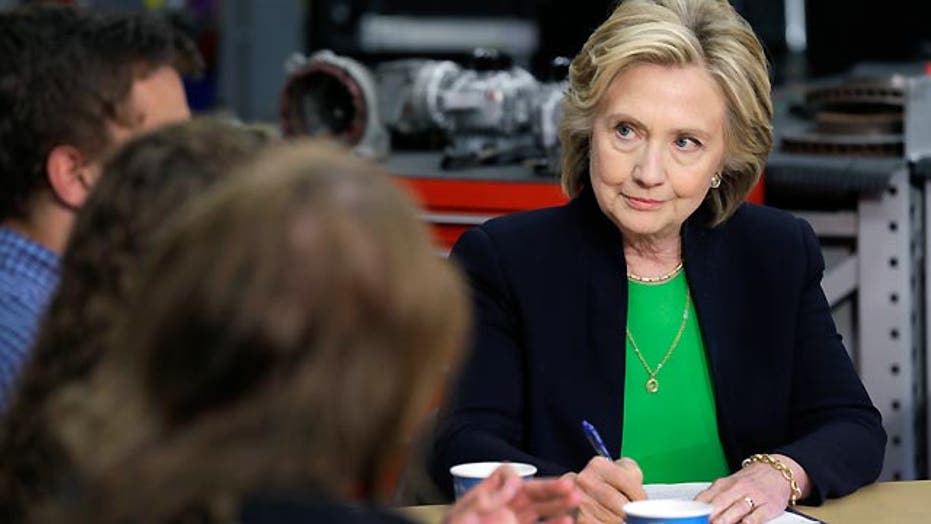 In the video announcing her presidential candidacy, Hillary Clinton says the economic deck “is still stacked in favor of those at the top.”

She should know because she has gobbled up a lot of cash for speaking fees and the Clinton Foundation.

After 67 years on this earth, the last 23 of which have been in the political spotlight, Hillary Clinton thinks the public may not know who she is.

The video also includes the word “reinventing,” a kind of self-reset button (it didn’t work with the Russians, but she apparently thinks it will work for her). After 67 years on this earth, the last 23 of which have been in the political spotlight, Hillary thinks the public may not know who she is.

After 67 years on this earth, the last 23 of which have been in the political spotlight, Hillary Clinton thinks the public may not know who she is.

In fact, we do and this video is an attempt to apply tinted glass to her campaign wagon in hopes of obscuring the real Hillary.

People with long memories and a firm grasp of political history, will recall this is straight from the Richard Nixon playbook. “The New Nixon” public relations campaign was an attempt by Nixon supporters to reinvent (that word again) a man whom many saw as cold, remote, dishonest and unknowable. You know, like Hillary Clinton.

In his book, “Behind the Front Page,” the late Washington Post political reporter David Broder wrote, “There is an even bigger question that ought to bother most of the reporters and editors involved in covering politics in the 1950s and 1960s: How in the world did we succumb to, and spread, the fiction of ‘the new Nixon’?”

Will today’s journalists do the same for Hillary?

Writing in the book “The Republican Establishment,” Broder and Stephen Hess observed: “Those who have puzzled over the essential Nixon character have usually ended by writing about the changes in the man, not the constants. Nixon-watchers tend to see him always evolving from one stage to another. In the course of a long career he has been called the New Nixon, the Old Nixon, and the New, New Nixon...”

Wallace Henley, a Nixon staff assistant, responded to my email inquiring about Nixon’s several reinventions: “This reinvention came from Nixon’s intense pragmatism. I think of the man who won through the ‘Southern strategy’ (partly at least) becoming the champion of school desegregation, the fierce anti-communist becoming the man who went to Communist China, and the presumably free-market advocate declaring wage and price controls on August 15, 1971, a de facto taking over of the national economy by the federal government. Some of this, to be generous, was principled, but all revealed the element in his character that could reinvent itself as needed. Flexibility is good and essential in policy-making, but it also leads to an easily elastic character that can stretch itself to the Watergate cover-up, etc., etc. ... or, in another case, Whitewater acrobatics, Benghazi subterfuge, etc.”

According to one report, Hillary’s ethical problems extend back to her days working on the Senate committee investigating the Watergate scandal. In his 2006 book, “Hillary’s Pursuit of Power,” Jerry Zeifman, a lifelong Democrat and a counsel and chief of staff of the House Judiciary Committee, who supervised Clinton on the Watergate investigation, wrote that the then-27-year-old Hillary Rodham “engaged in a variety of self-serving unethical practices in violation of House rules.”

In his book, Zeifman makes it clear he doesn’t trust either of the Clintons and charges she is ethically unfit to be president.

Does the country want to put up with another four or eight years of playing it close to the ethical edge with the “buy one, get two” Clintons?

In response to Hillary Clinton’s announcement, a Republican National Committee statement said: “Americans need a president they can trust and voters do not trust Hillary Clinton.” New Quinnipiac University polls released recently bear this out.

How ironic that Hillary Clinton is employing Nixon’s “reinvention” tactic. Nixon got away with it for a while, but in the Internet age, a “new” Hillary will quickly be exposed as no different from the “old” Hillary.