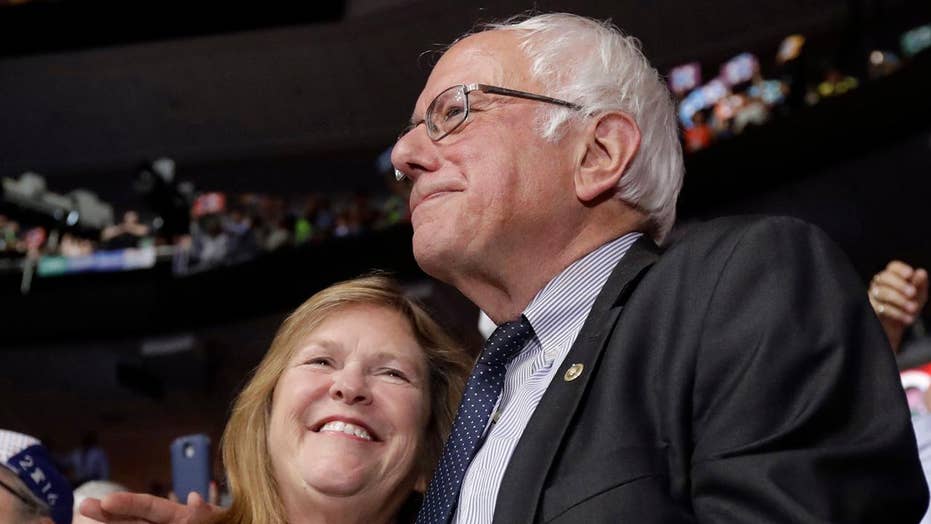 Bernie Sanders and his wife lawyer up amid an FBI probe

Jane Sanders is being investigated for allegations of bank fraud during her tenure at Burlington College; James Rosen has the details for 'Special Report'

So now the shoe is on the other foot. A Trump surrogate has gotten the FBI to open an investigation of Jane and Bernie Sanders for alleged bank fraud. The couple has lawyered up, as is their right. The allegations seem more civil than criminal but the Trump surrogate is demanding that criminal charges be brought.

Welcome to the world of tit-for-tat criminalization of political differences.

It’s just as wrong to use this dangerous tactic against Democrats as it is against Republicans, but don't expect to hear the same convoluted arguments in favor of an expansive view of “fraud” from the “get Trump” zealots as they are making with regard to prosecuting Trump for obstruction of justice.

Both statutes require vague accordion-like criteria, such as “fraudulent intent” and/or “corrupt motive,” which are capable of being expanded or contracted depending on who is being targeted.

Welcome to the world of tit-for-tat criminalization of political differences. It’s just as wrong to use this dangerous tactic against Democrats as it is against Republicans. Both are wrong. And both are endangering the civil liberties of all Americans.

Here is the story with regard to the Sanders. In April last year a local Vermont news publication revealed that the Justice Department was looking into the possibility that Jane O’Meara Sanders – the wife of Bernie Sanders and former president of Vermont’s Burlington College – had previously made questionable financial disclosures in order to secure a loan for the liberal arts school she headed.

It was alleged that in seeking a $10 million loan in order to execute her plan of expanding the college, O’Meara Sanders inflated $2 million that she said donors had promised to repay the loans for the land purchase.

It has also been alleged that Bernie Sanders – who was the former mayor of Burlington – used his Senatorial office to help move the loan along. In May 2016, after securing the loan, the college was forced to close citing the “crushing weight of debt.”

It is important to note that the driving force behind calls for an investigation into the Sanders' has been attorney Brady Toensing – the vice chair of the Vermont Republican Party and Donald Trump’s Vermont campaign chair.

In a four page letter (with additional exhibits) addressed to the United States Attorney for the District of Vermont, Toensing stated: “Ms Sanders’s privileged status as the wife of a powerful United States Senator seems to have inoculated her from the robust underwriting that would have uncovered the apparent fraudulent donation claims she made.”

He continued to argue: “this privileged status, however, should not inoculate her from the scrutiny, culpability and accountability of a federal investigation.” Now the Republican National Committee is circulating an attack memo against the Sanders’ that is reminiscent of the attack memos against Trump circulated d by the Democratic National Committee.

Let me be clear. I don't like Bernie Sanders. He forever disqualified himself from receiving my political support when he went to England to campaign for the anti-Semite Jeremy Corbyn; when he pushed for the appointment of Keith Ellison, who had worked with the anti-Semite Louis Farrakhan, as chair of the DNC; and when he appointed BDS supporter Cornel West to the 2016 Democratic platform committee.  I don't know whether he or his wife did anything wrong or criminal. But when a Republican political operative initiates a criminal investigation of a leading Democrat, my civil liberties antenna goes up.

I worry that conduct that would ordinarily be handled civilly— after all, fraudulent conduct gives rise to both civil and criminal sanctions, depending on the degree – becomes the subject of a criminal investigation for partisan political reasons.

Republican zealots try to get even with Democratic zealots who are investigating members of their party. The process of criminalizing political differences escalates on both sides, and the losers are the American people and their civil liberties.

So let’s declare a mutual disarmament. Let's stop deploying accusations of crime in questionable cases as the weapon of choice in the political wars now being waged by both parties.

Let's leave it to non-partisan, neutral prosecutors to decide on their own whether to conduct criminal investigations of grey area conduct based on established criteria and unambiguous statutes.

Let’s stop stretching already overbroad statutes to fit targeted political enemies. And let’s apply the age old and salutary principle of “lenity” to all conduct before prosecuting it as criminal.

The principle of lenity requires, according to the Supreme Court, that “ambiguity concerning the ambit of criminal statutes should be resolved in favor” of the person being investigated or prosecuted.

Under this principle, neither President Trump nor the Sanders’ should be charged with crimes based on ambiguous terms such as “fraudulent intent” or “corrupt motive.”

Criminal prosecution should be a neutral sanction of last resort, rather than a primary partisan weapon used to target political opponents.