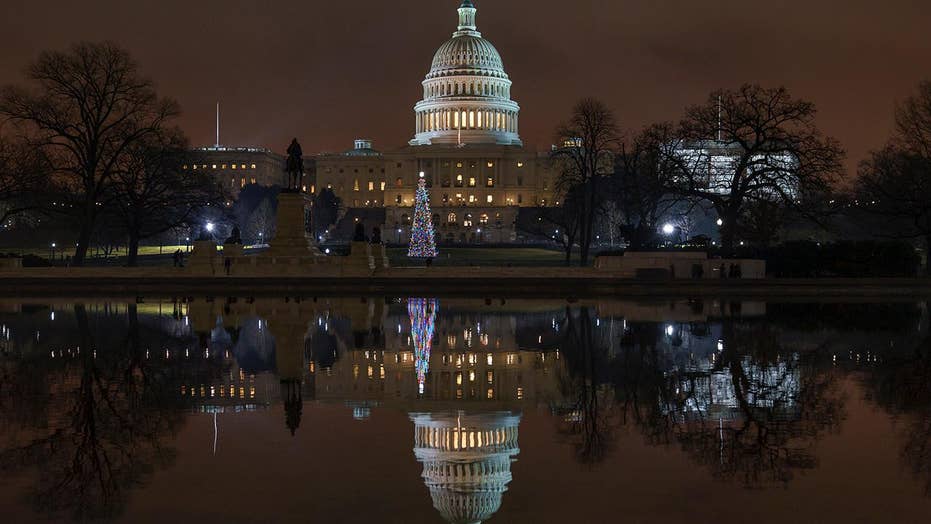 Partial government shutdown drags on: Can Republicans secure a deal with Democrats that includes funding for a wall?

Illinois Democrat Rep. Raja Krishnamoorthi says that polling shows the majority of Americans do not want a wall.

A major arrow remains in President Trump’s quiver as the partial government shutdown drags on: He should address the nation from the Oval Office’s Resolute Desk regarding the border wall.

This event would give the president perhaps a half-hour of America’s undivided attention on today’s biggest topic. Cable news networks certainly would carry this speech live. So should the Big Three networks: ABC, NBC, CBS. If they do, terrific. Tens of millions would see him make his case in one of America’s most hallowed settings. If the networks chose not to carry the address, this vividly would confirm what the president and his supporters have said since 2015: ABC, CBS, and NBC are populated with Trump foes who never miss a chance to hammer him. Either way, this would be a huge win for Trump and Republicans.

The president should tell his fellow Americans why Democrats should stop resisting the $5.7 billion in wall funds that the House approved on December 20. He should start by recalling that 26 Senate Democrats — including Minority Leader Chuck Schumer of New York, and then-senators Joseph Biden of Delaware, Hillary Clinton of New York, and Barack Obama of Illinois — voted for the Secure Fence Act of 2006, including 700 miles of “at least two layers of reinforced fencing, installation of additional physical barriers,” and other safety measures. The bill’s stated purpose: “To establish operational control over the international land and maritime borders of the United States.”

“Between 2005 and 2009, a vast amount of progress has been made on our borders and ports of entry,” Schumer bragged to students at my alma mater, Georgetown University, in 2009. “This progress includes...construction of 630 miles of border fence that create a significant barrier to illegal immigration on our southern land border.”

“I voted numerous times when I was a senator to spend money to build a barrier to try to prevent illegal immigrants from coming in.” She added: “I do think you have to control your borders.”

Next, the president should discuss why a southern border wall (or a “steel shield” fence) concerns more than just the rule of law. Immigrants should arrive legally, and no one should jump the citizenship queue ahead of those invited into our country.

(Showing videotape of these Democrats’ vintage comments would tie Trump’s tormentors in knots.)

Trump should detail the thousands of people apprehended at the border from Iran, Sudan, Syria, Yemen, and other exciting locales. Some of them might make model citizens. Others might make model terrorists. Who knows? Non-vetting maintains this mystery. The Center for Immigration Studies and Politifact have published long, chilling lists of the potentially deadly characters who have tried to smuggle militant Islam across America’s southern front.

It would be extremely persuasive for Trump to present mug shots of suspected Muslim terrorists whom federal officials have arrested at the border and/or who entered America illegally.

Trump also should show photos of people killed by illegal aliens. Whether illegal aliens in the aggregate are more or less dangerous than U.S. citizens is irrelevant. If a wall had barred illegal-alien killers from America, Sarah Root, Kate Steinle, Police Corporal Ronil Singh, and thousands of others would be celebrating the new year, not lying dead. Highlighting the bereaved Angel Families' stories of their deceased loved ones would bring Americans to tears.

If such an Oval Office speech prompted total victory or a decent deal on the wall and the shutdown, then hallelujah.

If, instead, the president must sign a budget measure with little to no wall money, at least his GOP/conservative base would know that he gave this issue a final, hefty push.

President Trump has set an admirable example by staying at the White House throughout the shutdown, save for his surprise visit with U.S. troops in Iraq and Germany. In contrast, Nancy Pelosi has luxuriated at Kona, Hawaii’s Fairmont Orchid Hotel, where rooms start at $489 per night.

While a disappointment on the wall would be poor policy, the president at least would limit the political damage by showing his supporters that he worked hard for what he and they support.

On this proposal, President Trump should ponder the same question he once asked voters: “What the hell do you have to lose?”