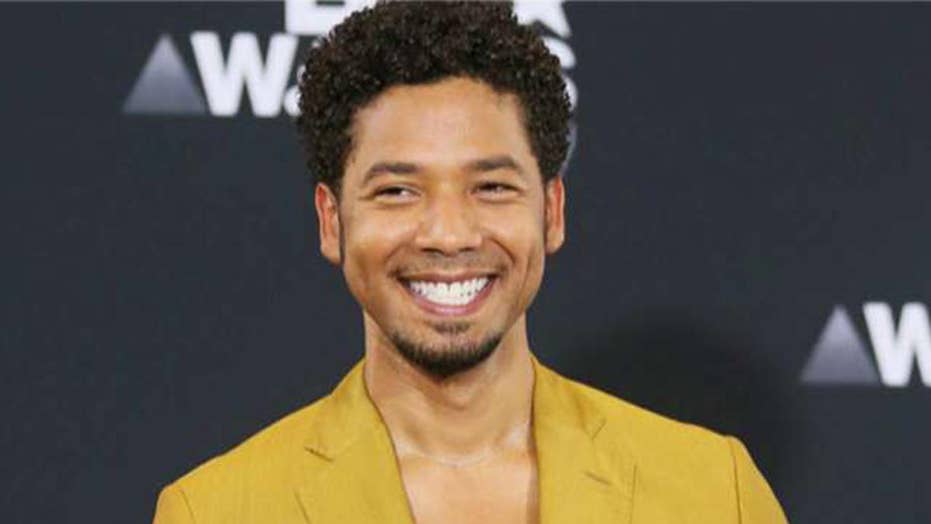 Lesson one of L’Affaire Jussie Smollett: A rush to misjudgment makes fools rush in.

What began three weeks ago as a national outrage over an apparent hate crime has devolved into criminal charges filed Wednesday night against the man initially considered this saga’s victim. Smollett, 36, now faces one count of felony disorderly conduct, for filing a false police report. Chicago officials expect Smollett to surrender and be arrested Thursday afternoon.

Smollett, a black, gay, Trump-loathing actor best known for his role on the TV show “Empire,” claims that he was walking to his Chicago apartment at 2 a.m., after getting a sandwich at a Subway shop.

That’s when, Smollett says, two men, one in a black mask, called him “Empire f----- n-----,” beat him, slipped a white rope around his neck, and poured “an unknown chemical substance” on him, according to the police incident report. As he was punched, Smollett says, one of these men announced: “This is MAGA country.”

First, how did these men know that Smollett is gay? Or was this just a lucky guess?

Also, Chicago is not exactly MAGA country, any more than Provo, Utah, is “I’m with her” country.

Another detail: That night was downright Arctic. During this alleged assault, it was about 9 degrees Fahrenheit, with 12 mph winds. This yields a wind chill, according to the National Weather Service, of about four below zero. Temperatures were plunging that morning, en route to 0 degrees at 6:53 a.m., amid a well-publicized polar vortex that found most Chicagoans barricaded in their homes.

What a coincidence that Chicago’s frozen streets were mainly empty, and yet a black, gay, Trump foe would cross paths with a pair of anti-black, anti-gay Trump fans in a city that handed Trump a whopping 12.5 percent of its votes in November 2016. And – oh, yes – those two hoodlums just so happened to have a rope on hand, plus a bottle of what now seems to be bleach.

Bleach: Never leave home without it.

Despite these abundant questions and anomalies, political and media luminaries on the left pounced. They denounced this episode as, essentially, the handiwork of Donald J. Trump, his allies and supporters.

President Trump, she continued, is “separating and dividing, and he is basically emboldening those folks who feel this way, maybe never said and never talked about it, never could act it out, but now they’re on it.”

Rep. Rashida Tlaib, D-Mich., said: “When one of the most famous black and gay men in America is not safe, the message is clearer than it has ever been. The dangerous lies spewing from the right wing is (sic) killing & hurting our people.”

The same day that this scenario unfolded, GQ magazine published Joshua Rivera’s rant on “the blind rage of late-stage whiteness” beneath this incendiary headline: “The Racist, Homophobic Attack on Jussie Smollett Is Far-Right America’s Endgame.”

Rivera complained bitterly that police called this a “possible hate crime.” He moaned: “The cautious wording is one last wound inflicted on Smollett’s battered body, a careful hedging of bets that don’t need hedging – a crime scene involving a corpse is not discussed as a ‘possible death.’”

Criticizing “the vice president of America” and his views on gay rights, actress Ellen Page told CBS “Late Show” host Stephen Colbert: “If you are in a position of power, and you hate people, and you want to cause suffering to them – you go through the trouble, you spend your career trying to cause suffering – what do you think is gonna happen? Kids are gonna be abused, and they’re gonna kill themselves. And people are gonna be beaten on the street.”

Pence prodded the Hoosier State’s Legislature to pass a repeal measure, which he signed that April 2. So, it took Pence one week to do precisely what gay rights activists wanted, and yet they still drop-kick him in the teeth for it.

These folks, and others on the left who zoomed to Smollett’s defense, should feel rather silly, now that his tall tale has unraveled. Chicago police announced earlier this week that they no longer consider Smollett a victim. Two brothers, Olabinjo and Abimbola Osundairo, were arrested as possible suspects. But the clearly non-white gentlemen of Nigerian ancestry were released without charges.

“We are not racist. We are not homophobic, and we are not anti-Trump,” the brothers told CBS News in a statement. “We were born and raised in Chicago and are American citizens.”

Someone eager to catch his tormentors should itch to speak with the police – as often as necessary. However, Chicago cops tried to get Smollett to sit down for a follow-up interview.  Instead, he hid behind his attorneys.

As Smollett’s lawyers, Todd Pugh and Victor Henderson, stated: “Smollett’s attorneys will keep an active dialogue going with Chicago police on his behalf.”

Interrogation is for losers! Far better to have one’s lawyers engage in “active dialogue” with inquisitive cops.

Furthermore, news reports now indicate that Smollett paid the Osundairo brothers to bash him and may have rehearsed this, perhaps to gain attention, turbocharge his career, and bathe in the glory and self-affirmation of victim status – the social justice equivalent of the Bronze Star.

Smollett might have had another motive: to savor these personal benefits, at the expense of his arch-nemesis, President Trump. Smollett is virulently, obscenely anti-Trump. Consider some of what he has said about the president of the United States, via Twitter:

• “Shut the hell up you b---- a-- n----. You will continue to run this country further into the ground and risk lives every time you breathe. You’re not the president. Just a dumpster full of hate. FOH. [F--- outta here] Sick to my stomach that literal s--- currently represents America to the world.”

(This also confirms that Smollett has no idea what “literal” means.)

• “@AOC is only speaking facts. This is so far beyond political party affiliation. Across the world ... no matter the border ... from sea to shining sea ... 45 and all his white hooded cohorts are a national disgrace. And if you support them ... so are you. Clowns.”

Given this extreme animosity against Trump, it  hardly is surprising that Smollett appears to have scripted this fictional mayhem and then penned a disturbing line of dialogue to be uttered by one of his story’s villains: “This is MAGA country.”

For nearly three weeks, those four words smeared Trump, his circle of advisers and associates, and the 63 million Americans who voted for him – even though zero evidence ever emerged that even one of these millions of people laid a cuticle on Smollett.

Smollett’s attorneys issued a statement Sunday that now looks comical: He has been “further victimized,” they said,  by accusations that “Jussie played a role in his own attack. Nothing is further from the truth and anyone claiming otherwise is lying.”

If convicted for the charge that a Cook Country grand jury handed down on Wednesday evening, Smollett deserves the full three years in prison due to anyone guilty of filing a false crime report — a Class 4 felony under 720 Illinois Compiled Statutes 5/26-1(a)(2-10).

Beyond this, Jussie Smollett deserves the immediate termination of his career and the entire nation’s permanent, unbridled revulsion for needlessly grinding rock salt and Tabasco sauce into America’s perpetually reopened racial wounds and ever-widening political divides.