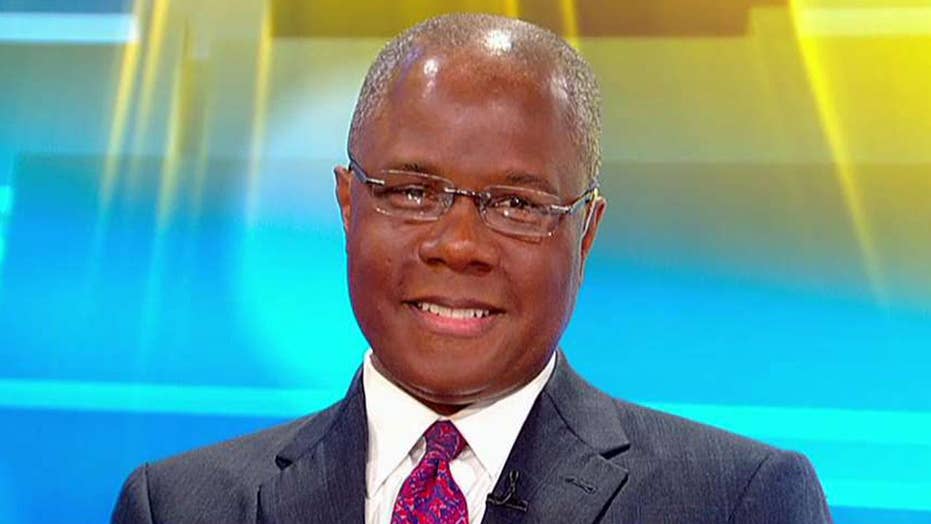 Syndicated columnist and Fox News contributor Deroy Murdock has a reality check for Democrats using race as a divide and conquer campaign strategy.

Former Vice President Joseph Biden detonated a stink bomb on the campaign trail. Stumping in South Carolina for the 2020 Democrat presidential nomination, Biden earlier this month criticized GOP voter-integrity efforts. Thanks to Republicans, he told voters, “You’ve got Jim Crow sneaking back in.”

This comment paired nastily with Biden’s comments before black voters in Virginia in August 2012. He said that if that year’s GOP nominee, Mitt Romney, and Republicans won the election, “They’re gonna put y’all back in chains.” Biden absurdly suggested that Republicans long to restore slavery.

Biden must have forgotten his U.S. history. Here is a badly needed booster shot.

Jim Crow “snuck in” in the first place because Democrats – members of Biden’s party – wrote, signed, and brutally enforced the South’s Jim Crow laws. This mayhem was 100 percent the bloody work of Democrats, not Republicans.

Republican Abraham Lincoln commanded the Union Army in the Civil War. It crushed the Confederacy and, thus, removed the chains that Democrats had slapped onto the arms and legs of blacks.

After the failures of Presidential Reconstruction under Lincoln’s successor, Democrat Andrew Johnson, the GOP’s Radical Reconstruction program began in the South in 1867. Under Republican leadership, some 4 million emancipated slaves were empowered, elected to state-level offices, and even sent to Congress. Radical Reconstruction began to integrate these freed blacks into society and improve their lives.

History.com called this period “a large-scale experiment in interracial democracy unlike that of any other society following the abolition of slavery.” The GOP’s Radical Reconstruction yielded “the South’s first state-funded public-school systems, more equitable taxation legislation, laws against racial discrimination in public transport and accommodations, and ambitious economic development programs (including aid to railroads and other enterprises).”

This all stopped in 1877, in the aftermath of buoyant Southern white-Democrat power, a Democrat U.S. House of Representatives, and Democrats’ insistence that Reconstruction end before they would certify the hotly contested election of Republican presidential nominee Rutherford B. Hayes. Democrats killed Reconstruction, enacted Jim Crow segregation laws, and deployed their terrorist wing – the Ku Klux Klan – to oppress and murder black men, women, and children, all while Democrats cheered.

If Joe Biden is going to invoke Jim Crow, he should start by apologizing for his party’s – the Democrat Party’s – central and indispensable role in inflicting the entire, racist Jim Crow structure on black Americans for 87 grueling years: 1877-1964.

So, if Joe Biden is going to invoke Jim Crow, he should start by apologizing for his party’s – the Democrat Party’s – central and indispensable role in inflicting the entire, racist Jim Crow structure on black Americans for 87 grueling years: 1877-1964.

As for Biden’s underlying claim that Republicans are practicing voter suppression if so, they are failing miserably.

Last fall, black and Hispanic voter turnout was way up, notwithstanding voter ID laws, removal of dead and relocated citizens from voter rolls, and, in some places, curbing early voting in favor of having Americans choose their leaders once they can make fully informed decisions: On Election Day. (In North Carolina, 2016’s early voting began that September 9, 17 days before the first Clinton-Trump debate. Disgusting.)

According to Pew Research Center, the share of blacks who voted in last year’s midterm elections soared from 40.6 percent in 2014 to 51.4 percent in 2018. That represents a 26.6 percent boost in black voter turnout last November.

In the 2014 midterm elections, blacks equaled 11.7 percent of the national electorate. Last November, that figure rose to 11.9 percent. Conversely, the white share of the national vote slid from 76.3 percent in 2014 to 72.8 percent in the 2018 mid-term general election. In short, last November’s voters, en masse, were more black and less white than in 2014.

“The nation’s voting population in 2018 was the most racially and ethnically diverse ever for a midterm election,” Pew explained. “Blacks, Hispanics, and Asians accounted for a record 25.0 percent of voters, up from 21.7 percent in 2014.”

So, Joe, where exactly is the GOP voter suppression?

In Georgia, Democrat Stacey Abrams keeps whining that racist Republicans cost her the governorship because they barred blacks from voting.

In 2014, 43 percent of registered black voters in Georgia cast ballots in the midterm election. In 2018, that number soared to 60 percent.

A key reason that Republican Ron DeSantis beat Gillum is that DeSantis asked for the votes of “school choice moms.” These are black mothers to whom DeSantis promised educational reforms, starting with more robust school-choice options.

This lesson should be learned, internalized, and acted upon by every Republican candidate between now and November 2020 – from President Donald J. Trump down to those seeking town-council seats.

As part of its 24/7/365 anti-GOP smear campaign, the left still claims that there is no need for voter ID or other ballot-integrity measures – since there is no such thing as voter fraud. Tell that to the 1,037 people convicted of vote fraud in the Heritage Foundation’s database on that topic.

Rather than evoke Jim Crow, in a cynical and revolting ploy to terrify blacks into voting for Democrats, Joe Biden should present a positive agenda that would outperform President Trump’s pro-growth policies. Trumponomics is reducing black poverty and fueling black prosperity – amid recent, record-low black unemployment. If Biden has better ideas, we’d all love to see the plan.