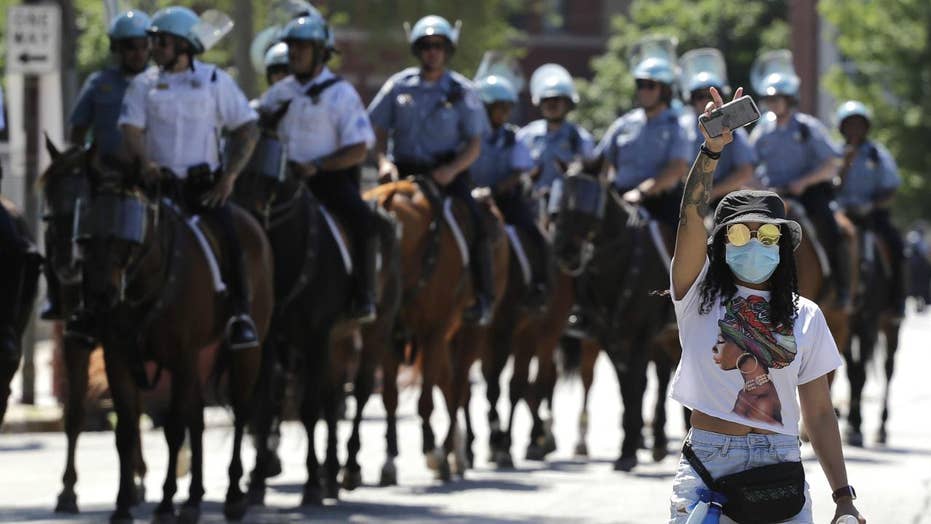 The unanimous national disgust at the killing of George Floyd beneath the knee of Minneapolis Police Officer Derek Chauvin has devolved into something completely different.

In an apparent collective nervous breakdown, self-flagellating white Americans have concluded that Floyd’s death somehow confirms their own racism, which they are busy exorcising.

Quasi-religious rituals have found whites on bended knees apologizing to blacks for being white.

GREG GUTFELD: THE NARRATIVES OF MADNESS

Nervous Nancy Pelosi and leading white congressional Democrats did as much inside the U.S. Capitol Tuesday while wearing “culturally appropriated” Ghanaian Kente cloth.

House Speaker Nancy Pelosi of Calif., center, and other members of Congress, kneel and observe a moment of silence at the Capitol's Emancipation Hall, Monday, June 8, 2020, on Capitol Hill in Washington, reading the names of George Floyd and others killed during police interactions. (AP Photo/Manuel Balce Ceneta)

Perhaps a thousand white people in Bethesda, Maryland, sat their backsides in a library parking lot, held their hands high, and vowed aloud: “I will use my voice in the most uplifting way possible…I will love my black neighbors the same as my white ones.”

In Cary, North Carolina, white cops and community members knelt before and washed the feet of two black pastors.

Several young white friends tell me that they must embrace Black Lives Matter daily on social media, lest they endure accusations of racism.

“I wish I was [sic] black, today more than ever,” Lebanese singer Tania Saleh said via Instagram. “Sending my love and full support to the people who demand equality and justice for all races in the world.”

Saleh appeared beside that message in a photoshopped picture with dark brown skin and an Afro as big as the early 1970s.

One Turkish personality in mocha-colored body makeup offered this comment: “In a racist society, it is not enough to just say that you are not racist. One should be loudly against racism!”

Back home, HBO Max stashed “Gone with the Wind” in a vault on June 9.

After considerable backlash, the film will return soon, with a black scholar’s new introduction.

MGM’s 1939 classic is the highest-grossing motion picture ever made, adjusted for inflation.

At least for now, her triumphant performance is gone with the wind.

If America really is so deeply, systematically, irretrievably racist, why did 43 million white voters help elect Obama president in 2008?

Rather than sandblast America’s cinematic heritage, why not put this trigger warning on such productions, for those who need it? “Artists created this work decades ago. Watch. Learn. Discuss.”

Even graver cultural vandalism has involved the Red Guard-style defacement and destruction of monuments and sculptures including those of Christopher Columbus, Confederate President Jefferson Davis, and idiotically, the Great Emancipator Abraham Lincoln, abolitionist Matthias Baldwin (thugs painted his face red and graffitied “colonizer” across his Philadelphia statue), and several tributes to Union Army soldiers who helped crush the slave-owning South.

Amid this devastation, she used Twitter Wednesday to address nihilists toppling a statue of Columbus at the Minnesota State Capitol:

“I’m a professor who studies the deliberate destruction of cultural heritage and I just have to say...use chain instead of rope and it’ll go faster.”

Thompson is no better than the Taliban, who infamously dynamited ancient Afghan Buddha statues in March 2001.

These recent, dramatic displays disparage a country that no longer exists.

If America runs on racism, as the left insists, why doesn’t this country erase any trace of the black contribution to this society? Instead, every February is Black History Month, filled with news articles, lesson plans, radio shows, TV programs, and more on how blacks helped to build America as we know her today.

A white-supremacist nation would have sandbagged the Smithsonian Institution’s Museum of African American History and Culture. Instead, the federal government spent some $270 million on this establishment before it opened in September 2016.

If America is so insufferably racist, how is it that Lester Holt anchors “The NBC Nightly News?”

How does Don Lemon host a CNN program every evening?

Why are so many black musicians, actors, and athletes worshipped, rather than reviled, by white fans?

How do millions of other non-famous blacks succeed in so many walks of life — quietly but concretely?

If America really is so deeply, systematically, irretrievably racist, why did 43 million white voters help elect Obama president in 2008?

If America is merely apartheid-era South Africa with four time zones, why did President Donald J. Trump bother to establish 8,760 Opportunity Zones to revitalize economically distressed communities, many of them black?

How did America’s institutionalized racism let Trump provide school-choice options for black kids in K-12 schools, and long-term federal funding and other benefits for Historically Black Colleges and Universities?

Why didn’t America’s genetic prejudice stop blacks and Hispanics from achieving the lowest unemployment ever recorded, before a Chinese virus rolled in and junked the U.S. economy?

Shouldn’t America’s racist ways have sandbagged the First Step Act, a criminal-justice reform measure, before Trump signed it into law, which Obama and Biden utterly failed to do in eight years?

The president of a systematically racist nation never would have made black lives better. And if he did, he would shut up about it, rather than trumpet these policies at rallies full of his allegedly bigoted supporters.

Will this nation ever entirely expunge racism? Probably not.

So, as beautiful as it would be, racism is as unlikely to vanish from America as anywhere else.

But, for all the grief, pain, and even death that it still causes, is American racism widespread, systemic, and institutionalized?

America’s streets have been clogged with peaceful protesters since George Floyd’s killing.

Corporations from Amazon to NASCAR to Zoom have backed Black Lives Matter. Whites have scrubbed black feet and not just during pedicures.

These facts, and many more, indicate that the vast majority of Americans are not racist and are eager to exhibit themselves as such.

America desperately needs more hands of friendship extended across ethnicities and far fewer screams that people are racist merely because they sprang from their mothers’ wombs with white skin.

Remember: No white person ever asked to be born that way.