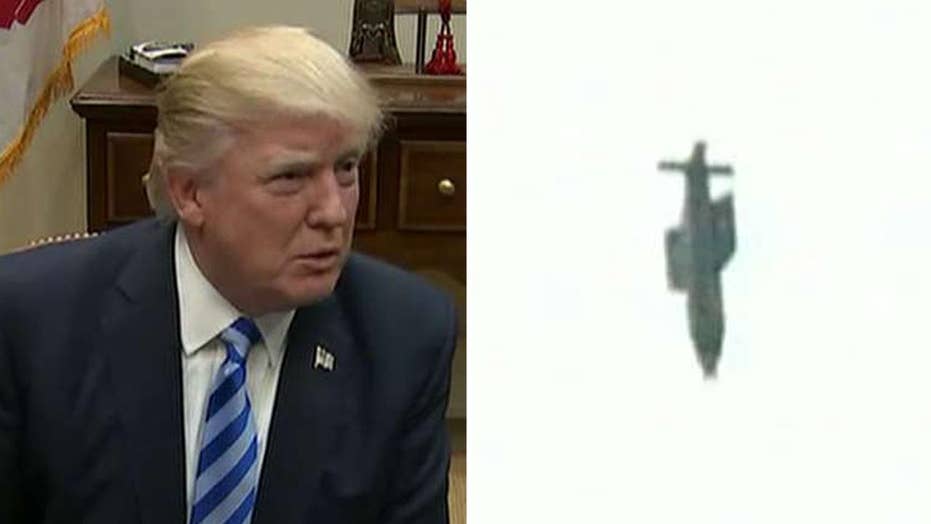 What did Trump accomplish with the MOAB?

The military dropped the 'Mother of All Bombs,' its largest non-nuclear bomb on an ISIS tunnel complex in eastern Afghanistan. But why now and now what? #Tucker

President Donald Trump has inherited wars from both Republican and Democratic presidents who have taken us down a dangerous path in the Middle East, which has helped radicalize the region and keep us at war.

President Bill Clinton’s harsh sanctions on Iraq resulted in the deaths of 500,000 children. Those deaths were among Usama bin Laden’s reasons for attacking the U.S. on 9/11.

President George W. Bush initiated a war in Iraq which led to the death of over 1,000,000 Iraqis.

President Barack Obama continued the war in Iraq and Afghanistan, while starting other wars in Libya and Syria (covertly). He escalated international drone strikes, allegedly even marking specific rebels for death from a special deck of face cards.

Obama’s exercise of power was cold, subtle, sudden and deadly, hardly the mark of a sissy.

Yes, we need to deal with ISIS. However, what most Americans do not understand is that the CIA has provided covert support, weapons, materiel, and money for so-called “moderate” rebels, who became ISIS, Al Qaeda and Al-Nusra.

The U.S. did this in cooperation with our allies, Saudi Arabia, Turkey and Qatar, in order to overthrow the Syrian government, which, for all of its faults protected the freedom to worship.

The surest way to diminish ISIS is through cutting off their funding, which is exactly what legislation proposed by Rep. Tulsi Gabbard and Sen. Rand Paul would accomplish. If ISIS fighters are deprived of money and material, they will soon head home to the dozens of nations from whence they came.

Enter President Trump. The show of brute military strength demonstrated with the dropping of the “mother of all bombs” in Afghanistan may or may not instill fear in ISIS, but it certainly is causing alarm among many in America and around the world who sense that this display of almost supernatural military power might bring us a step closer to World War III.

Wouldn’t it be wiser, if we are serious about making America safer, that we actually investigate why young men from around the world are joining ISIS, Al Qaeda and Al-Nusra?

Perhaps there is a better way than trying to bomb them and their ideas out of existence, especially since, despite protracted war, their ranks continue to be filled.

In world capitals, the U.S.' sensational use of such a powerful weapon will be cause for concern, because it licenses larger aggressive actions on the part of both non-state and state actors.

The unprecedented use of such a blockbuster can endanger Americans abroad, including our military on 800 bases in 130 countries. Our troops are now more of a target. It also makes security here at home a bit more dicey. No nation can use a weapon of this power against another nation without creating great animosity, desire for retribution and an escalating world-wide arms race.

The U.S. ushered in the age of nuclear weapons when it dropped two atomic bombs on Japan. Several of our leading generals at the time declared the war was already at an end and the bombs did not have to be dropped.

In the wake of the bombings of Hiroshima and Nagasaki, several other nations, notably Russia, began spending billions on the research, development and production of nuclear weapons to protect themselves from annihilation.

Today, Russia and the U.S. possess such fearsome destructive capacity that nuclear weapons could destroy life on our planet. We are not alone. In total, nine nuclear nations possess over 15,000 nuclear weapons.

Just think of how our leaders presently express concern over nuclear threats coming from North Korea. We have actually dropped the “mother of all bombs” on Afghanistan and all eyes are on America. If we monger war we will surely receive it in abundance.

Russia, in response to the U.S. development of the “mother,” has developed the “father of all bombs” which supposedly has five times the devastating power of mother. Not to be outdone, the U.S. has taken steps to have a new “mother” brought forward, this one weighing 30,000 pounds.

How unbelievable it is to live in a time where the life-creating symbols of mother and father became the agencies of the destruction of life. Our metaphors are signposts to the end of the world.

Before our leaders act in fulfillment of the Apocalypse, I think a few questions are in order.

How, after a campaign where he repeatedly questioned America’s adventures in Iraq and Libya — including warning President Obama not to strike Syria after an alleged government use of poison gas — did President Trump get trapped in these wars?

How, after questioning the workings of the Pentagon and the CIA, and being the victim of government leaks, does he permit leaks and disinformation to take us to the brink of war?

How, after promising a new opening for peace with Russia, is he being dragged into a showdown with Russia in Syria, amid a hailstorm of phony stories about Russia tilting the US election?

Is President Trump really in charge, or is the permanent bureaucracy in the Pentagon, the CIA and the State Department now running policy while they take advantage of his inexperience?

These are not insignificant questions. The moment is ripe with portent: Expanded wars in Afghanistan, Iraq, Syria, Somalia, Yemen, Sudan. Potential conflict with North Korea, Russia, China, and Iran.

As more Americans become aware of the danger of a world-wide conflict, their thoughts naturally turn to home and family and the beauty not of bombs, but to the beauty, the preciousness of life itself. I think we have that in common with most people around the world. It is this awareness of a commonality which brought President Kennedy and Soviet Premier Nikita Khrushchev to end the 1962 Cuban Missile Crisis and avoid nuclear war.

The bombing is accelerating in country after country and the death toll of innocent civilians continues to rise and with it the resentment against America continues to grow, and unless we soon reverse course, forces will be unleashed globally which will be irretrievable.

The repercussions of the dropping of the ‘Mother of All Bombs’ on a village in Afghanistan will be felt in conflicts small and large. We live in a global village. ISIS may be the target, but the collateral damage may include ourselves.