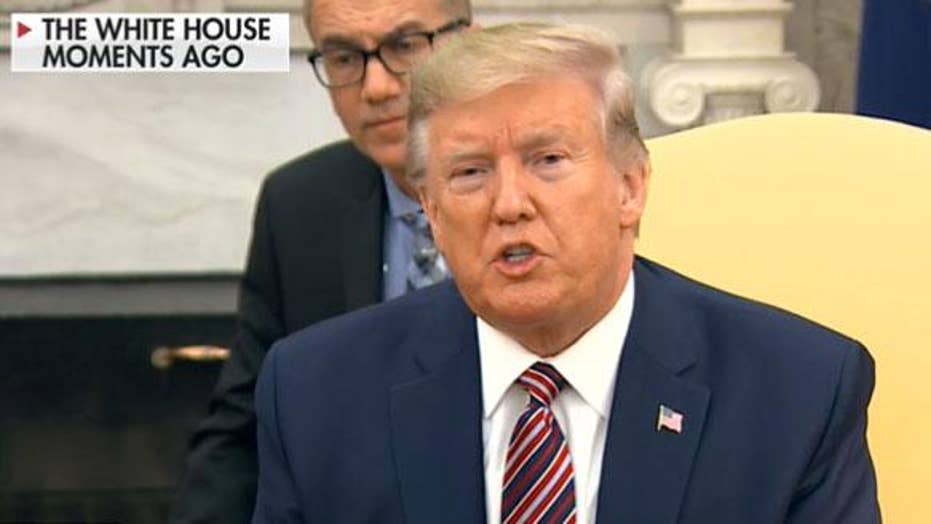 Democrats aren’t capable of walking or chewing gum, much less doing both at once.

“Congress can walk and chew bubblegum at the same time,” Sen. Bernie Sanders, I-Vt., said during the most recent presidential debate, becoming the latest in a long line of Democrats to have uttered the hackneyed assurance that their party can still make progress on policy issues while pursuing the impeachment of Donald Trump.

House Speaker Nancy Pelosi trotted out the cliche in May, and ever since then Democrats have been repeating it ad nauseam.

ANDY PUZDER: NAFTA DESPERATELY NEEDS TO BE REPLACED. SO WHY IS DEMOCRATIC LEADERSHIP STANDING IN THE WAY?

Sen. Cory Booker, D-N.J., used the same expression during the September debate. Former HUD Secretary Julian Castro is so enamored with the phrase that he brought it up during the July debate, the October debate, and in multiple interviews leading up to the November debate.

Of course, if the Democrats could really pull off that feat, they wouldn’t need to spend so much time assuring people that they can — they’d simply do it. Contrary to their boasts, the Democrats are violently choking on their gum while stumbling blindly toward defeat in the 2020 elections.

Despite countless “bombshells” and day after day of testimony from their hand-picked witnesses, the Democrats have utterly failed to make a case for impeaching President Trump. All their partisan impeachment inquisition has accomplished is to reinforce pre-existing partisan divisions. Meanwhile, they’ve completely neglected the interests of the American people, obstructing policies that would strengthen the middle class and refusing to cooperate with the White House on pressing bipartisan priorities such as reducing healthcare costs and funding infrastructure modernization.

One such policy is the U.S.-Mexico-Canada Agreement (USMCA). According to the International Trade Commission, the trilateral trade deal would boost our economy by a whopping $68.2 billion while creating 176,000 new jobs across the country.

Despite repeatedly assuring the public that Democrats were committed to approving the deal, Pelosi has stonewalled for months, throwing up roadblocks instead of accepting the president’s offer to work out a compromise. Now, Pelosi says there might not be time to approve the USMCA before the end of the year even if she accepted a deal. Given a golden opportunity to prove that they could “walk and chew gum at the same time,” Democrats let vital legislation languish while they indulged their impeachment obsession.

Given a golden opportunity to prove that they could “walk and chew gum at the same time,” Democrats let vital legislation languish while they indulged their impeachment obsession.

The USMCA would pass easily if Pelosi allowed members to vote on it, with almost half the Democratic caucus ready to join Republicans in supporting it. It’s the very definition of low-hanging fruit for lawmakers.

The president has also made it clear that he is willing to work with congressional Democrats on measures to reduce prescription drug prices, yet those efforts, too, have been effectively sidelined by the impeachment circus.

Democrats don’t even have anything to show for their obstructionist theatrics. The impeachment spectacle failed to sway either Republican lawmakers or independent voters, setting up a party-line House impeachment vote that is all but certain to result in acquittal by the Senate.

Taking a walk while chewing gum is supposed to be easy, but it’s clearly proving to be beyond the capabilities of the Democratic Party.

Charlie Kirk is the founder and executive director of Turning Point USA, an advocacy group for young conservatives.