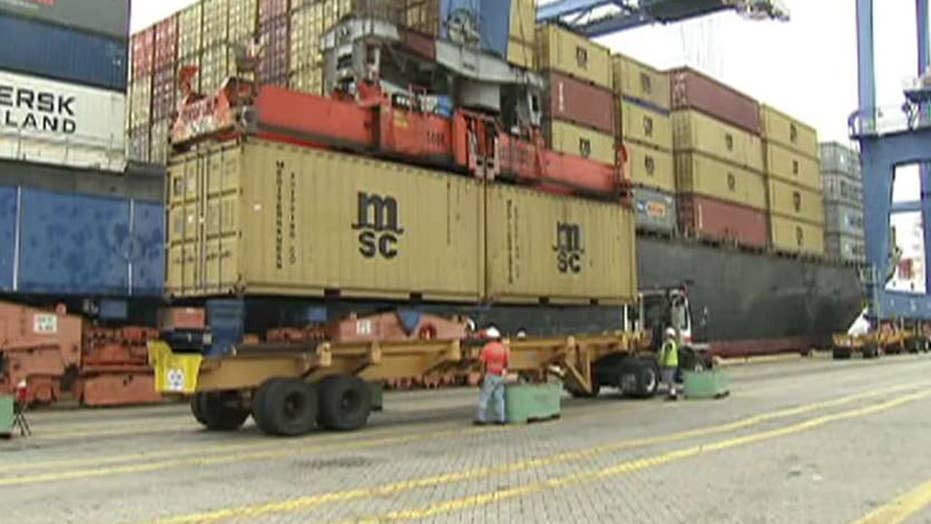 What's in, what's out of new USMCA trade deal?

As the governor of Alaska – a state with a flourishing international trade sector – I am pleased to stand with 27 of my fellow governors in calling on Congress to ratify the United States-Mexico-Canada Agreement negotiated by President Trump.

Alaskans export nearly $5 billion worth of commodities each year – enough goods to put the Last Frontier among our nation’s largest exporters on a per capita basis. After factoring in an additional $2 billion of imports, trade accounts for over 12.5 percent of Alaska’s gross domestic product.

Of this trade activity, Alaskan businesses deliver $707 million worth of products to our Canadian neighbors, making a continental free trade agreement critical to our state’s economy. But the raw dollar values only tell half the story.

ANDY PUZDER: NAFTA DESPERATELY NEEDS TO BE REPLACED. SO WHY IS DEMOCRATIC LEADERSHIP STANDING IN THE WAY?

Over 70 percent of Alaska’s goods exporters are small- to medium-sized companies, and 37,100 jobs depend on these exports. Many of these jobs are located at Ted Stevens Anchorage International Airport (ANC), which handles 87,000 landings and up to 6 million tons of snow each year.

Located within 9.5 hours of nearly all destinations in the industrialized world, ANC is the fifth-busiest cargo hub in the world.

As a steward of this great state, I am committed to supporting Alaska’s trade sector.

This summer, the Alaska Department of Transportation announced hundreds of millions of dollars in infrastructure upgrades at ANC. My office is also in the early stages of negotiating a rail link with Alberta that would allow for the safe transportation of crude oil from landlocked Canadian oil fields to Alaskan refining centers.

But the harsh reality is that state governments are limited in their ability to promote international trade. Congress must act to ratify a new trade deal. To that end, President Trump successfully renegotiated the aging North American Free Trade Agreement (NAFTA) nearly a year ago.

While NAFTA served Alaska well for a number of years, there is no doubt the 25-year-old agreement is past its prime. It is increasingly hurting Alaskan businesses with lax enforcement of illegal, unreported and unregulated fishing; failure to police fishing subsidies; and outdated intellectual property and digital trade rules.

Trump’s USMCA makes historic improvements in these areas. Since the 1990s, the United States has worked to eliminate fishing subsidies, which often cause dangerous overfishing problems. Unfortunately, much of the world has not followed suit.

These subsidies allow foreign canneries to operate at a loss and market their products at discounted prices, giving them a market edge over U.S. fishermen and processors. While the largest offender is plainly China, the USMCA would ensure that our continental neighbors are not destroying our shared oceans or the economies of our Alaskan fishing communities.

The updated agreement also strengthens customs inspections, making it more difficult for bad actors to engage in unregulated fishing. Additionally, new rules on pollution from ships would help protect our fisheries by holding our trade allies to the same high standards we apply to ourselves.

Combined, these benchmarks would help guarantee the future viability of North America’s commercial and sport fishing industries. And while fish may be Alaska’s largest export, many innovators would also benefit from the USMCA’s new intellectual property protections.

The unique challenges presented by Alaska’s sheer size and rugged environment have long driven technological progress. Examples of Alaskan’s pioneering spirit include GPS-based landings that were developed in the fjords of southeast Alaska; the 800-mile Trans-Alaska Pipeline, which features an assortment of groundbreaking safety features; and countless oil exploration breakthroughs.

The USMCA would protect advancements like these by requiring our continental trade partners to adopt our intellectual property laws. New measures include 15 years of protection for industrial designs, automatic patent extensions to mitigate bureaucratic delays, and further remedies when state-owned companies steal trade secrets.

Each of these protections requires no new legislation in the United States and would even the playing field across North America. Unfortunately, these commonsense measures are being blocked by House Speaker Nancy Pelosi, D-Calif., who refuses to bring the USMCA to the House floor.

Despite Mexico’s ratification of the deal in June, Democrats remain content to harm businesses in Alaska and other states by using the trade deal as a political pawn – a sharp contrast from when Republicans voted to give President Obama wide berth in negotiating the failed Trans-Pacific Partnership.

The good news is that Democrats may be ready to reverse their policy of economic obstruction, with Pelosi reporting that she is “on a path to yes.” After a nearly yearlong delay, let’s hope her path is a brief one.

It’s past time for Congress to set aside political games and deliver American workers the economic victory they deserve.