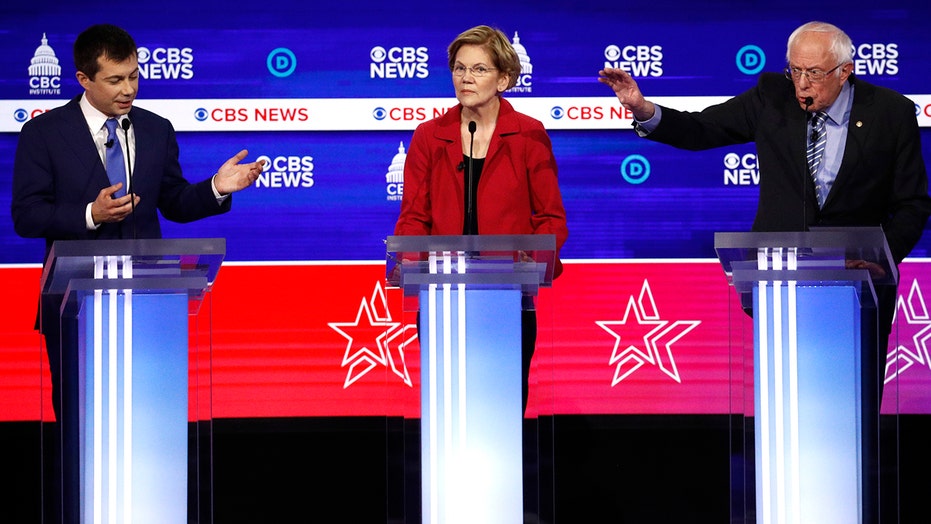 Candidates battle to stand out during South Carolina debate

Tuesday night’s Democratic presidential debate in South Carolina was a pressure-packed fight between seven far-left candidates. It was dominated by efforts to slow front-runner socialist Sen. Bernie Sanders’ charge to the party’s presidential nomination and to stop billionaire Mike Bloomberg from buying the nomination.

The hundreds of millions of dollars Bloomberg is spending on television and digital advertising can’t obscure the fact that he’s a disaster on the debate stage and can’t handle the hand-to-hand combat and incoming fire from other candidates.

Sen. Elizabeth Warren, D-Mass., resumed her role as Bernie Sanders’ chief defender in what looks like a not-so-veiled attempt to be chosen as his vice presidential pick if he is nominated to run against President Trump.

Sanders’ irresponsible $60 trillion in economy-destroying spending proposals – like the lie he calls “Medicare-for-all” – were even too much for the ultra-liberal candidates on the debate stage.

At the same time, billionaire donor Tom Steyer proved himself to be an embarrassment who just bought his way into the debate.

A victory by Sanders, I-Vt., in Saturday’s South Carolina primary would give him critical momentum heading into the 14 states holding primaries on Super Tuesday  March 3.

Recall that in 2016 Sanders lost the South Carolina primary to Hillary Clinton by an eye-popping margin of 74 percent to 26 percent. So a win Saturday would show that Sanders’ radical, high-tax, big-government message is growing in popularity among Democratic primary voters.

After the first three nominating contests in Iowa, New Hampshire and Nevada, Sanders is the delegate leader over former South Bend, Ind., Mayor Pete Buttigieg by a narrow 45 to 25 margin, but the energy in the race is clearly in Sanders’ corner.

The overwhelming majority of delegates are yet to be selected. A candidate will need the support of 1,991 delegates to win the Democratic presidential nomination on the first ballot at the party’s national convention this summer. If there is a second ballot in which 771 super delegates can also votes, the minimum needed to win grows to 2,375 delegates.

A total of 54 pledged delegates will be on the line in South Carolina. An enormous 1,357 delegates are in play in the Super Tuesday states of Alabama, Arkansas, California, Colorado, Maine, Massachusetts, Minnesota, North Carolina, Oklahoma, Tennessee, Texas, Utah, Vermont and Virginia, as well as American Samoa and Democrats Abroad.

But with just days to go before Saturday’s first primary in the South, the stakes for the Democrats in their debate Tuesday night couldn’t have been higher.

If former Vice President Joe Biden is unable to defeat Sanders in South Carolina – a state Biden has described as his firewall – his candidacy may be finished.

At the end of the day, Sanders is a washed-up socialist without an innovative idea in his arsenal or any major accomplishment under his belt.

It would then be entirely possible that the Democratic presidential nomination race will come down to two candidates whose loyalty to the Democratic Party is questionable at best.

Sanders, who calls himself a democratic socialist, has run as an independent in Vermont throughout his decades-long political career. Bloomberg was first elected as mayor of New York City in 2001 as a Republican.

Sanders has spent much of his time in the House and later in the Senate attacking establishment Democrats and their policies. Bloomberg once fully embraced the successful policies of his predecessor as mayor, Republican Rudy Giuliani.

However, if Biden – the career Washington politician – is able to pull a rabbit out of his hat and win the first primary in his 33-year quest for the White House, the Democratic race for the nomination would enter into a phase of unprecedented confusion and vicious negative attacks coming from all sides.

In fact, a Biden victory Saturday in South Carolina would open the door to the possibility of five candidates winning at least one state on March 3, since primaries that day will be held in the home states of Warren and Sen. Amy Klobuchar of Minnesota.

Winning just one state can provide much-needed oxygen to a candidacy on a downward trajectory. Just ask former Ohio Gov. John Kasich, who stayed in the 2016 Republican primary contest until May even though he only won a single primary – his home state – in March.

If Tuesday’s debate is any indication, Sanders should expect to be relentlessly attacked throughout the long primary season for his kind words about Fidel Castro’s brutal regime in Cuba and the communist empire of the former Soviet Union.

At the end of the day, Sanders is a washed-up socialist without an innovative idea in his arsenal or any major accomplishment under his belt. Other candidates on the debate stage Tuesday night pointed this out, stressing that a president needs to win support in Congress to make change happen – not simply talk about change that never occurs.

But the attacks the Vermont socialist received from his fellow Democrats Tuesday night pale in comparison to what President Trump will do to Sanders and his warped and dangerous ideology if Sanders becomes the Democratic presidential nominee.

Similarly, Bloomberg will continue to be picked apart for his previous support for the stop-and-frisk policy that resulted in many minority men in New York City being searched for weapons; for his controversial nondisclosure agreements concerning his company’s treatment of women; and for big campaign contributions he made to scores of Republican candidates for office over the years.

Moreover, if Biden remains a viable candidate he will receive renewed scrutiny over corruption charges in which he allegedly used his high office to help enrich members of his family through their shady business dealings in Ukraine, China and elsewhere.

A Democratic primary riddled with chaos is a dream come true for President Trump. The president stands as the leader of a unified Republican Party and can take credit for policies that have created a booming economy and record-low unemployment rates.

The president will continue raising money and adding to his monumental list of accomplishments throughout the spring as Democratic candidates still in the race inflict deep political wounds on each other that will be tough to recover from.

President Trump – the ultimate political outsider – was once again the winner in Tuesday’s Democratic debate. The president’s optimistic vision for the future and his America First policies are helping all Americans realize their dreams – and the Democratic presidential wannabees have absolutely no answer for the successes Trump has achieved.