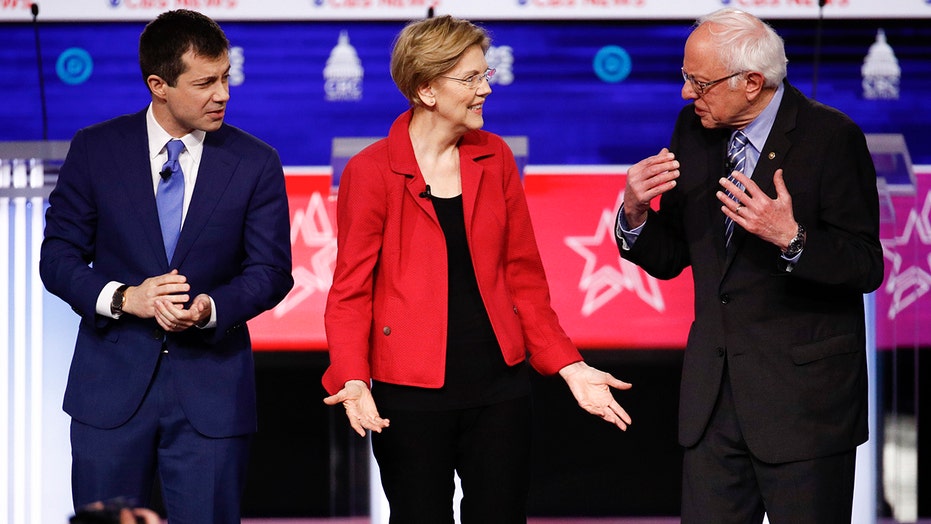 Bret Baier breaks down his top takeaways from the South Carolina debate.

There was a two-hour street fight in South Carolina Tuesday night that turned into something that resembled a debate between the seven leading Democratic presidential candidates.

The only way to view this final debate before the South Carolina primary Saturday and Super Tuesday March 3 is whether it changed the race for the Democratic presidential nomination. The answer that it did not.

But the only measure that matters is how the debate affects the race – especially when it could be over on Super Tuesday. The debate didn’t change anything for Sanders. And that made it a very good night for him.

It is remarkable that Sanders, on his second run for president, has hardly been vetted to this day. A series of interviews and articles leading up to the debate served to underscore that fact, as did his performance Tuesday night.

Sanders had trouble answering a number of questions about socialism, authoritarianism, guns, and how to pay for his costly health care and education plans. At one point he was booed and that rattled him more than any question.

But to stop Sanders from securing an insurmountable delegate lead on Super Tuesday, the competing candidate needed to derail or disqualify him in the debate. That didn’t happen. And that means it’s more likely than not that Sanders could wrap up the race for the Democratic presidential nomination next week when California – the most delegate-rich of the 14 Super Tuesday states – finishes counting its ballots.

Warren had another strong performance in the debate, making her case against Sanders and Bloomberg as well as for herself. While her attacks didn’t spark the fireworks of the debate last week, Tuesday marked the first time she drew strong contrasts between herself and Sanders.

Warren was very effective and very deft, but it is late in the primary campaign. Better late than never. But Warren will wish she had taken this approach a month ago. It would have served her well.

There’s no one better prepared with better plans and clearer ideas to do a good job as president than Warren. Unfortunately for her, that won’t get her enough delegates in the upcoming contests.

Biden had his best performance of late. He showed a lot of fight and that’s what his supporters needed to see – especially in South Carolina. No doubt Biden shored up his support going into the primary Saturday when he needs it most, leaning on his relationship with former President Barack Obama and his own record to make the case.

The fact is that the biggest threat to Joe Biden throughout this race has been Joe Biden. He didn’t sabotage himself Tuesday night and did what he needed to do. But that’s not likely to get him enough delegates to catch Sanders, even with a win Saturday.

Finally, it was another bad night for Bloomberg. It’s clear he went to debate camp to prepare for this one – but it didn’t work.

Yes, a few of Bloomberg’s lines were better than when he debated for the first time last week. But his canned jokes failed and his lack of awareness about his treatment of women was fatal.

Warren’s continued attacks on Bloomberg – specifically about his treatment of women – were met with more dismissive responses that were not only tone deaf but also wrong. In addition, the Bloomberg campaign ran ads during the debate that served to remind voters that the guy on the stage isn’t the guy in the ads.

Bloomberg is 0-2 in the debates and all the money in the world can’t fix it.

Here are the night’s biggest winners and losers:

What should trouble many Democrats about Sanders is his continued inability or unwillingness to address how he’s going to pay the $60 trillion for his promises and programs, including “Medicare-for-all.” Sanders is using the same answer he’s been using for weeks – ducking the details, joking about how much time it would take, referring to nickels and dimes in a condescending manner.

The lack of response to that question raises questions about Sanders’ unwillingness to release his medical records. In many way he’s much like Trump with a lack of transparency about matters that matter. Yet Sanders is on his way to the nomination to face Trump.

The strategy Warren employed Tuesday night is the one she should have been using for the past month: saying that while she holds similar positions to Sanders, she can turn those ideas into reality and get the job done.

With more time that approach could take a good number of votes from Sanders. And that could put Warren in the hunt for the nomination again.

There was no better debater on the stage than Warren as she made her case with substance and style that she employed once again in devastating fashion with Bloomberg.

In addition to raising more questions about Bloomberg’s treatment of women, Warren pointed out all the Republicans whose campaigns he contributed to, including Sens. Lindsey Graham of South Carolina and Pat Toomey of Pennsylvania. She noted that Bloomberg also made campaign contributions to former Sen. Scott Brown of Massachusetts, who was defeated by Warren.

No one has hurt Bloomberg more than Warren in the two debates he participated in and in the nomination race.

But it all may be too little too late for Warren. Barring a cataclysmic event in the next week or on route to the convention, Warren is unlikely to catch Sanders.

Biden had his best debate performance when he needed it the most. His performance should reassure South Carolina voters and that will help Biden in the primary Saturday.

South Carolina is considered a must-win state for Biden and he has said he will win. But even a big win in South Carolina isn’t likely to enable Biden to gain ground on Sanders, and that’s the name of the game.

At one point during the debate as it went to the first commercial break, Bloomberg checked his watch. This was reminiscent of President George H.W. Bush during a debate that marked the end of his chances to defeat challenger Bill Clinton.

The same could be true of Bloomberg. All the money in the world isn’t going to help Bloomberg win this race because in the end, you can’t hide the real Bloomberg.

The ads are a great substitute for Bloomberg. But the real Bloomberg has been revealed in these debates. Warren has shown him to be the antithesis of how he is portrayed in his nearly half-billion dollars of advertising.

It is the real-life person voters are casting their ballots for – not the one portrayed in ads. That’s the real problem for Bloomberg and it was on full display again Tuesday night.

Once again, Buttigieg -- the former mayor of South Bend., Ind.,-- delivered a serviceable debate performance with his well-packaged talking points and lines. But it didn’t change the challenges he faces in the upcoming contests with voters of color.

Instead, Buttigieg rang the alarm throughout the debate about the risks that face the country and the Democratic Party if Sanders is nominated. However, raising these concerns fell woefully short of what was necessary for him to be successful.

This adds to Buttigieg’s woes in the remainder of this campaign and keeps him in the cycle of moderate voter cannibalism that could deny all of the moderates the nomination.

The New Hampshire debate is now officially a one-hit-wonder for Sen. Klobuchar of Minnesota. Her performance in the two debates since that night fell short of that one, and so too will her prospects in the remaining contests as a result.

Like his fellow billionaire Mike Bloomberg, Tom Steyer has an endless reservoir of money to stay in the race. It has done little to improve his debate performance but it has put him in contention for third place in the South Carolina primary. That hurts Biden, Buttigieg and Klobuchar and it doesn’t help Steyer – but it does help Sanders.