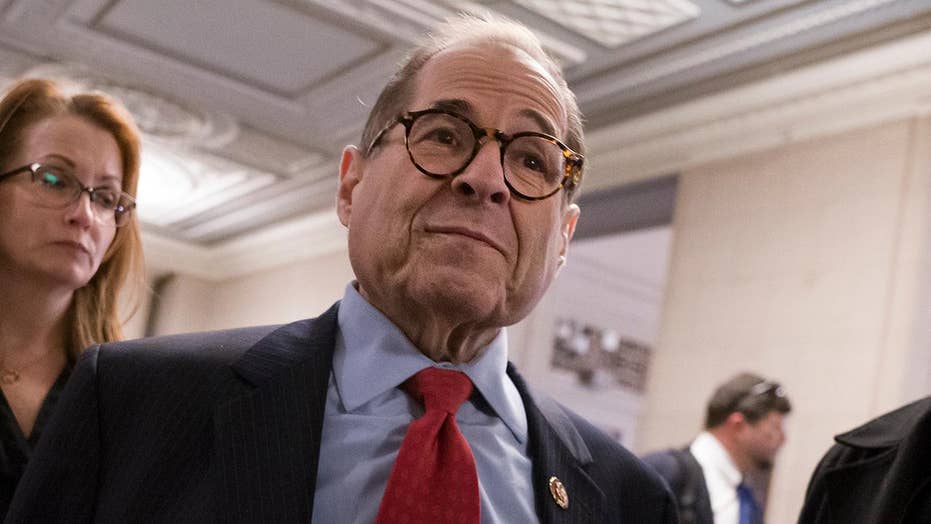 Reaction and analysis from special adviser to the president Tony Sayegh.

The Democrats’ partisan witch hunt against President Trump moves back to the House Judiciary Committee on Wednesday.

Lewandowski made the Trump-deranged Democrats on the committee led by impeachment-crazed Nadler look like foolish political hacks.

GREGG JARRETT: DEM IMPEACHMENT REPORT ON TRUMP IS A POLITICAL ATTACK WITH NO FACTUAL BASIS, NO GOP SUPPORT

The frantic two-year search by Democrats for a crime by President Trump involving collusion with Russia over the 2016 presidential election and obstruction of justice was already dismissed in the final report of Special Counsel Robert Mueller.

Because of Nadler’s failure, Pelosi was forced to hand the fraudulent impeachment effort off to House Intelligence Committee Chairman Adam Schiff, D-Calif., to try to keep the hoax alive.

In fact, Nadler’s committee was such an embarrassment to the Democrats’ taxpayer-funded political smear campaign against President Trump that Pelosi had to take the impeachment inquiry away from the committee that has jurisdiction over impeachment. This rejection of historical precedent was ignored by the biased mainstream media, but was a harbinger of things to come.

Under the infamous reign of Chairman Schiff, the credibility of the Democrats’ impeachment charade went from bad to worse.

When it comes to telling the truth, Schiff must have taken notes from serial liar and former President Bill Clinton – his original political benefactor.

After that, it was on to Schiff’s shady deposition dungeon, where the President was not allowed legal representation. Then when public hearings began, it was Schiff’s unfair and heavy-handed denial of Republican witnesses being allowed to testify before his shameful kangaroo court.

And finally on Tuesday – as if we should have been surprised – Schiff released a horribly weak impeachment report and gave members of his committee only hours to read it before holding a vote on its merits.

If the American people needed more evidence that this entire train wreck of an inquiry is anything but a fraud foisted upon them by power-hungry Democrats who can’t get over the results of the 2016 election, Schiff gave it to them.

The reason for Schiff’s weak case is because it has no factual basis.

At the end of the day, foreign aid approved by Congress was sent to Ukraine. The government of Ukraine did not open an investigation into the highly questionable activities of former Vice President Joe Biden and his son Hunter.

But Adam Schiff has proven time after time that he never lets the facts get in the way of a good story – so now this nauseating sideshow moves back to the House Judiciary Committee.

In order to continue the impeachment farce and try to overcome his massive credibility gap at the same time, Chairman Nadler is calling four constitutional scholars to discuss their views on the parameters for impeachment proceedings as the baseless witch hunt creeps forward.

From the looks of the witnesses, Nadler appears to be going out of his way to cement the Democratic push to impeach as a political undertaking.

Most notably, Karlan made her contribution to Warren’s presidential campaign on July 29, which essentially destroys the impartiality of her testimony.

Another Nadler witness at Wednesday’s hearing is University of North Carolina Law Professor Michael Gerhardt, who has also made political contributions to Obama.

This is absurd. American taxpayers understand the fundamental problem with asking Democratic donors to testify at an impeachment hearing concerning a Republican president. This is far from a serious exercise and is destined to backfire.

To make matters worse, Professor Gerhardt appears to have already made his mind up about impeachment. Gerhardt has attacked the Republican defense of President Trump as “not merely wrong, but dangerous.”

Gerhardt sounded liked a staffer at the Democratic National Committee when he wrote recently about “the nonsense that the President’s defenders have proliferated,” while ignoring the disgraceful conduct of Chairman Schiff.

If the American people needed more evidence that this entire train wreck of an inquiry is anything but a fraud foisted upon them by power-hungry Democrats who can’t get over the results of the 2016 election, Schiff gave it to them.

Bloomberg News recently announced it “will continue our tradition of not investigating Mike (and his family and foundation) and we will extend the same policy to his rivals in the Democratic primaries.”

Adding insult to injury, Bloomberg News also made clear that it will continue to investigate President Trump.

During Wednesday’s hearing, someone should tell Professor Feldman that he is writing for what is essentially a Democratic Super PAC.

In a disingenuous effort to appear fair, Chairman Nadler is allowing one witness for the Republicans – Professor Jonathan Turley from The George Washington University School of Law. But this overture rings hollow and is too little too late.

The American people already know that the fix is in because Nadler himself said “personally, I think the president ought to be impeached” – before any impeachment hearings were held.

The truth is that Wednesday’s hearing is just an orchestrated political move designed to invent more fake news leading up to the release Monday of Justice Department Inspector General Michael Horowitz’s report on alleged Foreign Intelligence Surveillance Act abuse under the Obama administration.

At the end of the day, these four legal scholars can’t do what the Democrats desperately attack; they can’t change the facts of the baseless impeachment case. The facts are clear: President Trump did nothing wrong in his dealings with Ukraine.