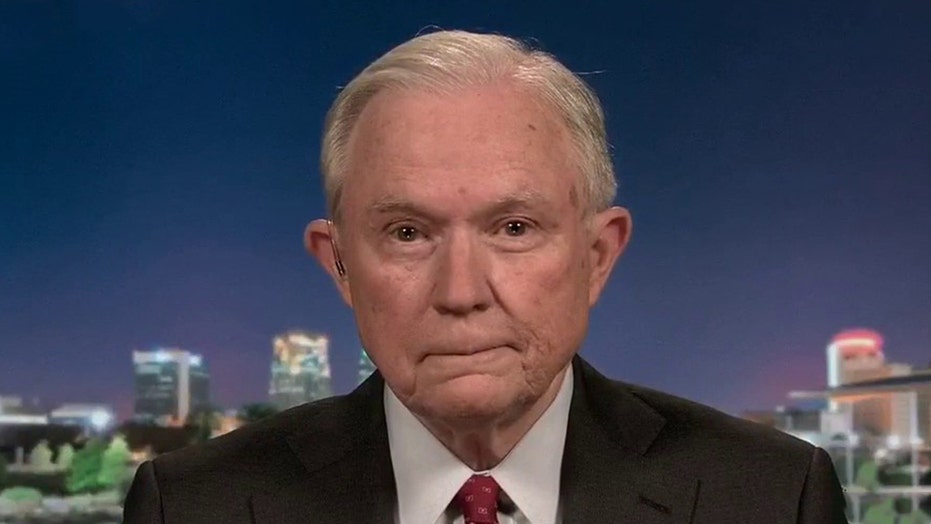 Sessions on Bolton book: We don't have enough discipline, respect in our government

President Trump’s defense team in his Senate impeachment trial rested its case Tuesday after a forceful, convincing and professional presentation of the facts that showed the president committed no crime and did absolutely nothing rising to the level of an impeachable offense.

The American people know this entire pathetic impeachment undertaking is a political attack by radicalized Democrats out to meddle in the 2020 election.

Democrats know they have no answer for President Trump’s success story and the great American comeback we’ve seen unfold over the past three years because of his leadership. So House Democrats impeached him and put him on trial in the Senate to hurt his reelection chances.

CHARLES HURT: MOST AMERICANS HAVE 'TUNED OUT' IMPEACHMENT TRIAL, SHOWING WHY TRUMP WAS ELECTED IN THE FIRST PLACE

Facts are stubborn things and for four months the facts of this partisan impeachment hoax haven’t changed.

First and foremost, in the spirit of transparency, the president did something no other chief executive would have done. He proactively released the transcript of his July 25 routine phone call with the Ukrainian President Volodymyr Zelensky that showed no quid pro quo was discussed.

Second, the Ukrainian government never launched an investigation of former Vice President Joe Biden, his son Hunter, or allegations that Ukraine interfered in our 2016 election. Yet the U.S. government delivered $391million in security assistance to Ukraine nonetheless.

Furthermore, President Zelensky and other senior Ukrainian officials stated flatly that there was no pressure on them from President Trump to start any investigations. And the Ukrainian government didn’t even know there was a hold on the U.S. aid at the time of the short Trump-Zelensky phone call.

Despite the obvious absence of facts, unhinged House Democrats rammed through the two weakest and most politically inspired articles of impeachment in our nation’s history.

Pelosi misled the American people and sold this sham as an urgent matter of national security that couldn’t wait. Then she abruptly changed direction and delayed transmitting the articles of impeachment for a month, in order to give Biden an advantage in his presidential campaign.

The delayed impeachment trial means that four senators running against Biden for the Democratic Party’s presidential nomination – Bernie Sanders of Vermont, Elizabeth Warren of Massachusetts, Amy Klobuchar of Minnesota and Michael Bennet of Colorado – must sit through the trial and can’t be campaigning on the eve of the Iowa caucuses and the New Hampshire primary.

Then Democrats sang in unison that their case was rock-solid and claimed President Trump’s guilt was a foregone conclusion – until they flip-flopped and started asking for more witnesses to rescue their weak case.

These desperate Democratic attempts to reignite the smear campaign against the duly elected president of the United States with more witness testimony are just a continuation of the Democratic abuse of power – using impeachment as a political weapon less than 10 months before the next presidential election.

This must come to an end. The American people should be able to decide on Election Day who their president will be for the next four years.

The selective 11th-hour leak by an anonymous source of a book manuscript written by former National Security Adviser John Bolton should have no bearing on the solemn impeachment proceedings against a president of the United States who received the votes of 63 million American citizens.

The Senate is the world’s greatest deliberative body. Senators should judge the evidence that House Democrats used to bring their indictment and nothing more. Allowing Bolton – or any other additional witnesses – to testify would do nothing but kick-start another three-ring circus like the shameful nomination hearings for now-Supreme Court Justice Brett Kavanaugh last fall.

The Democrats – led by Pelosi, Schiff and Senate Minority Leader Chuck Schumer of New York – are not reasonable people. They’re all suffering from acute cases of Trump Derangement Syndrome.

If the Democrats are given one witness, it will never be enough. They will keep asking for more and more and more. They hate President Trump more than they love our country and will happily drag us all through the mud for as long as it takes to destroy him.

That’s why this coup attempt needs to be put down by the Republican majority in the Senate once and for all.

Republicans hold a 53 to 47 majority in the Senate. It will take a vote of 51 or more senators to compel the testimony of more witnesses, so four Republican senators would have to vote with Schumer and other Democrats to give the Democrats an opening for more partisan mischief.

Democratic impeachment managers know President Trump will be acquitted in the Senate. So their only strategy going forward is to prolong the inevitable by feverishly pleading for the same witness testimony that a month ago they said they didn’t need and wouldn’t go to court to get.

The American people aren’t taking the bait. The Republican caucus in the Senate shouldn’t either.

If Bolton’s sensationalized yet meaningless book somehow convinces 51 senators to seek his testimony, Sen. Lindsey Graham, R-S.C., has indicated that Republicans already have 51 votes rounded up to subpoena former Vice President Biden, his son Hunter, the whistleblower who launched the whole impeachment, and former Democratic National Committee consultant Alexandra Chalupa for their testimony – at a minimum. There are many other possible Republican-called witnesses.

Kavalec is the individual who met with former British spy Christopher Steele at the State Department and then peddled allegations from his unsubstantiated dossier to the FBI on the eve of the 2016 presidential election.

These newly released emails obtained by Citizens United through our ongoing Freedom of Information Act litigation establish a connection between a purveyor of Steele’s fake dossier and the miraculous last-minute testimony of David Holmes about what he may have heard during a phone call between President Trump and U.S. Ambassador to the European Union Gordon Sondland.

So if the Democrats want to call down the thunder, they’ll pay a heavy price for it.

However, it’s my firm belief that there should be no additional witnesses. Giving irrational people like Chuck Schumer an inch is a colossal mistake because he’ll only try to take a mile.

Any Republican senator who may be considering voting with the Democrats to call more witnesses must understand the gravity of the situation. This is their moment to set a precedent that partisan impeachment efforts will not and should not get any undeserved oxygen. That will send the message that the hammer of impeachment should not be abused for political purposes in the future.