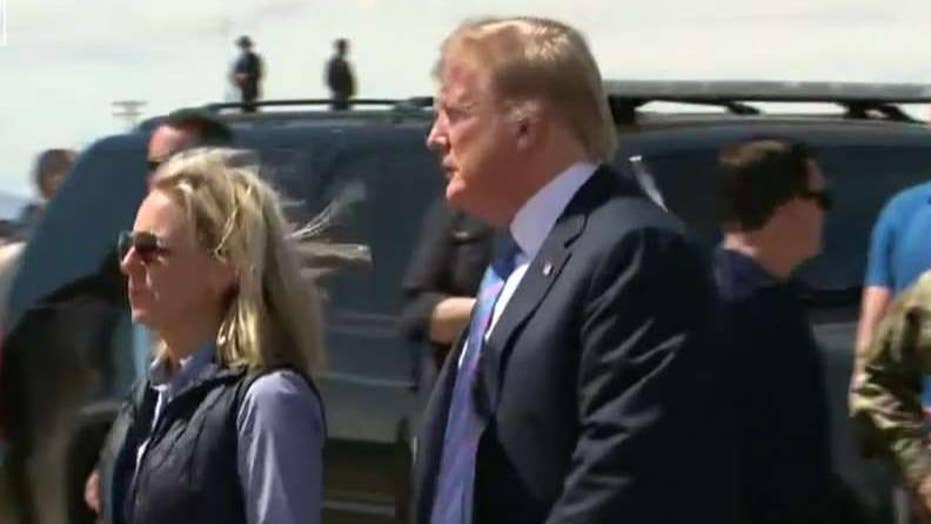 GOP strategist David Avella and Democratic campaign consultant Doug Schoen weigh in on the ongoing crisis at the southern border.

Even the media finally admit there’s a crisis at our southern border and that Mexico is moving to address it. We should all thank President Trump for prompting Mexico to act with his threat to close the border. But most journalists won’t give Trump credit for anything.

Instead, many in the media are blaming the president for the border crisis that he is working to solve.

Heck, many journalists actually criticized Trump for jeopardizing the national guacamole supply when he threatened to close our border with Mexico if that nation didn’t do more to stop the flow of illegal immigrants and drugs into the U.S.

MSNBC anchor Lawrence O’Donnell was one of many to push the talking point as if it were important, telling his audience that if the border closed the “United States would run out of guacamole in three weeks, literally three weeks.”

NBC correspondent Tom Costello expanded those concerns to other parts of the menu. He cautioned about the possible loss of “the blackberries and raspberries in your smoothie, not to mention beer, wine and tequila for your margaritas.”

Those are just the latest types of spin on the illegal immigration crisis that Democratic politicians and many journalists denied earlier even existed.

Yet the president’s tough stand has produced results.

The Washington Post reported progress Friday in a story headlined “Threatened by Trump, exhausted by caravans, Mexico withdraws red carpet.” The article said Mexico is taking action to keep Central American migrants from traveling through the nation and into the U.S.

“Worried by the growing traffic, (Mexican) security officials are considering a plan to effectively bottle up many migrants in the southern part of the country,” the Post reported. “Authorities have also agreed to a Trump administration request to keep migrants in Mexico as they seek U.S. asylum, a process that can take months or years.”

CNN put its own spin on the news, noting that “the apprehension rate (of migrants) in Mexico did see a recent increase over the first two days of April.” Of course, CNN qualified it with the phrase “while CNN could not verify Trump's claims of the last two days.” But the network’s “Cuomo Prime Time” admitted the situation had become a “crisis.”

Suddenly, “crisis” became a word journalists were willing to use – from lefty Mother Jones to the major networks. The New York Times admitted the border was in “crisis,” but fixated on how goods crossing from Mexico had been slowed. The reason was that the Trump administration reassigned 750 border agents to handle “the surge in migrants who have been crossing the border illegally and seeking asylum.”

In other words, sending agents to address the problem was Trump’s fault. Not the fault of those flooding the border.

CNN White House reporter Sarah Westwood dropped the “C” word, as did her rivals at MSNBC. The term even cropped up the screen for MSNBC’s “Up with David Gura,” which called it a “Border Crisis.”

The blame game followed and we all know who gets blamed in America in 2019. An NBC News analysis written by Jonathan Allen laid the responsibility squarely in the “buck stops here” section of D.C.

“Trump's right that there's a border crisis. But he's making it worse,” Allen wrote.  Allen added that Trump was only correct now, not when he first discussed the problem. “President Donald Trump is right: That wasn't the case when he first promised to build a wall in 2015,” he wrote.

The acknowledgments didn’t stop the media push for open borders.

Journalists told viewers and readers that the reason to keep the border open was that Mexico was so horrendously dangerous. Yes, that was the argument. Oddly, some of the media coverage designed to push open borders instead did the opposite. Millennials call that a “self-own.”

“CBS Evening News” tried that Wednesday and painted a sympathetic portrait of immigrants seeking asylum in the U.S.

CBS correspondent Omar Villafranca reported from Tijuana, Mexico, where he warned “there were more than 2,000 murders.” That followed an NBC report from October 2018, when the total had already topped 2,000 with more than two months left to go in the year.

NBC News traveled to El Salvador, which it called, “a country near the breaking point” – with 18 murders a day or more than 6,500 per year in a nation of just 6 million people.

The stories typically dwelled on how America had to help the illegal immigrants and asylum-seekers, not the dangers that the border crisis might mean to Americans. The media seldom care about that aspect of the news.