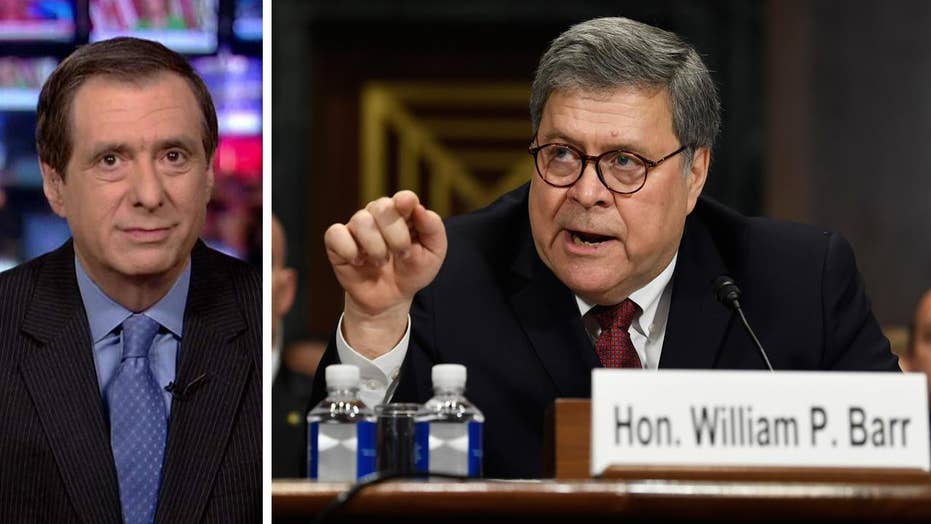 Howard Kurtz: Attorney General defends his disputed summary, but is it now moot?

'MediaBuzz' host Howard Kurtz weighs in on how the leaked Mueller letter led to Attorney General William Barr being grilled in a hyperpartisan Capitol Hill hearing.

Most news organizations assaulted Attorney General William Barr this week like the dead stormed Winterfell in “Game of Thrones.”

Journalists joined Democrats in blasting Barr for his testimony before the Senate Judiciary Committee dealing with his handling of the report by Special Counsel Robert Mueller on Russia’s interference in the 2016 U.S. presidential election.

And then the media mob and Democrats attacked Barr again for refusing to testify before the House Judiciary Committee about the same issue, after Democrats insisted he submit to questions by committee attorneys. Barr said he would answer questions from House members on the committee, following standard procedure, but not their lawyers.

The result was the media continuing their nonstop tantrum over President Trump being elected in 2016.

Most news organizations said the attorney general flunked his Barr exam, and prominently featured calls by Democrats for him to resign or be impeached.

Here are the worst six examples of the no-holds-barred media mugging of the attorney general:

Big fuss over the F-word

Sen. Lindsey Graham, R-S.C., read the quote that launched 1,000 memes and got CNN all excited. He dropped the F-bomb. But, unlike when then-Vice President Joe Biden uttered it, the media couldn’t wait to drop it again and again.

CNN correspondent Jeanne Moos deployed her usual deadpan delivery to hype Graham’s reading of a text referring to the president as a “f------ idiot.” Her report ran the censored clip seven separate times and quoted liberals turning it into a “new ring tone” or just laughing at the president.

The text with the obscenity didn’t come from Barr and had nothing to do with him. But because it was critical of Trump, it became big news.

A “View” from the left wing

Over at ABC’s lefty-dominated talk show “The View,” the hosts had the knives out for Barr. Co-host Sunny Hostin said, as if addressing Barr, that “you seem to be part of the Trump administration and your reputation gets sullied immediately.” She didn’t grasp how her show and others were doing the sullying.

Host Whoopi Goldberg spoke of a coup. "If we can’t trust you all to tell us the truth, then I sort of feel like there’s a coup happening,” she said, also as if she was speaking to Barr. She has convinced herself she’s so right that to disagree with her is an act of political overthrow.

There is no show more devoted to destroying Trump than MSNBC’s “Morning Joe.” Host Joe Scarborough and his wife Mika Brzezinski fill their show with screeds against the president. It’s true Must Resist TV. But even Scarborough questions the idea of impeaching Trump, so he has a new target – Barr.

“Barr is not an attorney general of the United States, he is Donald Trump's defense attorney,” Scarborough said, repeating an oft-stated claim by Trump opponents. “He's his lackey. He's his stooge.”

Scarborough’s answer? “I don’t know why Democrats would not start gathering evidence to impeach this man.”

In 2019, the only ones the media view as unimpeachable are those trying to impeach Trump.

: Leave it to a Washington Post editorial to really fire up the base against Barr. First the paper noted that Barr had “more credibility than many Trump appointees” and “seemed to have little incentive to serve as another Trump sycophant.” Sounds unusually positive.

That was before Barr undermined the media narrative on collusion. Then came spontaneous combustion: “Mr. Barr has lit his reputation on fire, and he just added more fuel during his Wednesday testimony before a Senate panel,” the paper wrote.

The Washington Post – the “Democracy Dies in Darkness” paper – accused Barr of having “misled Congress” and wanted him punished. “Not just Mr. Trump should be held accountable for his actions. So should his attorney general,” the Post declared.

This from the same outlet that told readers in 2016, “Memo to Republicans: Democracies don’t lock up political opponents.” I guess that applies unless the opponents have an “R” after their name.

: MSNBC was thrilled by Sen. Kamala Harris. D-Calif., because she “drew blood” from Barr. Anchor Brian Williams mentioned the word “blood” so often he sounded like a cross between a nurse and a vampire. All that was missing from Williams’ delivery was an attempt at Count Dracula’s accent.

“The headline of the afternoon, which we are going to get to in just a second is, the blood was drawn by Kamala Harris of California, a former prosecutor,” Williams argued. That was one of three mentions just in one segment, as Williams’ renovated career continues to rise by pushing standard lefty talking points.

President Theodore Roosevelt used to say his policy was to “speak softly and carry a big stick.” For liberals, one of the biggest clubs is entertainment. TV entertainment shows are filled with more liberals than an anti-Trump protest.

So naturally, Colbert went all-in with his attack on Barr, calling him a “political call girl.” And Colbert said Barr’s four-page letter to Congress summarizing conclusions of the report by Special Counsel Robert Mueller was “a steaming pile of snit.”

“I’d say it’d make me want to wring his neck but I would need like five more hands,” Colbert told the audience.

Remember, violence is funny when liberals joke about it and when the target is someone who dares disagree with the left.