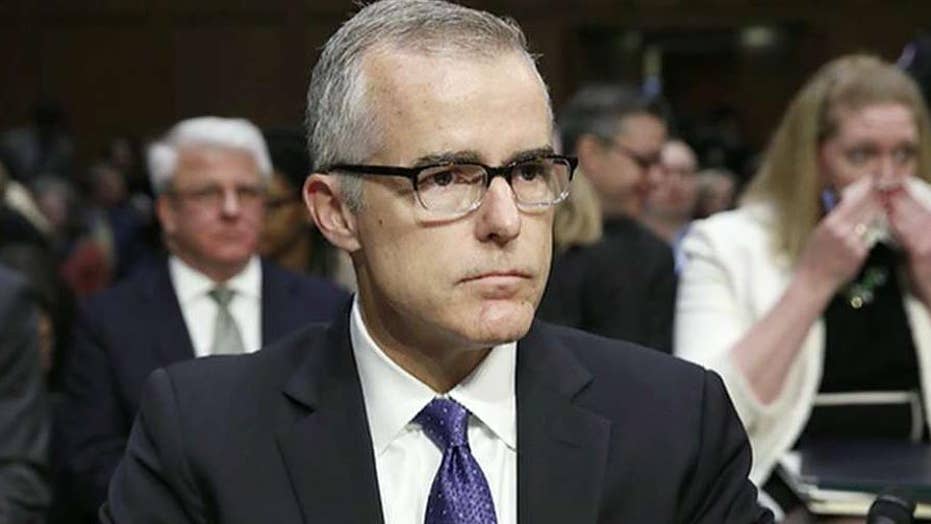 McCabe says he briefed Congress on Trump probe with no objections

Did you notice how, during the Andrew McCabe interview with "60 Minutes," the former FBI acting director kept talking about “articulable facts?”

Like ex-CIA boss John Brennan and disgraced former FBI Director James Comey, McCabe was coining his own phrase to explain why the intelligence community started spying the Trump team. But the justification for mounting a probe should not lie in weasel words. It belongs in something known in law enforcement circles as “Paragraph One.”

Paragraph One in federal investigations lays out precisely why the investigation began and how. You can’t skip over it with fanciful phrases or empty verbiage. Yet, in the case of the counter-intelligence probe that targeted Team Trump, it has been two years and we are still waiting for someone to articulate a clear reason why the program began.

McCabe told Scott Pelley the FBI had a bunch of "articulable facts," but he didn’t bother to articulate them. Earlier, Comey told Fox News Channel’s Bret Baier the investigation was justified by a "mosaic of facts." The impetus was described by Brennan in still another interview as the "corpus of intelligence."

Is anybody ever going to describe what this is? Put yourself in Trump's shoes. He is being investigated as a potential traitor to the United States for colluding with a foreign power and no one has yet described why they were investigating the Trump team during the campaign.

Here’s why they can’t say what the “articulable facts,” “mosaic,” or “corpus” really are. Because it was the dossier, commissioned and paid for by the Hillary Clinton campaign and later thoroughly discredited that prompted the never-ending probe. It was compiled by Trump-hating ex-British spy Christopher Steele, on behalf of Fusion GPS, which was hired by a law firm which in turn contracted with Clinton to get dirt – real or fake – on Trump. The dossier was the “predicate crime,” but now that it has been debunked, it is pretty hard to acknowledge what a house of cards this whole investigation has been.

McCabe has already admitted the Justice Department would never have gotten a FISA warrant to investigate Trump, which gave them the power to monitor him, without the dossier. But you won’t hear him, Brennan or Comey say that anymore.

When the truth is no longer “articulable,” you have to get creative.

CLICK HERE TO HEAR MORE FROM THE DAN BONGINO SHOW