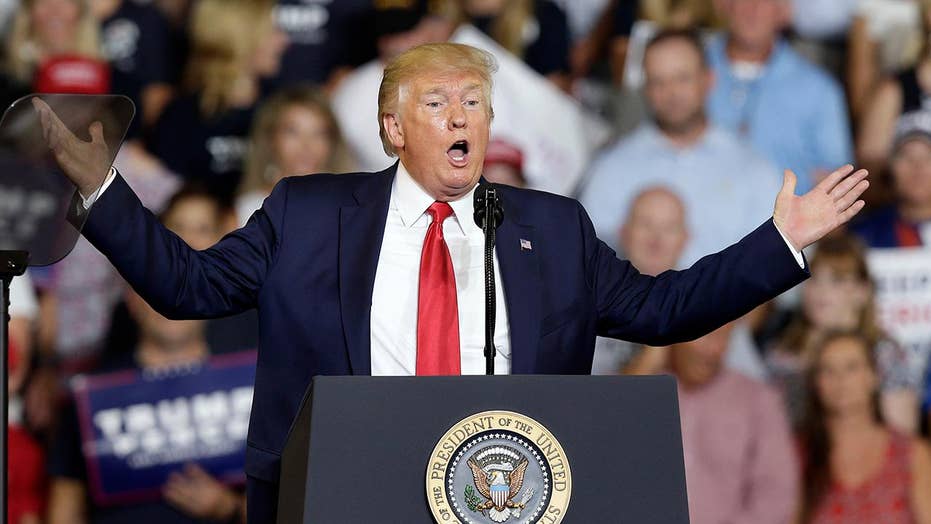 Bret Baier weighs in on President Trump's controversial comments on the 'squad.'

The U.S. economy is roaring. More voters rate the economy positively today than have since 2001.

According to spending data from June, Americans spent more at restaurants and retail locations than expected, while U.S. manufacturing output continues to rise.

As Federal Reserve Vice Chair Richard Clarida recently put it, "The U.S. economy is in a good, good place. We have a solid growth rate. We have a strong labor market. Inflation is stable."

He’s right. Economic growth has been north of 3 percent during much of Trump’s presidency.

Employers are creating jobs, employees are happy with raises, bonuses, and newfound job security, and a wave of consumer confidence has swept through the U.S. economy since the 2016 election. Homeownership is on the rise, as many Americans under 35 buy into real estate for the first time.

What they’re not buying is the left’s daily outrage or the nothing-burger that was Robert Mueller’s recent testimony. That’s why the strength of the Trump economy will be the single most important factor during the 2020 election.

President Trump will be reelected because of it.

As the left panders to identity politics, Trump delivers economic prosperity for all Americans. Labor force participation has risen since his election, while unemployment is at historic lows. African-American and Hispanic unemployment rates have fallen to their lowest points in U.S. history.

That doesn’t bode well for Democrats, who are increasingly desperate to climb a mountain that becomes more unassailable with each new jobs report and poll of consumer confidence. They won’t hit that summit — not in time to derail President Trump’s second term.

It doesn’t help that Democrats are shooting themselves in the foot en route to the mountaintop. For one, the overflowing clown car of this Democratic primary can’t handle quite so many candidates, and the party’s electorate is splintering. Yet Democrats know they desperately need to reunite to have any hope of defeating President Trump — and his booming economy.

Frontrunner Joe Biden is driving the clown car, but only with 25 percent support among Democratic primary voters. The rest are split between the socialist brigade led by Sen. Bernie Sanders, I-Vt., faux-intellectuals like Sen. Elizabeth Warren, D-Mass., Sen. Kamala Harris, D-Calif., and South Bend Mayor Pete Buttigieg, whose own city is rejecting him.

The rest of the clown car will tag along, picking up delegates here and there to trade for power and position. But, because the Democrats made their primaries “proportional,” and not winner-take-all, no candidate getting on the board is going away.

That likely means a brokered convention—something we haven’t seen in decades. Will the #Resistance fighters nominate one of the two old white men leading the race? Will they push one of them aside for Harris — a box-checking identity politics candidate — to join the ticket? Or somehow push both aside?

Democrats are equally split in their 2020 priorities. Is it socialism? Is it expanding the #MeToo movement? Is it a tax on white people or reparations?

As the left panders to identity politics, Trump delivers economic prosperity for all Americans. Labor force participation has risen since his election, while unemployment is at historic lows. African-American and Hispanic unemployment rates have fallen to their lowest points in U.S. history.

Martin Luther King, Jr. once said, "I have a dream that my four little children will one day live in a nation where they will not be judged by the color of their skin, but by the content of their character."

That is Trump’s America — a rising tide lifting all boats.

While the Democratic clown car discredits itself, the president is ushering in a new era of American prosperity — prosperity for all.

And he’s going to be reelected because of it.

Dan Backer is a veteran campaign counsel, having served more than 100 candidates, PACs, and political organizations, including the Committee to Defend the President. He is founding attorney of political.law, a campaign finance and political law firm in Alexandria, Virginia.