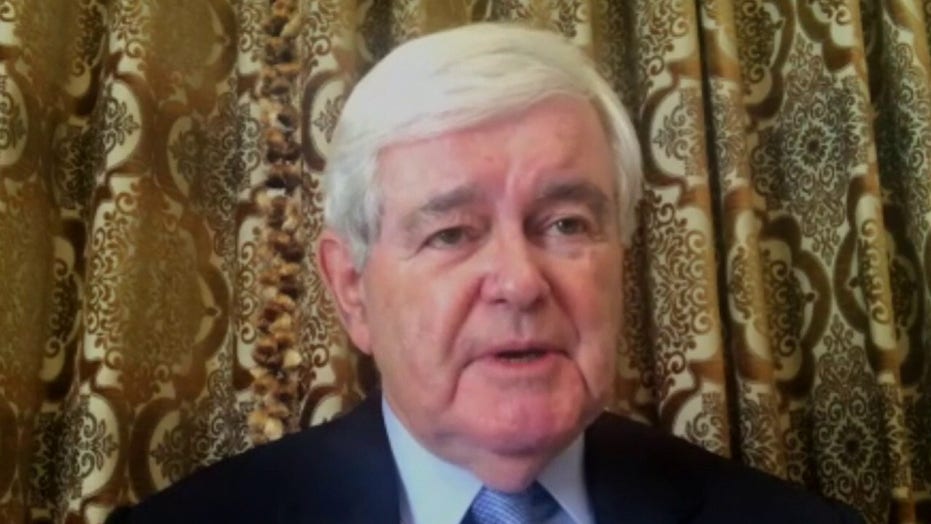 President Trump tweets that the cure cannot be worse than the problem itself; former House speaker and Fox News contributor Newt Gingrich weighs in.

Watching the Chinese Communist dictatorship mismanage the initial coronavirus epidemic, cover it up and then lie about it has been infuriating. But it is also a good lesson in how dangerous and how profoundly dishonest the dictatorship is.

China’s guilt at having allowed a local epidemic to turn into a worldwide pandemic is even more infuriating when the Chinese Foreign Ministry publicly alleges that the coronavirus came from America. Both President Trump and Secretary of State Mike Pompeo have correctly pushed back hard against the Communist dictatorship’s lies.

The simple fact is that Communist-ruled China has a long record as a source of potential epidemics and pandemics.

In 2005 Laurie Garrett warned in Foreign Affairs: “Scientists have long forecast the appearance of an influenza virus capable of infecting 40 percent of the world's human population and killing unimaginable numbers. Recently, a new strain, H5N1 avian influenza, has shown all the earmarks of becoming that disease. Until now, it has largely been confined to certain bird species, but that may be changing.”

Then in 2007 four scientists at the University of Hong Kong asserted: “Coronaviruses are well known to undergo genetic recombination, which may lead to new genotypes and outbreaks. The presence of a large reservoir of SARS-CoV-like viruses in horseshoe bats, together with the culture of eating exotic mammals in southern China, is a time bomb. The possibility of the reemergence of SARS and other novel viruses from animals or laboratories and therefore the need for preparedness should not be ignored.”

Despite these clear warnings, the Chinese Communist government did nothing to stop the sale of wild animals in wet markets or to stay adequately alert for a potential virus.

In fact, the dictatorship took the opposite position in the early days of the coronavirus outbreak. It wanted to hide any potential disease outbreak and hoped it would go away. Consider the tragic chronology of the coronavirus pandemic.

The first confirmed case was noticed on Dec. 8, 2019, according to the Wuhan government. By Dec. 16 a patient who worked at a wildlife market that was linked to the outbreak was admitted to the hospital.

By Dec. 21 there were about three dozen people showing similar symptoms (which were later found to be confirmed or suspected coronavirus cases). By Christmas, four days later, the medical staff at two separate hospitals were quarantined when they came down with an unidentified viral pneumonia.

Apparently, by the day after Christmas a laboratory had identified samples from Wuhan as a new SARS-like virus. The next day Wuhan public health officials and hospital leaders were told that there was a new coronavirus causing the illness.

This was the moment.

If the dictatorship had decided then and there to call in the experts and focus on containing the new threat, the entire world would have been spared a year of pain, thousands of dead, massive costs, and economic collapse.

When Dr. Ai Fen, the head of the emergency department at Wuhan Central Hospital, shared a picture of lab test results and a video of lung scans on Dec. 30, she was harshly reprimanded.

When Dr. Li Wenliang disseminated information about the virus through posts on WeChat in a group with more than 100 of his classmates from medical school that said there were “7 SARS like cases confirmed from the Hua’nan Seafood Market,” the government reaction was to censor the spread of this information and take it out of social media.

On the last day of the year, 23 days after the apparent first confirmed patient started showing symptoms, the Wuhan branch of the National Health Commission said: “The investigation so far has not found any obvious human-to-human transmission or infection of medical staff.” Officials said “the disease is preventable and controllable.”

The Times of London reported that by late December laboratories in China discovered an unknown highly infectious virus, but “were ordered to stop tests, destroy samples, and suppress the news.”

The Chinese dictatorship’s efforts to suppress and deny the reality of the coronavirus came at tremendous human cost to the Chinese people and to the rest of the world.

On the first day of 2020, in an effort to keep others quiet and stop information from spreading, eight whistleblowers, including Dr. Li, were issued summons by the Wuhan Public Security Bureau and brought in for questioning for posting information about the virus on WeChat.

The police detention was widely reported in the media. Medical professionals all got the message to stay quiet about the disease.

Ironically (and tragically) by Jan. 2 the Wuhan Institute of Virology identified and mapped the genome of a new coronavirus – but it was kept secret.

By Jan. 6, the rumors were strong enough that U.S. Secretary of Health and Human Services Alex Azar and Centers for Disease Control and Prevention Director Dr. Robert Redfield offered to send a team to China. The dictatorship didn’t accept the offer.

However, it is clear that Xi knew about the virus by Jan. 7 – about the time the Americans were offering to help.

By Jan. 9 Chinese government officials were admitting they had a virus and announced they had mapped the genetic sequence but did not release the data until Jan. 12. They did not reveal critical information about who was sick, when they got sick, and critical demographic information about those infected. As a result, evaluation of the outbreak remained inadequate.

Jan. 12 was also the day Dr. Li, who had been reprimanded for reporting on the virus, was hospitalized after contracting coronavirus.

On Jan. 13 the first case was reported outside of China in Thailand.

On Jan. 14 the World Health Organization continued its recent behavior of protecting dictatorships. It announced that Chinese authorities have witnessed “no clear evidence of human-to-human transmission of the novel coronavirus.”

The World Health Organization continued its recent pattern of lying for dictators when an official said during a press conference that day that there could also be “limited human-to-human transmission, potentially among families.”

On Jan. 15 the first confirmed infected American left Wuhan while Li Qun (the head of the Chinese CDC emergency center) said on state television “after careful screening and prudent judgment, we have reached the latest understanding that the risk of human-to-human transmission is low.”

Finally, on Jan. 20 China confirmed human-to-human transmission and the first case was announced in South Korea.

The Chinese dictatorship’s efforts to suppress and deny the reality of the coronavirus came at tremendous human cost to the Chinese people and to the rest of the world.

An analysis by the University of Southampton estimated that 95 percent of the infections would have been avoided if the aggressive intervention had only occurred three weeks earlier.

The amount of the damage the Chinese dictatorship has done to its own people and by letting the epidemic get out of control and turn into a pandemic – and the amount of damage it has done to people around the world – is stunning.

One courageous (and maybe foolish) Chinese businessman, Ren Zhiqiang, wrote a direct critique of the Communist dictatorship, saying: “Those who live in a democratic country with freedom of speech perhaps don’t know the pain of the lack of a free press and free expression. But Chinese people know that this epidemic and all the unnecessary suffering it brought came directly from a system that strictly prohibits the freedom of press and speech.”

The New York Times reported on March 14 that Ren Zhiqiang is missing.

Faced with growing worldwide condemnation for mismanaging and spreading the coronavirus, the dictatorship decided to create a propaganda campaign blaming America.

On March 12 Hua Chunying, who is the head of the Chinese Foreign Ministry’s Department of Information, tweeted that it was “absolutely wrong and inappropriate to call this the Chinese coronavirus.”

Then the Chinese went a step further. Chinese Foreign Ministry spokesman Zhao Lijian also tweeted on March 12: “It might be US army who brought the epidemic to Wuhan. Be transparent! Make public your data! US owe us an explanation!”

As a final note to this whole dishonest performance, Dr. Tedros Adhanom, the Chinese- supported director-general of the World Health Organization, praised the Chinese handling of the virus.

Adhanom said: “We appreciate the seriousness with which China is taking this outbreak, especially the commitment from top leadership, and the transparency they have demonstrated, including sharing data and genetic sequence of the virus. WHO is working closely with the government on measures to understand the virus and limit transmission. WHO will keep working side-by-side with China and all other countries to protect health and keep people safe.”

Adhanom won the job with Chinese backing, even though he was accused of covering up three different cholera epidemics as health minister in Ethiopia. He is a reminder of the unending Chinese dictatorship’s corruption and dishonesty.