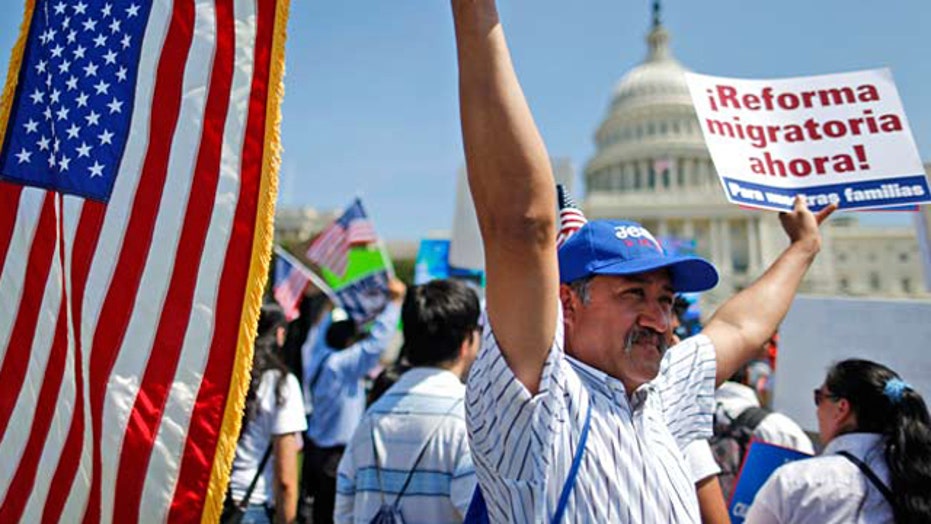 Is amnesty a viable option to achieve immigration reform?

The past 10 days have been a roller coaster for evangelical Christians and other conservative Americans who are convinced that our nation’s immigration laws are woefully in need of reform.

The time is now.

The time is now.

The principles include a commitment to secure borders and an approach to those immigrants who have violated the law that reconciles a healthy respect for the rule of law and a compassionate approach to people made in God’s image, avoiding the irrational extremes of either amnesty or mass deportation.

Just a week later, though, media reports have suggested that some of those who have in the past been strong proponents of reform consistent with these standards are now arguing—primarily for political, not principled reasons— that House Leadership should under no circumstance seek to tackle immigration reform in 2014.

We’ve both spent enough time in Washington, D.C., to know that doublespeak is part of political parlance. Many of the local pastors from all corners of the country who have come to the Capitol to advocate for immigration reform in the past year, though, have been disillusioned as they hear elected officials say one thing about the need for reform in a private meeting only to read something rather different quoted in the newspaper.

Getting to “Yes” on immigration reform this year is urgent for many reasons. We need a system that restores the rule of law, that secures our borders, that jumpstarts economic growth, and that keeps families—including many within our local churches—from being divided.

As social conservatives keenly aware of the importance that the president—and his or her appointees to the Supreme Court—can play in determining key questions for proponents of religious liberty, traditional marriage, and the pro-life cause, there’s another critical reason that House Republicans must get to “Yes” this year. As many within the GOP have acknowledged, it is nearly impossible to win the Electoral College unless a Republican candidate significantly outperforms Governor Romney’s 27 percent of the Latino vote.

While immigration is not the only concern of Latino voters, it is, as columnist Michael Gerson recently noted, the “threshold” to winning Latino votes. If we are to have another pro-life president, the socially conservative party must address immigration. As Senator John Cornyn, who hails from a red state where 30 percent of eligible voters are Latino, recently observed, “We can't win in 2016 without resolving it.”

If tackling immigration reform is deferred to 2015, though, the presidential primary jockeying will begin, drawing out the shrillest anti-immigration voices from the fringes of the GOP and likely pushing the dialogue further and further from the reasonable reforms that most Republican voters and most Republican elected officials believe are ultimately the best for our country. Past 2014, the window of opportunity to finally pass reform begins to close.

If we are to have a Republican president elected in 2016, we need immigration reform—and we need it this year.

Ultimately, though, the reasons our leaders in the House of Representatives should get to “Yes” on immigration reform are not political, they are moral. “The time is always right,” Dr. Martin Luther King Jr. once said, “to do what is right.” We take our cues from Scripture, which makes clear both that we are to welcome and extend hospitality to immigrants and that we ought to respect and honor the law. Our current immigration quagmire fails on both counts.

Evangelical Christians, who make up nearly half of Republican primary voters, are looking for candidates who share their biblical values, including biblically informed commitments to caring for immigrants and restoring the rule of law. Poll after poll finds that a majority of white evangelicals (and an even larger majority of Hispanic evangelicals) support immigration reforms consistent with the Standards that House Republican Leaders laid out last week.

Across the country, we are praying that Congress will have the courage to do what is right: to get to “Yes” on immigration this year. Right now, House Republicans have a window to develop immigration reform that honors and promotes conservative values: a more secure border, a stronger economy, respect for the rule of law, and an earned legalization program that emphasizes accountability.

But that opportunity will not last forever. The time is now.