Radical left-wing California Gov. Gavin Newsom won Tuesday’s recall election, but the people of California lost and will continue losing due to his failed leadership.

The results showing Newsom surviving the recall by a margin of 64% to 36% – with many votes still left to be counted – gives us a snapshot of the dire situation unfolding in the state once described as "The Promised Land."

California is a deep blue state that hasn’t elected a Republican to statewide office since 2006. In fact, it’s hard to remember a statewide election in California when a Republican had a legitimate chance of winning.

But the wide margin of victory for Newsom shows that more Californians are growing resigned to the fact that they’re stuck with one-party Democrat rule, more government control of their lives, failed socialist policies, and they just need to get used to it. These results reek of a growing pessimism and despair that is dangerous to a free America.

However, the outcome of this election is hardly a surprise.  It’s just evidence of an entrenched Democrat political machine with a lopsided voter registration advantage conducting business as usual.

For example, in 2018 Newsom was elected governor by a 62% to 38% margin.  Newsom received almost 4 million more votes than the Republican challenger out of over 12 million votes cast. In the 2020 presidential election, Californians once again voted in favor of big government socialism by delivering their 55 electoral votes to Democrat Joe Biden by a margin of 64% to 34% over incumbent President Donald Trump.

All-powerful Democrat Party leaders in California have become experts at preserving the failing status quo they’ve created, to the detriment of hardworking citizens.

In fact, California is the prototype for what happens when progressivism under one-party rule is allowed to run amok. It’s the land of high taxes, high gas prices and high crime, sanctuary cities, ballot harvesting, cradle-to-grave welfare handouts, rampant drug abuse and homelessness, COVID-19 lockdowns, restrictions, and mandates. California has quite simply become a laboratory for socialism right here in America.

In voting for more of the same in the recall election, two-thirds of those turning out at the polls this week ensured that the Golden State will continue its charge to rock bottom.

Embattled Gov. Newsom campaigned on the theme that a vote to recall him would be a vote for turning California into a conservative, well-run state like Texas. This was risky messaging for Newsom, as Californians have been flocking to Texas in recent years due to California’s downward spiral.

But sadly, pro-abortion politics and fear tactics employed by the national Democrat machine prevailed once again.  Not even movie star Republican Arnold Schwarzenegger – who was elected governor in 2003 when Democrat Gray Davis was recalled – could have prevailed in the too far gone California of today. 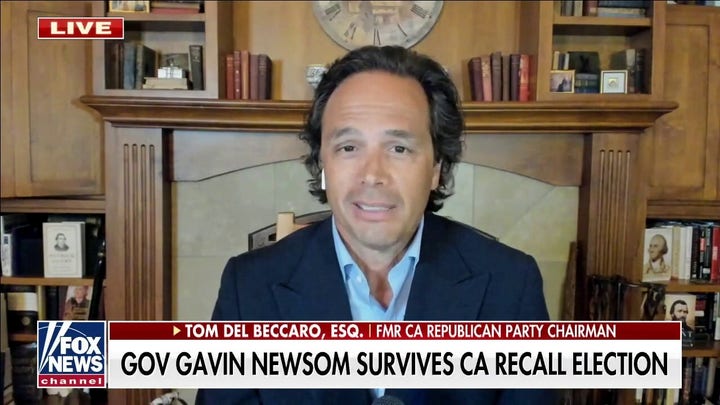 Even though the mainstream media worked hard to suppress Republican turnout with questionable polls and biased reporting leading up to the election, both President Joe Biden and Vice President Kamala Harris still took campaign trips to boost Newsom at the 11th hour.

Traveling to California on the heels of his controversial announcement imposing unconstitutional COVID-19 vaccine mandates on 100 million Americans, Biden doubled down on his anti-liberty agenda by campaigning for Newsom. After all, the entire reason the Newsom recall took off in the first place was over his heavy-handed pandemic-related lockdowns and tone-deaf hypocrisy. But alarmingly, with their vote to keep Newsom calling the shots in Sacramento, a big majority of Californians emphatically shouted, "More please."

In retrospect, the fact that Biden and Harris decided to make time-consuming trips across the country even though the race wasn’t close is a terrible look for the White House. With Americans stranded in Afghanistan - in addition to the border crisis, crime crisis, inflation crisis, and the coronavirus pandemic, the president and vice president opted to set official business aside to take separate unnecessary political trips for an election that was already privately a foregone conclusion. You’ll never hear a peep from the biased liberal media about this, but if it were President Trump, they would have turned it into a five-alarm fire.

The 2021 California recall election was a fantastic opportunity for California to stop digging the socialist hole they’re stuck in. A Republican governor would have ended the lockdowns, opened schools, supported police, enforced the law, cut taxes and fees, and made California a better place to live – but it wasn’t meant to be.  However, the rest of America can use California as a glowing example of why socialism is and will always be a failure.