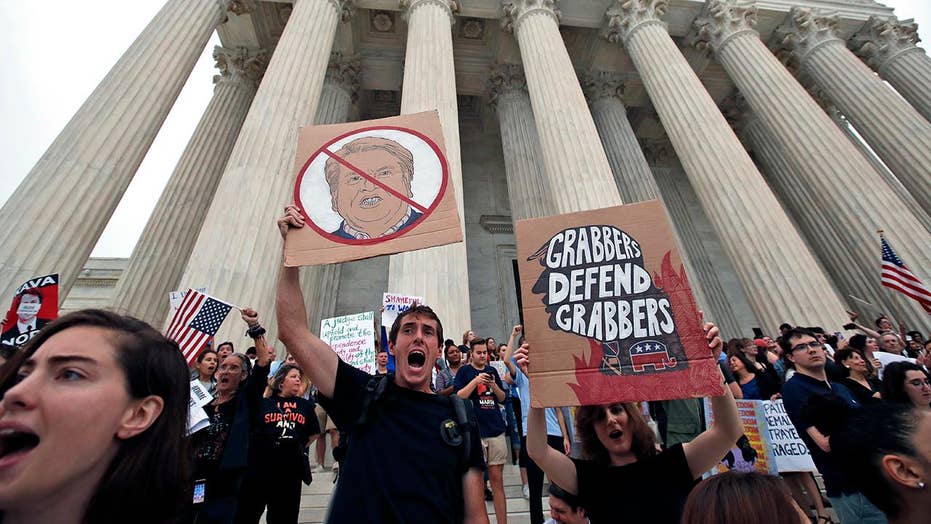 RNC Chairwoman Ronna McDaniel on whether the Kavanaugh confirmation will energize the Republican base.

As the Senate elevated Brett Kavanaugh to the Supreme Court on Saturday, the sorrowful faces of Democratic Senators on the chamber floor showed publicly what Democratic insiders are now whispering privately.

The party is gravely wounded. They are bleeding out.

Surveys show that the once-formidable Democratic lead in generic polls has collapsed. The Senate seats in North Dakota, Texas, and Tennessee are all but lost. Prospects of a Democratic House have fallen too.

Progressives have no one to blame but themselves, of course. For the past two months, the Democratic machinery has launched blistering attacks on Kavanaugh that have utterly backfired.

The media led the way with astonishing speed and inaccuracy, with USA Today going so far as to suggest Kavanaugh was a pedophile. Meanwhile, activist groups organized pop-up protests in elevators and hallways, with cult-like followers chanting back to their leaders how they’d target their next victim. And, of course, hundreds of Democratic officials in the Senate and House pumped out talking points that defied both logic and decency.

The most embarrassing theatrics were those orchestrated by Judiciary Chairwoman Sen. Dianne Feinstein of California. Her pièce de résistance was planting a faded actress-come-agitator behind Justice Kavanaugh in a transparent attempt to curry favor with the #MeToo movement. Yet the obviousness of Sen. Feinstein’s pandering made the actress – Ms. Alyssa Milano – look to be nothing more than a prop in a stage play.

Indeed, observers were left to wonder if Milano’s 1980s co-star Tony Danza might make a surprise appearance too. Because why not? These are the silly things that happen in the theater.

Nevertheless, Democratic forces persisted, but the tactics suddenly changed. No longer was the debate centered on Kavanaugh’s guilt or innocence. It was to be a battle about The Patriarchy. Violence against women. White privilege.

Not to be outdone, Sen. Corey Booker of New Jersey had his own role to play. He proudly announced that he had taken the improper step of leaking sensitive Congressional documents. Sorry to say, these secrets were already public.

Still, he was quite proud of himself, saying, “This is about the closest I’ll probably ever have in my life to an ‘I am Spartacus’ moment.”

When America finally heard testimony regarding Professor Ford’s serious allegations, the outcome was clear. Not one of the people she identified as attendees of the infamous 1982 party could corroborate that a sexual assault occurred or a party ever happened.

Most damning was the repeated statements of Ms. Leland Keyser, a lifelong friend of Ford. She twice told the FBI that she had zero knowledge of the party and had, in fact, never met Mr. Kavanaugh.

No longer was the debate centered on Kavanaugh’s guilt or innocence Instead, he would serve as a suitable proxy for a new fight. It was to be a battle about The Patriarchy. Violence against women. White privilege.

Democrats thus insisted that a vote for Kavanaugh was a vote against women, against victims of sexual assault, and against an equal playing field for America’s minorities.

But on Saturday, the Senate had heard quite enough. It was time to confirm Kavanaugh.

Fundamentally, there is no Plan B beyond the Plan A culture war that they believed would work, especially among the base and swing voters.

If the last few weeks are any indication, the American people have seen enough. No one could blame them if they simply choose to walk away.

Alas. Polling data shows that while their tactics certainly riled up progressives, it equally angered conservatives. And, as ever, independents remain a wild card, gently breaking for the GOP as of today but tentative and dispassionate in their support.

Yet with no new message and no credible messengers, Democrats are stuck in finding fresh ways to reach these voters, many of whom are white and conservative leaning.

“It turn(ed) into a circus atmosphere,” Sen. Peters said of Avenatti’s efforts, “and certainly that’s not where we should be.”

But Peters’ admission rings hollow. Reasonable observers had long argued for a proper investigation against Kavanaugh, with any accuser and the judge both given privacy, due process, and presumption of innocence before public debate.

It’s much too late for that now, though. The time for Democratic bravery has passed.

And so the fight continues, with less than a month to go until America heads to the polls. That’s an eternity in politics, of course. There could be another October Surprise that might give Democrats a shot at taking back the House and Senate. It would be a chance for national redemption after a disastrous Kavanaugh performance.

But if the last few weeks are any indication, the American people have seen enough. No one could blame them if they simply choose to walk away.