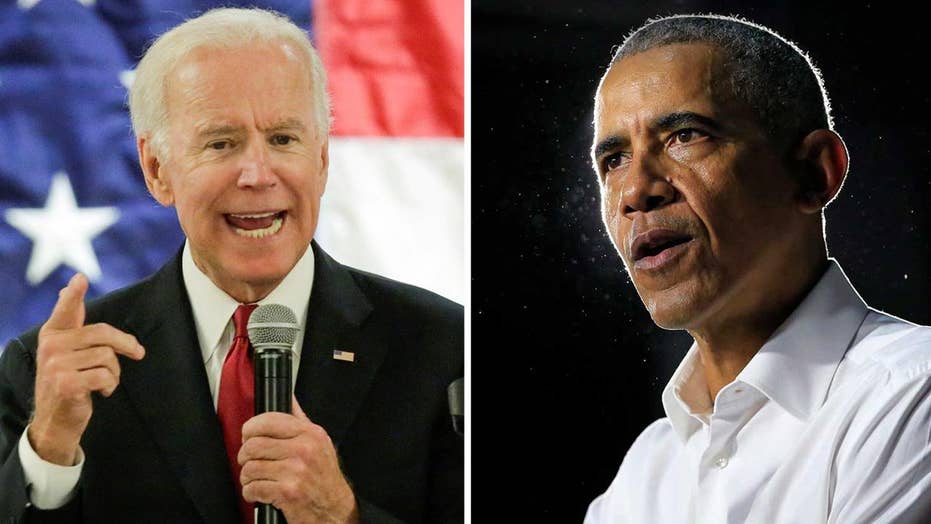 At an event for the Obama Foundation in Hawaii, former President Obama said the Democratic Party faces a 'deficit of leadership'; reaction from Bill McGurn, columnist for the Wall Street Journal and former chief speechwriter for President George W. Bush.

If you need even more evidence the Democratic Party has become so disconnected from everyday Americans that even its base is jumping ship, look no further than revelations made by former Vice President Joe Biden’s brother last week.

In an interview with The Palm Beach Post, Frank Biden disclosed that some members of the Biden family chose to cast their vote for President Trump over Hillary Clinton in 2016.

No, that’s not a typo. Some relatives of the former Democratic vice president – and possible 2020 Democratic presidential contender – voted for Republican Donald J. Trump.

Joe Biden represented Delaware in the Senate but is originally from Pennsylvania. According to his brother, the former vice president’s Pennsylvania family “felt slighted” by Hillary Clinton.

They weren’t alone. The election of Donald Trump marked the first time Pennsylvania voted Republican in a presidential race since 1988, when George H.W. Bush won the state to defeat then-Massachusetts Gov. Michael Dukakis.

Having grown up in Pennsylvania I can vouch for how its people are honest, hardworking, salt-of-the-earth straight shooters.

They don’t take kindly to arrogant politicians who think they’re better than them and singlehandedly insult and stereotype blocs of voters. Much like Hillary Clinton did in 2016 when she called Trump supporters a “basketful of Deplorables.”

It’s been over two years since the 2016 election and the Democratic Party still won’t read the memo. It’s as if candidates and potential candidates are competing with each other to see who can be the most extreme.

That arrogance doesn’t play well in Pennsylvania, and it doesn’t work in most flyover states – like Michigan and Wisconsin, which Clinton did in fact fly right over in her 2016 campaign. The good people of Michigan and Wisconsin returned the favor on Election Day when they ignored her and threw their historically blue states to Trump.

The miscalculation of 2016 is one that’s yet to be corrected by the Democrats. They never bothered to answer the question posed by Hillary Clinton’s post-election book: “What Happened?”

Instead, Democrats have chartered a course and it’s full speed ahead, rebranding themselves as the party of far-left radicalism.

Frank Biden is not alone when he says: “My personal politics are not as far left as many of the candidates seem to be.”

All that doesn’t matter. It appears Democrats are digging in their heels and choosing to ignore what’s not working for them where real people live and vote.

Some Democrats are taking their radical agenda to the extreme and proposing things like a 70 percent income tax rate on the wealthiest Americans. Does anyone really believe our historically greedy government will stop there? Eventually that 70 percent rate will trickle down to the middle class.

Many Democrats are also pushing proposals such as single-payer health care. Not only would this handicap Americans with enormous tax increases, but it would put the quality of our health care in the hands of our government.

Countries with socialized medicine are infamous for their rationing of health care and interminable waiting lists – sometimes for the simplest of tests and procedures.

In a crowded field of potential 2020 presidential hopefuls, not a single one emerged to denounce the proposed astronomical 70 percent tax rate, nor did a single leader of the Democratic Party – including former President Obama. Does that sound out of the mainstream to anyone else?

Last week Obama, who’s made it his mission to raise up a new generation of leaders, called for “new blood” in politics.

Look at the radical Democrats in the freshman class in the House. This is an example of the “new blood” he’s talking about. This is the future of the Democratic Party.

So far Obama has met with several potential 2020 presidential candidates – most notably with defeated U.S. Senate candidate from Texas Beto O’Rourke, who Obama reportedly considers to be most like himself.

O’Rourke is an extreme liberal who’s quickly becoming a media darling. If all goes well when Oprah interviews him next month the media will likely crown him their candidate and roll out the red carpet for him from now until 2020.

It’s been over two years since the 2016 election and the Democratic Party still won’t read the memo. It’s as if candidates and potential candidates are competing with each other to see who can be the most extreme.

People in Middle America like Joe Biden’s family in Pennsylvania didn’t buy what the Democrats were selling in 2016, and they certainly don’t subscribe to this new brand of radical extremism.

In spite of multiple signs and warnings, for better or worse, this is the future of the Democratic Party. Leading Democrats are going in one direction, but they haven’t stopped to notice the rest of the country isn’t following.

In 2020, the Democrats shouldn’t be surprised if once again the Deplorables in flyover country pick up their baskets and walk the other way.

Lauren DeBellis Appell is a writer based in Fairfax, Virginia, writes frequently for FoxNews.com. Follow her on Twitter @LDAppell.
ADVERTISEMENT