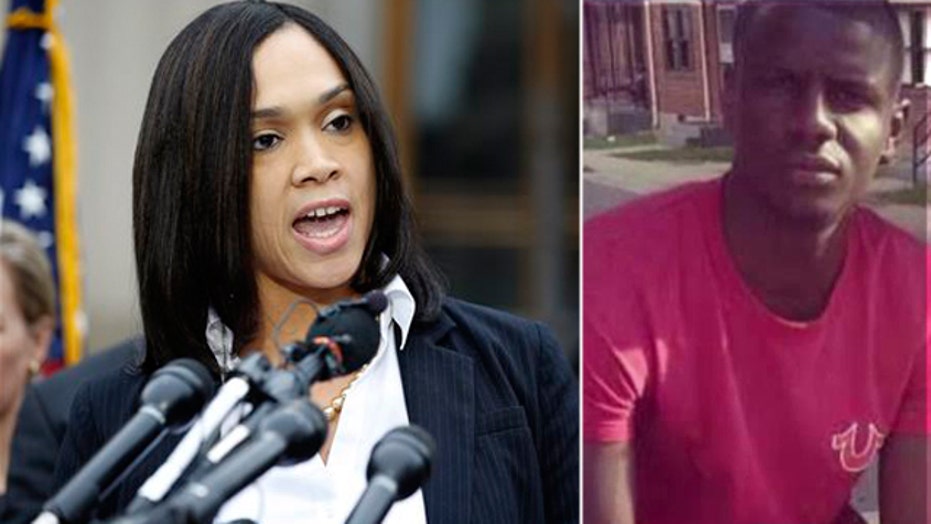 Reaction to charges against officers in Gray case

Baltimore City State’s Attorney Marilyn Mosby stepped up to the podium Friday at 10:30am. She stood in front of the city’s war memorial and announced what much of the crowd wanted to hear: her office had filed 20 separate charges (including murder and manslaughter) and issued arrest warrants for six Baltimore police officers involved in the death of Freddie Gray, hopefully bringing to an end the rioting and looting that had gripped Baltimore—and spread to other cities—over the last week.

Gray, who had been arrested after fleeing from police on April 12, suffered mysterious and eventually fatal spinal injuries while in the back of a police van that was transporting him to the station. He died a week after his arrest.

Some speculated that he suffered the spinal injury as a result of a ‘rough ride,’ a punishing tactic where officers leave a defendant unbuckled and swerve the van to cause him to slam against the interior.

Others thought he was beaten by officers who stopped the van several times on the way to the station.  Matters were complicated further when it was rumored that the medical examiner’s report concluded that Mr. Gray had caused his own injury while slamming himself against the inside of the van out of apparent frustration over being arrested—a fact that was supported by another prisoner in the van who later partially recanted that alleged statement.

As a former police officer I can attest that defendants who are frustrated from having been arrested sometimes slam their heads against the “cage” of a police car, often to the amazement of people in nearby cars.  Not surprisingly, that often leads to claims in court that the officers beat the defendant.  But that doesn’t mean that’s what happened here.  It seems highly unlikely that someone would bang their head with sufficient force to sever their own spine.

Finally, all of the rumors and speculation were put to rest Friday by Ms. Mosby’s presentation of her office’s finding of probable cause for the charges, right?  Not quite.

Although I trust that Ms. Mosby is a dedicated public servant who knows that no one is above the law, a principle we should all embrace, her factual basis for the charges left more questions unanswered.

First, her office’s investigation concluded the officers arrested Gray without probable cause, apparently based on his possession of a knife that was lawful to possess in Maryland.  I have no disagreement with her finding a lack of probable cause.  Officers are allowed to chase a fleeing suspect but once they catch him there must be probable cause to believe he committed a crime, beyond just fleeing, in order to arrest him.

The officers in this case were apparently mistaken about the criminality of possessing the knife, a fact that would certainly expose them to civil liability for money damages but not typically to criminal prosecution.  Otherwise, officers wouldn’t arrest anyone without waiting for a state attorney to give them an official opinion on the validity of the arrest. You can imagine how that would cause the criminal justice system to grind to a halt.  Yet the officers are charged with assault and false imprisonment, apparently for restraining Mr. Gray during the mistaken arrest.

The more serious criminal charges stem from the officers’ failure to buckle Mr. Gray in to his seat while transporting him and ignoring his pleas for medical attention.  There was no mention of the rumored “rough ride” or of the suggestion that he was beaten in the back of the van by the officers, both of which would clearly give rise to a charge of second degree murder.  In fact, there was no mention or explanation of how he received the critical cervical injury at all.

So we are left to conclude that Mr. Gray suffered this life-ending injury as a result of the negligence of the six officers charged.

Don’t get me wrong, if your loved one inadvertently dies because the police failed to buckle him in the transport van and failed to render aid, your loss is as huge as if it had been an intentional act.  But those details matter when criminal charges are filed.  Every criminal charge is made up of elements that must be proven.

Murder requires a criminal state of mind—whether it be premeditation, ill will, hatred, spite; it’s what differentiates murder from manslaughter.

Manslaughter, on the other hand, does not stem from intent to do harm but rather from a high level of negligence often called gross negligence or culpable negligence; a higher fault than simply failing to use reasonable care.

What Ms. Mosby presented was a strong argument for negligence, a civil wrong, or possibly the criminal charge of manslaughter if a jury agrees that failing to render aid when requested or failing to buckle Mr. Gray in to his seat amounts to gross or culpable negligence.  But it doesn’t lay out a case of murder.  Admittedly, she may not have disclosed all of the facts and may know details that warrant a murder charge, although it makes no sense that she would lay out incomplete facts to explain her case to the public since she expressly directed her comments to both citizens and police officers.

Further complicating her case is the fact that every day people who are arrested often claim to be injured, in pain or having difficulty breathing.  It is a common tactic used to get an officer to loosen the handcuffs or release their grip on the defendant so he can continue to fight.  As a result, officers faced with such claims sometimes transport the defendant to the hospital wing of their local jail for checkup, but they don’t usually stop on the road and wait for Fire Rescue to arrive.  Under those circumstances is a jury going to feel that officers who don’t take immediate action on those frequent claims of injury not only deserve to be sued but deserve to go to prison?  Clearly, if they had known Freddie Gray would die, the officers would have transported him quickly and directly to an emergency room. But as they say, hindsight is 20/20.

In the end, a jury will decide what criminal charges, if any, are appropriate in this case.  Based on the facts laid out today, however, the prosecutor failed to lay out a basis for murder and even manslaughter may be a difficult sale.

Alex Ferrer is a former police officer, attorney and  judge. He was the host of the long-running syndicated court TV show "Judge Alex."