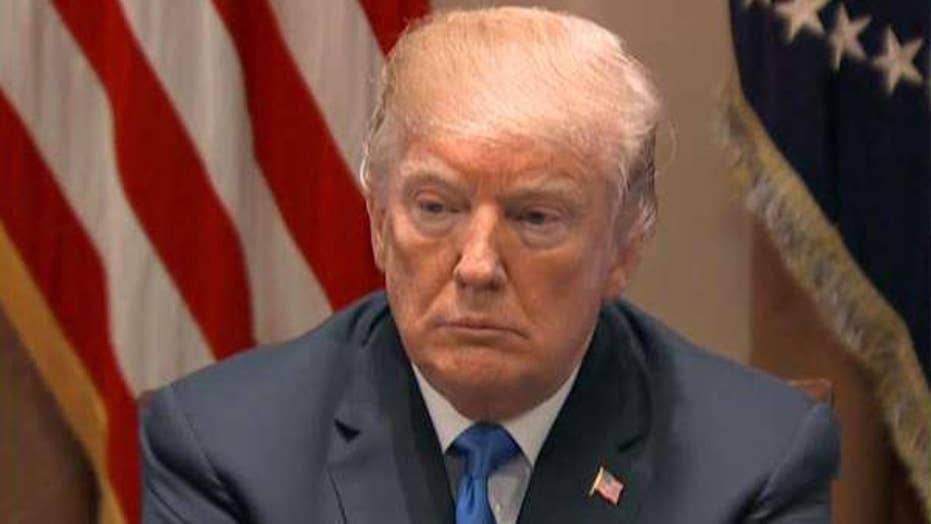 Trump on school shootings: We must turn grief into action

President Trump hosts meeting on gun violence with Democratic and Republican lawmakers and discusses possible solutions for ending mass shootings at schools and other public spaces.

No child should have to fear going to school or walking the neighborhood streets. And yet, we know that many children and their parents do live in fear, in part because of a string of cowardly and barbaric school shootings in recent years.

Just last month, the American people were shocked and horrified by the vicious murder of 17 innocent students and educators in Parkland, Florida.

Fortunately, we have a law-and-order president who is determined to make America safer. President Trump and his administration are moving swiftly and taking action.

The Department of Justice will provide $1 million in emergency funding to Florida law enforcement agencies in Broward County and other jurisdictions that assisted with the response and investigation of the shootings at Marjory Stoneman Douglas High School.

We have a law-and-order president who is determined to make America safer. President Trump and his administration are moving swiftly and taking action.

After the mass murder in Las Vegas back in October, President Trump instructed his administration to review how the Bureau of Alcohol, Tobacco, Firearms and Explosives (ATF) – our lead firearms agency – has regulated bump stocks and similar devices.

This month, the Department of Justice proposed a rule clarifying that bump stocks should be prohibited because they effectively transform legal semi-automatic weapons into machine guns, which have been illegal in this country for decades under federal law.

First, we are investing in putting more highly trained armed personnel in our schools. Every year, the Department of Justice helps local communities hire more police officers. Now we will give priority consideration to cities and states that specifically want to hire more school police officers.

But we are just getting started. With this new policy in place, and with our continued emphasis on federal prosecution of the most dangerous gun offenders, we intend to break these records again.

We are holding federal agencies – as well as state and local jurisdictions – accountable for providing us with the information we need to know if someone shouldn’t have a gun.

I have ordered the FBI to identify the jurisdictions that fail to give us the information we need in a timely fashion. One problem we face all too often is that the FBI will have access to an arrest record, but there is no indication of the final outcome of the case. As a result of this information gap, people who are prohibited from having a gun can still pass a background check.

But we will help the states in this process. We will provide funding for increasing accessibility to the input of criminal records, especially domestic violence convictions, and information on people who have firearm restrictions related to mental illness.

Additionally, we must ensure that we properly use information coming in from the public. That’s why we will also improve the way Department of Justice law enforcement agencies respond to tips from the public. I have ordered an immediate audit and review of our existing process. We will ensure that we respond to life-saving and crime-fighting tips quickly and effectively.

With these new measures in place, we are better positioned to disarm criminals and protect the law-abiding people of this country. Achieving those two goals will help us achieve President Trump’s goal of a safer America.