Andrew McCabe is a good witness and he made a favorable impression, at least on me, in his '60 Minutes' interview with Scott Pelley. Pelley and his editors did a great job highlighting McCabe’s down-to-earth likability. Unlike Jim Comey, a career prosecutor and corporate lawyer before he became FBI director, former deputy director McCabe is a career agent; his relation of events smacks of the Bureau’s “just the facts, ma’am” ethos. And McCabe’s account of Trump telling him to ask his wife what it was like to be a “loser” (after she lost a Virginia state senate race) is devastating, precisely because it sounds just like something Trump would say.

That aside, there are problems with McCabe’s story.

First, Pelley failed to ask him the screamingly obvious questions: What about Russia did Trump want included in Deputy Attorney General Rod Rosenstein’s memo supporting Comey’s dismissal? McCabe obliquely said Trump wanted Rosenstein “to put Russia in” the memo about Comey (I’m quoting from memory). But Pelley never asked what in particular about Russia Trump wanted included. What about Russia was Trump referring to when he spoke -- in conversations with NBC News and Russian diplomats -- of Russia’s part in Comey’s firing? Pelley highlighted the word “Russia,” but he sidestepped what Trump was concerned about regarding Russia.

The viewer was thus left to conclude, from McCabe’s other comments, that Trump must have fired the FBI director because he was fearful of the Bureau’s investigation of Russia’s interference in the election; because he was concerned that the FBI would find that Russia intended to benefit Trump and would therefore deduce that Trump was complicit. 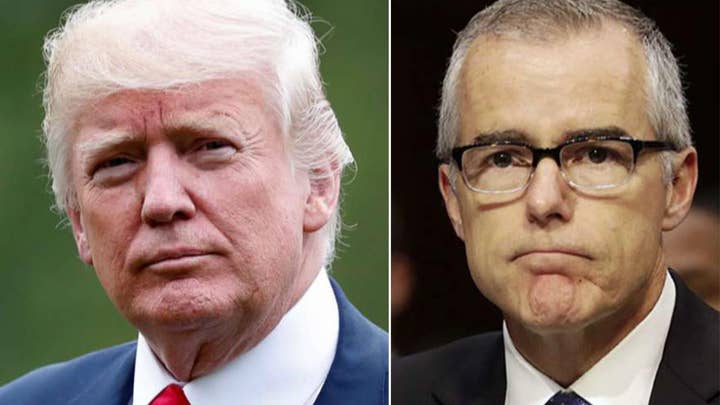 But that is misleading. We know that what Trump wanted made public was something very specific about Russia, namely, that Comey repeatedly told the president he was not a suspect in the Russia investigation. Trump was frustrated -- over time, ballistic -- over the fact that Comey was privately telling him that he was not under investigation, yet making statements that would lead the public to believe Trump was suspected of conspiring in Russia’s hacking operations. Trump wanted Comey to state publicly that he was not a suspect; Comey’s refusal to do so made no sense to the president, especially after Comey gratuitously implied, in his stunning March 2017 House testimony, that Trump was a suspect.