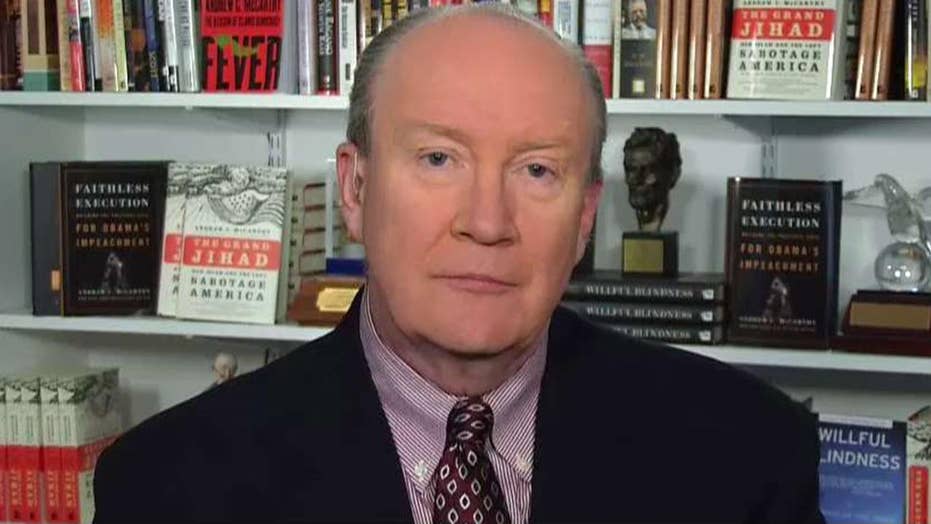 The major takeaway from the 40-page sentencing memorandum filed by federal prosecutors Friday for Michael Cohen, President Trump’s former personal attorney, is this: The president is very likely to be indicted on a charge of violating federal campaign finance laws.

It has been obvious for some time that President Trump is the principal subject of the investigation still being conducted by the U.S. attorney for the Southern District of New York.

Yes, Cohen has stated he did the hands-on work in orchestrating hush-money payments to two women who claim to have had sexual liaisons with Trump many years ago (liaisons Trump denies).

But when Cohen pleaded guilty in August, prosecutors induced him to make an extraordinary statement in open court: the payments to the women were made “in coordination with and at the direction of” the candidate for federal office – Donald Trump.

Prosecutors would not have done this if the president was not on their radar screen. Indeed, if the president was not implicated, I suspect they would not have prosecuted Cohen for campaign finance violations at all. Those charges had a negligible impact on the jail time Cohen faces, which is driven by the more serious offenses of tax and financial institution fraud, involving millions of dollars.

Moreover, campaign finance infractions are often settled by payment of an administrative fine, not turned into felony prosecutions. To be sure, federal prosecutors in New York City have charged them as felonies before – most notably in 2014 against Dinesh D’Souza, whom Trump later pardoned.

In marked contrast, though, when it was discovered that Barack Obama’s 2008 presidential campaign was guilty of violations involving nearly $2 million – an amount that dwarfs the $280,000 in Cohen’s case – the Obama Justice Department decided not to prosecute. Instead, the matter was quietly disposed of by a $375,000 fine by the Federal Election Commission.

Nevertheless, the sentencing memo in Cohen’s case reads like an ode to campaign finance laws. Unlike other types of pleadings, which can be dry and legalistic, sentencing memoranda are meant to persuade the sentencing judge, and they often read like dramatic jury arguments.

This one is no exception, urging that campaign finance laws are vital to election integrity – “painstakingly” designed by Congress “to promote transparency and prevent wealthy individuals” from fueling the “public cynicism” that “the political process belongs to the rich and powerful.”

In the four corners of this case, these words apply to Cohen. But President Trump cannot feel too comfortable upon reading them.

Nor can the Trump legal team take solace when the campaign finance charges to which Cohen pleaded guilty are scrutinized. Thus far, the team has been dismissive, noting that campaign finance law has different standards for a candidate than for other donors.

Contributions such as Cohen made were limited in 2016 to a $2,700 donation, but there is no limit on a candidate’s spending. Thus, the argument goes, even if the hush-money payments vastly exceeded Cohen’s legal ceiling, Trump himself could have made them legally.

There are flaws in this theory.

To begin with, the campaign finance laws do not just prescribe limits on spending; they mandate disclosure. This is a leitmotif of the sentencing memo: Congress demanded transparency. A candidate may spend unlimited amounts on the campaign, but the amounts spent must be reported to the Federal Election Commission.

The sentencing memo for Cohen argues that the hush money payments were not merely unreported. It states that Cohen and the Trump organization – the president’s company – went to great lengths to conceal them by fraudulent bookkeeping.

This was the offense centering on Playboy model Karen McDougal. It involves David Pecker, a longtime friend of the president and of Cohen. Pecker runs American Media, Inc., which controls the National Enquirer.

According to prosecutors, Pecker arranged with Cohen that the Enquirer would buy McDougal’s story for $150,000 and bury it. Although it was contemplated that Cohen would reimburse Pecker (and then be reimbursed by Trump), the reimbursement did not happen.

Cohen, therefore, pleaded guilty not to making his own excessive contribution but to causing a third party to make an illegal contribution.

Cohen says he was operating at Trump’s direction. Logically, then, if this is true and Cohen caused the third-party illegal contribution, so did the president.

Notably: prosecutors have given Pecker and another American Media executive, Dylan Howard, immunity from prosecution. Do you think prosecutors did that to tighten up the case against Cohen? I don’t.

As for the second campaign finance charge, that involves an illegal payment by Cohen – the $130,000 to Stephanie Clifford (who goes by the stage name “Stormy Daniels”). There are two things to bear in mind about it.

The fact that Trump could have made the payment himself without violating the law does not excuse allegedly causing Cohen to violate the law.

Trump’s point that he had no personal limit on spending is also undermined by the facts that (a) the payment was not reported, and (b) the purpose of the transaction was to distance him from the payment (which is why the non-disclosure agreement employs pseudonyms rather than referring to Trump and Clifford by name).

Second, the violation to which Cohen pleaded guilty is not merely making illegal expenditures; it also includes making such expenditures “in cooperation, consultation, or concert, with or at the request or suggestion of, a candidate.” (Section 30116(a)(7)(A) of the election laws).

Again, this is why Cohen was pushed at his guilty plea proceeding to state that he acted “in coordination with and at the direction of” Trump. It is an assertion the prosecutors emphasize in the sentencing memo. The thrust of their allegation is that Cohen and Trump are confederates in an illegal contribution that Cohen made only because Trump directed him to do so.

This is not to suggest that the president is without cards to play. Campaign finance violations have a high proof threshold for intent. President Trump could argue that because there was no spending limit on his contributions, he did not think about the campaign-finance implications, much less willfully violate them.

There is, furthermore, a significant legal question about whether the hush-money payments here qualify as “in-kind” campaign contributions. There is nothing illegal per se in making a non-disclosure agreement; they are quite common. The criminal law comes into play only if the non-disclosure payment is deemed a donation for purposes of influencing a political campaign.

Arguably, the payment is not a donation if it was made for an expense that was independent of the campaign – that is, money that would have had to be paid even if there were no campaign.

Cohen chose to plead guilty and forfeited the right to contest this point. That concession is not binding on Trump. If the president is charged, I expect he would vigorously argue that the payment was not a campaign contribution.

There are other salient issues to consider. Justice Department guidance holds that a sitting president may not be indicted. If prosecutors in the Southern District of New York believe they have a case against the president, must they hold off until after he is out of office?

If President Trump were to win re-election, he would not be out of office until 2024, when the five-year statute of limitations on a 2016 offense would have lapsed.

More importantly, do campaign finance violations qualify as “high crimes and misdemeanors,” which is the constitutional standard for impeachment? It is hard to imagine an infraction that the Justice Department often elects not to prosecute is sufficiently egregious to rise to that level, but the debate on this point between partisans would be intense.

Those are all questions for another day. The point for this day is that the Cohen case in New York City is not about Cohen. The president is in peril of being charged.