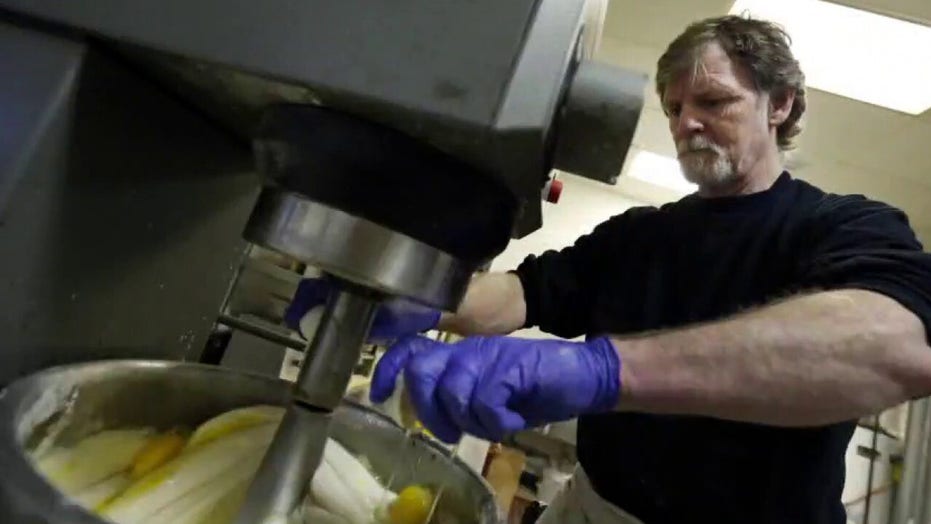 A Colorado baker who won a Supreme Court case is being targeted again over refusal to bake a birthday cake in honor of a woman’s gender transition; Masterpiece Cakeshop owner Jack Phillips and General Counsel for Alliance Defending Freedom Kristen Waggoner join ‘Fox and Friends.’

Now that the dust has settled around the passage of the Equality Act in the House of Representatives, it is time for proactive presidential leadership as the proposal moves to the Senate.

On the campaign trail, Joe Biden identified the bill as a top legislative priority and referred to it as "historic." He named trans rights "the civil rights issue of our time," as if there were no reason to perhaps tread a bit more cautiously.

Likewise, the media’s celebratory coverage of the House action ignored very real countervailing interests that would be steamrolled by the act, namely people of faith’s ability to live, work and act publicly in ways consistent with their deepest religious convictions.

It would behoove the president, as his first bold act of presidential leadership, to reconsider his reflexive support for the Equality Act and to put his presidential weight behind changes that would honor both the rights of the LGBTQ community and the genuine faith convictions that are often in tension with those rights.

It is hard to imagine a weightier and more significant policy conflict. The reality is that both religious convictions and sexual identity are spheres of profound importance, whence people derive ultimate meaning for their lives.

LGBTQ persons rightly wish to have their full membership in society codified in antidiscrimination laws, something that is absent in federal civil rights laws and in many states. Similarly those with traditional faith-derived views on sexuality, family and marriage feel compelled by their beliefs to live in obedience to the transcendent.

One cannot overstate how consequential and far-reaching this clash is as a matter of law and policy. It implicates LGBTQ access to health care and workplace and housing protections, as well as the ability of faith-based schools, small businesses and nonprofits to hire folks and institute policies that align with their theological convictions.

Given the intensity of the political and legal conflict, it is regrettable that it has thus far been waged as a zero-sum game, pitting the competing interests against each other in highly divisive, winner-take-all ways. That polarization is evident in the relevant state laws.

Twenty-two states and the District of Columbia have sexual orientation and gender identity (SOGI) laws that offer additional LGBTQ protections, with nary a nod to the impact on the religious interests at stake. About the same number of states have religious freedom restoration acts (RFRAs) that bolster religious liberty, even in the absence of LGBTQ civil rights protections.

The Equality Act only doubles down on this zero-sum politics. While it takes the long overdue step of adding sexual orientation and gender identity to federal civil rights laws, it makes no effort to acknowledge the interests on the other side and is an aggressive attempt to crush faith convictions as an authentic source of behavior in public life.

First, it broadens the definition of covered "public accommodations" far beyond the conventional meaning of the term, so dramatically that religious schools and faith-based nonprofits will likely fall within its ambit.

Biden’s approach ought to be dictated by a pragmatic sense of what is achievable.

Second, it provides no exemptions whatsoever for religiously motivated behavior, in stark contrast to virtually all existing nondiscrimination statutes at the federal level.

Finally, it explicitly nullifies the federal Religious Freedom Restoration Act as a tool for judicially balancing religious rights with the compelling governmental interest in nondiscrimination.

While the pressure to rubber stamp the current version of the Equality Act is sure to be intense, compelling reasons exist for Biden to exert his presidential authority by coupling broad LGBTQ nondiscrimination protections with carefully defined carve outs for religious charities, parochial schools and smaller faith-based businesses.

First, it is good politics. Most Americans are remarkably fair-minded. Surveys leave no doubt about the broad support for workplace and housing protections for LGBTQ people.

At first glance, majorities appear to oppose businesses refusing to serve gay or trans customers. But on the more nuanced question of whether to compel a wedding vendor to take part in a marriage that runs counter to their religious views or to force a Catholic hospital to remove otherwise healthy organs as part of gender transition surgery, people are much more inclined to respect the religious position, as long as other available options exist to provide the service.

The president needs a "Sister Souljah" moment to mark his independence from the scary strain of the Democratic party and to assert his identity not only as leader of his party, but of the entire country. Given how assiduously he has tended to the left wing of the party in the first two months of his presidency, they are not going anywhere. But asserting control on this issue would go far to convincing people of faith that their religious commitments do not make them outcasts in this administration.

Faithful centrists need some tangible evidence that they are not loathed by a Biden-led Democratic party and sending that message might have the salutary political effect of putting the party on majoritarian footing in Congress in upcoming elections.

Second, it is good policy. Biden’s approach ought to be dictated by a pragmatic sense of what is achievable. Even if he were to back the Equality Act, its passage in the Senate is unlikely, given the 50-50 partisan split and the need for 60 votes to clear a filibuster. Even if it could pass in its current form, it would almost surely be grounded on the shoals of a six-member, pro-religious liberty majority in the Supreme Court.

In contrast, presidential leadership behind an amended Equality Act that imports religious liberty protections from other nondiscrimination laws would have a real chance of passage, and would be a momentous legislative accomplishment to Biden’s credit.

The president also needs to be mindful of the deleterious ripple effect the Equality Act would have on the government’s ability to effectively tend to the needs of society.

As a serious Catholic, Biden knows well the yeoman’s work done by Catholic agencies and their faith-based counterparts in facilitating adoption and foster care, providing shelter and meals to the homeless, treating substance abuse, and meeting virtually every other societal need. Will we really be better able to meet these needs by coercing faith-based providers to the point where they withdraw from the policy arena, as has happened with adoption and foster care services?

A good working definition of good policy is that which maximizes the good for the greatest number of people. A law that for the first time provides federal antidiscrimination protections for LGBTQ in housing, the workplace, and public accommodations while simultaneously freeing faith-based businesses, charities, schools and health care providers to act consistently with their deep-seated religious beliefs matches that definition.

Finally, it is the right thing to do. Biden effectively built his presidential candidacy on an everyman appeal to unity and moving beyond the divisiveness of the Trump era. His inaugural speech, with over a dozen appeals to unity, suggested that he was genuinely intent on working to unite a deeply divided and polarized America. But to date it has only been rhetorical.

It is time for President Biden to live out his exhortation for us to "end this uncivil war" of division.

To move forward with the Equality Act is to reinforce the lie that every person who by faith adheres to traditional conceptions of life, marriage and family is bigoted, evil, hateful and wicked. I am convinced the president knows better.

My favorite line of the inaugural speech was when Biden encouraged us to "take measure of [him] and [his] heart." When I do, I see an essential goodness that I attribute at least in part to his Catholic faith. When Biden invoked God, faith and sacred conviction, he was explicitly acknowledging the faith that animates tens of millions of Americans.

The beliefs and behavior of the two sides of this issue may be morally difficult to reconcile, but they are not legally or politically irreconcilable. Pluralism demands that we seek paths to living peaceably together, even when we are at odds over the matters of deepest import. It would be a genuine act of statesmanship if the president were to lead the country down that path on this most divisive of issues.

David Ryden is the Peter C. and Emajean Cook Professor of Political Science at Hope College in Holland, Michigan.