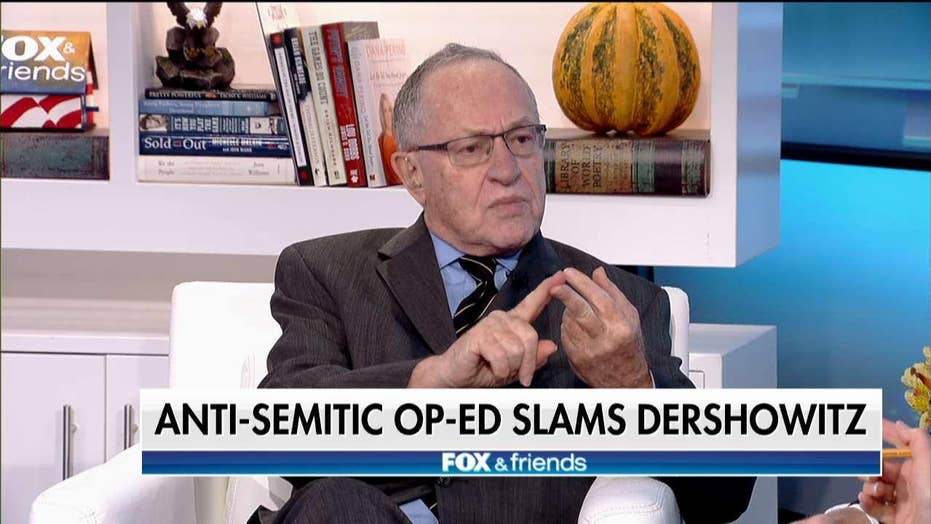 Dershowitz: How Universities Are 'Miseducating the Future Leaders of America'

A recent op-ed by Matthew Taylor in the Daily Californian – the student newspaper at the University of California, Berkeley – levels an anti-Semitic attack against me and falsely states that I have blood on my hands and am “culpable of the perpetuation of  … atrocities” by Israel. The student newspaper refuses to publish my factual response to its attack, so I am doing so in this piece.

In his op-ed, Taylor criticizes a cartoonist at his student newspaper for caricaturing me as a predatory spider “crushing a Palestinian with one foot and holding up an IDF (Israeli Defense Forces) soldier who assassinates a Palestinian civilian,” with blood on my hands. But at the same time, Taylor says the cartoon was “fair criticism.”

In support of his conclusion, Taylor proclaims – without citing any evidence – that Israel is “in fact an egregious human rights abuser,” murders unarmed and innocent civilians, including “underage Palestinians,” commits “intentional…atrocities” and engages in “pinkwashing.”

He calls me a “privileged professor who is culpable for the perpetuation of Israel’s atrocities,” despite my long record of advocating a peaceful two-state outcome between Israel and the Palestinians.

I would not usually reply to such ignorance and oversimplified attacks. But because these false accusations have become a staple of hard-left attacks singling out only the nation-state of the Jewish people for such defamation, I will disprove each of them in turn.

The core characteristic of anti-Semitism is the assertion that everything the Jews do is wrong, and everything that is wrong is done by the Jews. That is the bigoted thesis of the anti-Israel campaign whose supporters absurdly claim that Israel is engaging in “pinkwashing.”

Bigots such as Taylor hate Israel more than they care about gay rights, so they would apparently prefer to see Israel treat gays the way Israel’s enemies do. To the unthinking anti-Semite, it doesn’t matter how the Jewish manipulation works.

The anti-Semite just knows that there must be something sinister at work if Jews do anything positive. The same is now true for the unthinking anti-Israel bigot. In fact, the very Israelis who are most supportive of gay rights are also the most supportive of Palestinian rights. Pinkwashing is an anti-Semitic canard.

Moreover, Taylor argues that Israel commits “intentional” atrocities against innocent Palestinians including children. The reality is that the Israeli military’s efforts to stop Hamas from indiscriminately killing Israeli citizens with rockets and through terror tunnels has been the opposite of indiscriminate, as Col. Richard Kemp and other military experts have attested.

Kemp has argued that no other country in history has gone to such great lengths as Israel to distinguish between military and civilian targets, even in the face of an enemy that regularly uses its own population as human shields, and that hides military equipment in schools and hospitals.

Israel’s efforts to protect its citizens compare favorably to military bombing campaigns led by the U.S. and NATO in Iraq, Syria, and other areas in which civilians have also been used as human shields. Israel goes to enormous lengths to reduce the number of civilian casualties – even to the point of foregoing legitimate targets that are too close to civilians.

Yes, Israel has defended its citizens against terrorist attacks by underage Palestinians because Palestinian terrorist leaders deliberately recruit underage Palestinians. When I engaged in a debate on the Boycott, Divest and Sanction (BDS) movement that targets Israel at the Oxford Union, I issued the following challenge to the audience and to my opponent:

Name a single country in the history of the world, faced with threats comparable to those faced by Israel, that has a better record of human rights, compliance with the rule of law or seeking to minimize civilian casualties. The room was completely silent.

Taylor also refers to the security barrier erected by the Israeli government – in response to a spate of deadly suicide attacks where the bombers had infiltrated from Palestinian villages in the West Bank – as “the apartheid” wall.

In doing so, Taylor reveals his own ignorance of the realities on the ground, and wrongly exploits the apartheid analogy and devalues the anti-apartheid struggle in South Africa during the days of white minority rule and mandated segregation and discrimination against that nation’s black majority.

It is well known that Israel recognizes fully the rights of Christians and Muslims and prohibits any discrimination based on religion. Muslim and Christian citizens of Israel (of which there are more than 1 million) have the right to vote and have elected members Israel’s parliament, some of whom even oppose Israel’s right to exist.

There is complete freedom of dissent in Israel. Muslims, Christians and Jews alike practice it vigorously. That cannot be said of any Arab or Muslim state, or of the Palestinian Authority.

Taylor reveals his own bigotry when he says that “Israel’s apologists intimidated the Daily Californian into retracting the entire cartoon.” But as he himself acknowledges, the most significant criticism came from the university’s Chancellor, Carol Christ, who is not an “Israel apologist.”

Taylor also mendaciously fails to mention that I adamantly opposed withdrawing or censoring the anti-Semitic cartoon, because I want the world to see it and hold accountable those responsible for it. Likewise, I would oppose censoring Taylor’s anti-Semitic op-ed.

Yes, anti-Semitic. Let me explain why. I agree that there is a vast difference between “actual anti-Semitism” and “legitimate criticism of Israel.” But Taylor is not merely criticizing Israel. He is deliberately lying about its actions and policies in order to delegitimize its very existence.

Taylor is singling out only the nation-state of the Jewish people for such defamatory delegitimization, and he is invoking the crassly anti-Semitic libel of “pinkwashing.” Finally, he uses code words – such as “privileged” and “Israel’s apologists” – to suggest a conspiracy of Jewish power that censors anti-Israel expression.