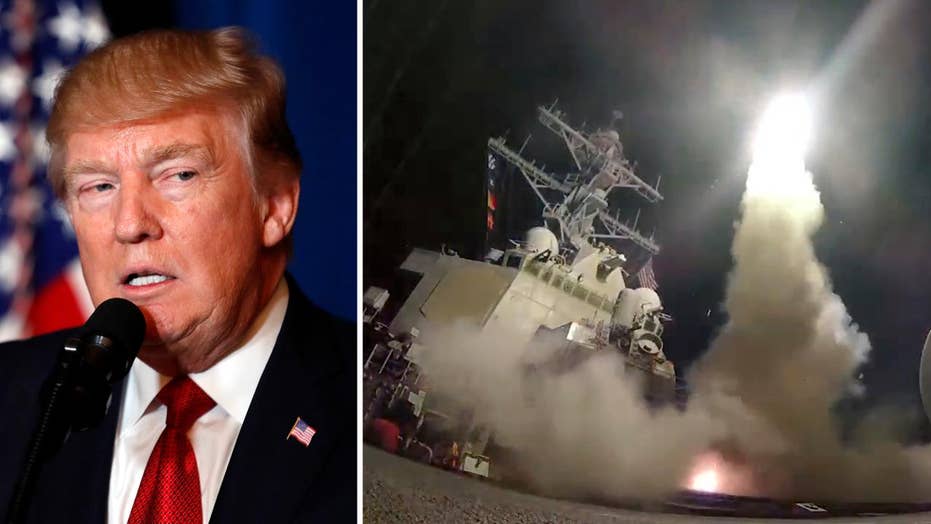 Trump said to be pleased with Syria strike, response

After the invasion of Iraq in 2003, David Petraeus, the general commanding coalition forces in the north, famously asked “tell me how this ends?”

Its plaintive appeal for a political end state toward which military force is one contributory element haunts — and should haunt — strategists at the commencement of military operations.

President Obama allowed not having a comfortable answer to prevent him from using military force to punish the Assad government from using chemical weapons against the Syrian people; President Trump either has a secret plan for Syria (which has been his claim since before his election), or greater risk tolerance.

The administration continues to send mixed signals about what the stand-off strike on Shayrat airbase means in the broader context of Syria.

The president was expansively Wilsonian in his statement on Thursday evening, suggesting more to come.

U.N. Ambassador Nikkey Haley’s statements in the U.N. Security Council on Friday also portended further action. But the president evidently selected the most restrictive of the attack options offered by the Pentagon.

Secretary of State Tillerson disavowed any change in policy.

Secretary of Defense Mattis said nothing.

It would be understandable if the administration was still working through to an understanding of where this ends. They’re still relatively new in office — no Deputy Secretaries in either Defense or State, a national security adviser in place just a couple of weeks, everyone finding their footing and policy reviews underway but not complete.

The Syrian government’s chemical weapons attack isn’t the first of their war crimes, but it was a particularly odious one, deserving of retribution by civilized powers.  It recovered initiative, forcing adversaries to adjust.

As Peter Feaver has pointed out, it increases U.S. leverage on a variety of fronts.  Trump needn’t have solved everything to have done something beneficial Thursday.

Still, they will need — and soon — to explain how Thursday’s attack squares with what appeared to be a policy of focusing on the defeat of ISIS and leaving Bashir al Assad in power.

Mike O’Hanlon has suggested several smart adjustments to policy that have the potential for real progress in bringing the Syrian war to an end: more assistance to Kurdish and Sunni groups fighting ISIS and Al Qaeda (with post-war assistance conditioned on weapons returns to mollify Turkey), with temporarily protected autonomous governance zones for Kurds and Sunni in a federated Syria.

These and others should be considered if a shift in policy is genuinely underway to involve the U.S. more directly in the Syrian war.

A one-off attack to punish chemical weapons use is also a defensible policy. It establishes boundaries within which states are constrained even in fighting protracted civil wars, puts other potential WMD users on notice that the U.S. will enforce the norms that preclude them.

It reassures allies reliant on American security guarantees that we are willing to run risks for our interests and the broader good.

It shows the Russians, Iranians, and other potential adversaries that we are not hesitant to use force even in complicated circumstances where we risk confrontation with them. Moreover, the president approved the attacks while also meeting with the Chinese President, demonstrating the U.S. can manage many problems simultaneously.

President Trump has claimed keeping strategy secret as a virtue.  As with so many things the president says, there is some truth to it: free societies fight at a disadvantage when they telegraph all their actions. But public debate and legislative oversight are essential for building a stable basis of support for the president’s policies. The president ought to explain to the nation how this ends.

Kori Schake is a Hoover Institution Research Fellow at Stanford University. She is the editor, with Secretary of Defense James Mattis, of "Warriors and Citizens: American Views of Our Military."