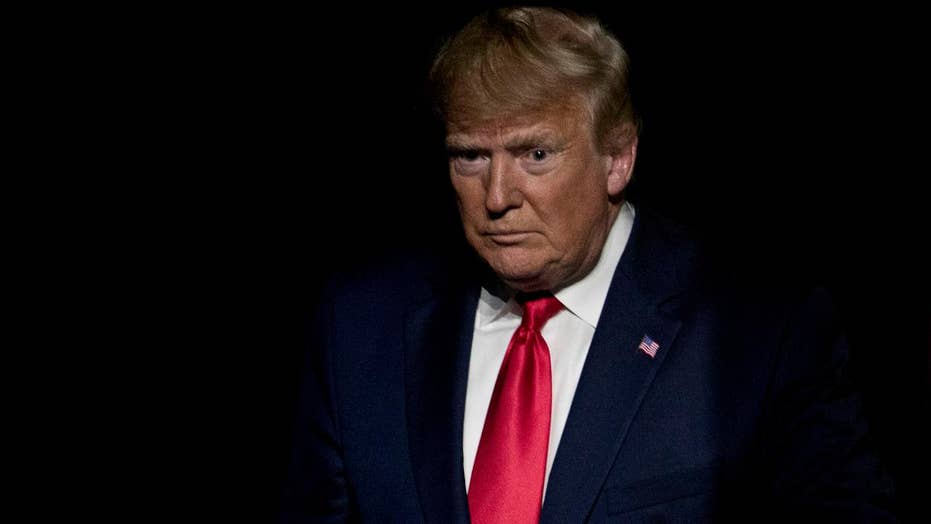 As he responds to vote to impeach him.

The nearly impossible has now become a near certainty.

After weeks of choreographed indignation by Democratic leaders in Congress and “witnesses” offering no proof of impeachable wrongdoing; despite headlines and columnists screaming for his immediate ouster; and notwithstanding 24/7 attacks from media grumps still sore about 2016, President Trump is not only back in the game, but on his game.

Unpredictably, and unnervingly (for Democrats, anti-Trumpers, liberal loathers and others trapped in serial denial), impeachment is starting to give the president’s poll numbers a shot of political adrenalin … and his detractors a fresh jolt of reality.

LIZ PEEK: QUEEN PELOSI WANTS TO RULE THE SENATE AND NATION BUT VOTERS WILL REVOLT

Recent polling from Fox News confirms that the president’s job approval ratings (often a leading indicator of a candidate’s fate) have swung seven points to the good over the past six weeks. The thirst for impeachment has steadied or ebbed.

Most importantly, for those looking for what may lie ahead, the president not only bests every Democratic contender in the most recent national USA Today/Suffolk University poll (plus-3 over Biden, plus-5 over Sanders,  plus-10 vs. Buttigieg) but in the all-important “battleground states.”

The Optimus poll last week showed the president had taken a lead in a survey of three of these states (Michigan, Pennsylvania and Wisconsin), and that voters in all three now oppose the president’s impeachment and removal. This is political gold for President Trump because if he carries most or all of the battlegrounds (including Florida, Arizona, Iowa and Colorado), he will win again.

Pollsters normally refer to this phenomenon as the “bounce,” an upward surge in a candidate or officeholder's poll numbers traceable to a special event like a State of the Union speech, or a well-received debate performance, or a significant flight of paid TV, or a historic triumph like Operation Desert Storm.

Yet this emerging “bounce” isn’t emanating from a ticker-tape parade for a world champion, or a significant breakthrough for mankind, but from the consensus that we’ve simply had it with Washington.

Enough of the political pontificating and holier-than-thou posturing.

Enough of the non-ending investigations from a never-producing Congress.

Enough of the media so intent on driving this president from office that they willingly bury any good news with dire warnings of a constitutional Armageddon. A recent study by JP Morgan’s Michael Cembalest confirmed that despite a record-breaking stock market, and the best job creation since the 1890s – “positive economic news” was only the 16th most covered subject last year on four, prime time CNN and MSNBC news shows.

Why, amid this constitutional clamor, are the president’s approval numbers – and head-to-head 2020 matchups – rising?

In short, Americans have begun to figure out for themselves that impeachment was a set-up job pushed by politicians professing it had nothing to do with politics, or themselves, or the 2020 election, but that it was sparked by a sense of selfless duty.

What we’ve seen so far, courtesy of an AOC-placating Pelosi, a nervous Nadler, and a moralizing Schiff, is anything but selfless or noble.

Not when quid pro quo without the quid didn’t change their verdict, and lack of proof didn’t alter their narrative.  Even the disgrace of some liberal constitutional scholars insulting our intelligence, including one who attacked a 13-year-old child, failed to dissuade the mob from pursuing a public execution.

“Guilty … until proven guilty” would henceforth be accepted as a pillar of Washington (in)justice, and impeaching the president the remedy of angry partisans and nattering naysayers.

So why, amid this constitutional clamor, are the president’s approval numbers – and head-to-head 2020 matchups – rising?

It’s because the old rules no longer apply.

Trump’s crusade against the system, and those who control it, has never been more resonant than it is today – and the kangaroo court of impeachment plays right into that narrative.

So, as Democrats forward two articles of impeachment to the U.S. Senate, and the Senate considers sending Yuletide subpoenas to the Family Biden, the president is on the comeback trail wielding a holiday missive that Nancy Pelosi, Jerry Nadler and Adam Schiff are loathe to hear but did everything to assure: “four more years.”