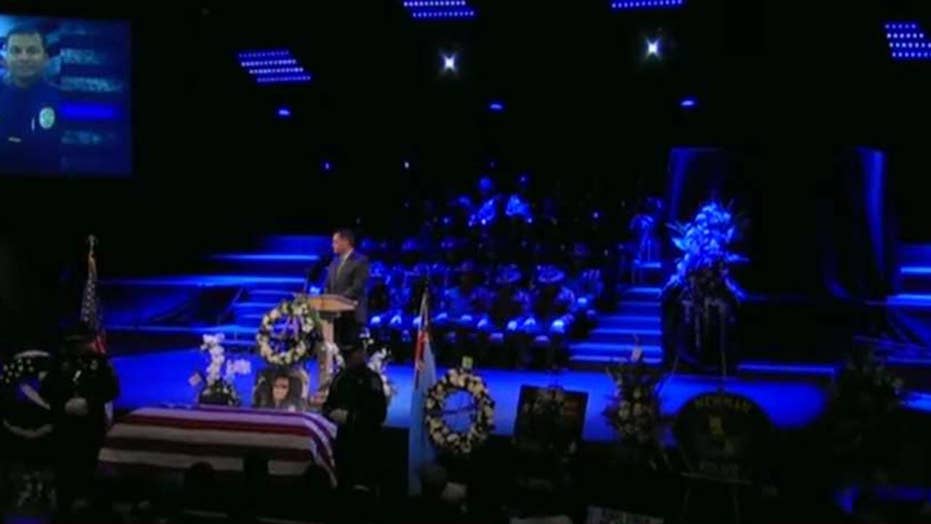 Law enforcement officers from around the country gather in Modesto, California, for funeral of Col. Ronil Singh

Former D.C. police detective Ted Williams says that the law enforcement community is a family that bands together during hard times.

The inconsolable brother of the late Newman, Calif., police officer Ronil Singh told journalists last week, “There’s a lot of people out there that misses him.”

Corporal Singh is gone for good because Gustavo Perez Arriaga shot him dead, officials say. This small-town case has national repercussions. This tale of two immigrants finds Singh and Arriaga as the apotheoses of how Republicans and Democrats respectively see immigration.

Singh, 33, was a model immigrant. He came to America from Fiji – legally. He reportedly drove a four-hour round trip to attend Yuba City’s police academy. He took speech classes to smooth his heavily accented English, his third language. He became a public servant and spent seven-and-a-half years as a cop.

“He came to America to become a police officer,” Newman police Chief Randy Richardson said. “That’s all he wanted to do.” On Facebook, Ugesh Yogi Singh, Ronil’s uncle, called him “my adventurous nephew” and “my family’s Action Hero.”

Alas, Ronil Singh is dead, allegedly shot by an under-the-influence Arriaga, whom he had stopped for a missing license plate.

One of Singh’s colleagues on Newman’s twelve-member force told journalists at a December 28 memorial vigil: “When you lose a brother like Ronil, it’s difficult to process. I don’t think I’ll ever forget how I felt when I got that text message, and I saw it on Facebook. It’s kind of surreal. I would like to get on my phone, call him, and be able to hear his voice. But that’s not going to happen anymore.”

Singh is survived by his wife Anamika, a five-month-old son, and Sam, his black Labrador Retriever K-9 partner. Singh spent Christmas evening with his young family, before starting what would become his final shift ever. Chief Richardson decided to retire Sam and give her to Singh’s widow and orphan. “I will not take another member of that family from them,” he said.

Arriaga, 33, is not a model immigrant. He came to America from Mexico – illegally, crossing the border via Arizona. Yet the notion that the United States suffers a border-security crisis seems lost on Senate Democratic Leader Chuck Schumer of New York and House Speaker Nancy Pelosi of California. They reportedly refused even to listen to Secretary of Homeland Security Kirstjen Nielsen’s classified border-security briefing in the White House Situation Room on Wednesday. Instead, they repeatedly interrupted Nielsen as she tried to detail national security threats on the southern front.