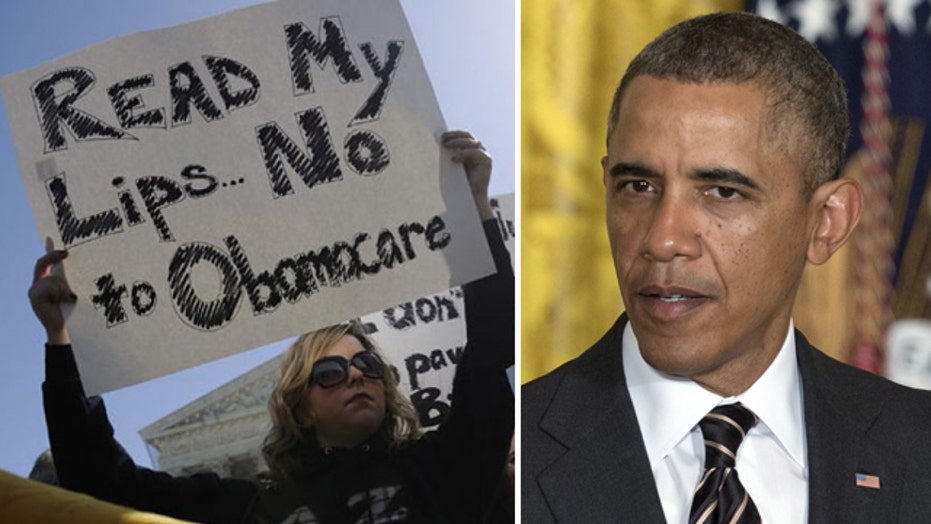 Is messaging the problem?

During his State of the Union address on Tuesday, President Obama will probably declare that his signature health care law is finally starting to work as designed.

We expect him to claim the mantle of “forward” progress and suggest that anyone who opposes the law either does not understand it or simply wants to go “back” to days when insurance companies wreaked havoc on consumers.

Watch Senators Burr, Coburn and Hatch talk with Greta "On the Record" on Monday, January 27 at 7 pm ET.

But the problem is not that American families and businesses do not understand ObamaCare. The problem is that they simply do not like the product the White House has been pushing since 2010.

Why should they? After candidate Obama promised to lower annual health premiums by $2,500 per family, President Obama has advocated policies that have increased them by more than that amount – on average 41 percent in the individual market – with further premium hikes across the horizon as far as the eye can see.

After promising that his health plan would not “add one dime” to the deficit, the president’s team designed a $2.6 trillion budget-buster of a law that created new entitlements and expanded old ones.

Despite supposedly “bending the cost curve,” non-partisan budget experts agree the law increases costs and overall spending. Meanwhile, Medicare and Medicaid spending will roughly double over the coming decade, and our health care spending is still the largest driver of our national debt.

Sadly, instead of building on the innovation that has made our nation the envy of the world, new taxes on life-saving drugs and devices will send jobs overseas, stifle innovation, and only further add to increasing costs as they are passed onto consumers in the form of higher premiums.

Just as bad, ObamaCare itself has become a pre-existing condition for some four or five million consumers who have lost the plan they thought they could keep.

Millions of others are paying thousands of dollars more while having their choice of doctors or hospitals limited.

In response, the administration scrambled to provide “accommodations,” even while stubbornly refusing to revisit the underlying ObamaCare policies that caused the disruption of coverage.

Unfortunately, these problems were entirely predictable. When the law was still a bill being debated in the Senate, we strenuously argued for a different path forward.

We warned the policies of the law would create increased spending, higher costs, fewer choices, and a less stable insurance market.

Sadly, our words were prophetic.

While we believe repealing ObamaCare is an economic and moral necessity, merely criticizing the law is not enough. America needs an ObamaCare replacement.

We agree that the pre-ObamaCare status quo was unsustainable and unacceptable. The problem is that the law failed to fix most of the problems in health care, and made many even worse.

That is why we have decided to outline a proposal to repeal ObamaCare and replace it with sustainable reforms that actually lower health spending, instead of increasing it.

Economists across the spectrum agree that our policies will help put downward pressure on costs. And crucially, we suggest a way to help Americans who have pre-existing conditions in a way that is targeted, fair, and sustainable.

Our proposal starts with a very different set of assumptions from those who designed ObamaCare. We believe Washington, D.C. should actually reform – not try to manage – the private health insurance market.

We trust the choices of individual patients and consumers, not paternalistic bureaucrats.

We encourage consumer engagement not by mandating individuals buy costly coverage, but by giving Americans purchasing power and allowing them to choose a plan of their choice that works for them.

If a consumer does not want a plan that includes coverage for acupuncture, hair loss, maternity coverage and massage – the government shouldn’t force them to buy it.

Americans at all income levels make better choices for themselves if given the opportunity and the choice.

So we adopt policies that will make the market more transparent, competitive, and responsive to consumer demands.

We expand health care savings tools like health savings accounts, which allow consumers to keep more of their dollars for their health care needs.

We also put the brakes on another driver of health care costs -- the practice of defensive medicine -- by suggesting medical liability reforms.

We also have a sustainable, market-driven policy solution to help the many Americans who have pre-existing conditions.

We believe that every American -- whether they work for a Fortune 500 company, a family business, or a start-up company -- deserves protection if they stay enrolled in a health plan.

Before ObamaCare, if an individual tried to buy health coverage on their own, it was not only expensive, they could be denied coverage based on a pre-existing condition.

Our proposal would change that by repealing ObamaCare, and replacing it with a new “continuous coverage” consumer protection. Under our proposal, individuals moving from any health plan to another could not be medically unwritten and denied a plan based on a pre-existing condition.

To help consumers buying coverage on their own or through a small business, we take a range of steps.

- We allow small businesses to band together for coverage – like large corporations do – to negotiate a better deal for health coverage.

- We scrap all of ObamaCare’s rating changes and expensive mandates.

- We offer individuals who are uninsured, self-employed, or working at a small business a tax credit for health coverage to help them be able to buy a plan and keep it.

- We reform – but do not expand – the broken Medicaid entitlement. Too often Medicaid proves the axiom that access to a government health care program is not necessarily access to health care.

Because Medicaid often pays providers so little, roughly half of physicians no longer accept Medicaid patients.

Based on the feedback of many governors, we give states dramatically more flexibility to provide their citizens the health care they need, without all the red tape, micromanagement, and uncertainty from Washington.

Some may suggest the smart political move is to not present an alternative but to simply stand back and watch ObamaCare implode. But the failure of ObamaCare will not guarantee the success of free market health reform. In fact, even Senate Majority Leader Harry Reid and the president have suggested the law is merely a stalking horse for government-run single-payer health care.

More importantly, we believe the American people are ready to consider a patient-centered, market-driven alternative.

Americans know the health care system was not working like it should before ObamaCare. But now they are clearly seeing how the law itself is failing.

Unlike ObamaCare, our plan acknowledges the real world in which people live and operate. We understand that markets are not perfect. But the answer is not a government-centered approach that limits choices and increases costs.

Our problems in health care are solvable if we chart a new path forward. The first step is to embrace a vision that respects individual freedom and puts our country on a more sustainable path.

Richard Burr (R-N.C.) is Chairman of the Senate Intelligence Committee and the author of the Pandemic All-Hazards Preparedness Act.