President Trump utilized the "Barack Obama method" by extending federal unemployment benefits and instituting a payroll tax holiday through a series of executive orders, "one of which stretches the law in a way that a future progressive President will surely cite as a precedent,"  the Wall Street Journal editorial board lamented Monday.

The paper did credit the president for defying what it called the "multi-trillion-dollar blackmail" of House Speaker Nancy Pelosi, D-Calif., and her "wingman," Senate Minority Leader Charles Schumer, D-N.Y. 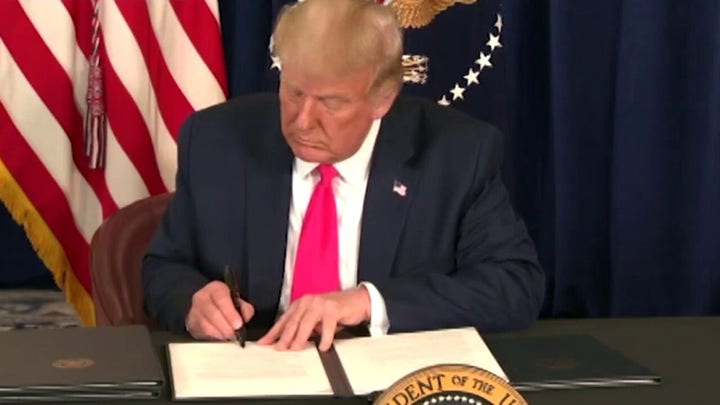 Pelosi, the board wrote, essentially offered Trump and Treasury Secretary Steve Mnuchin "terms of surrender" that included a renewal of the $600-per-week federal unemployment benefit amid a handful of mostly unrelated actions prioritized by liberals.

The Journal wrote that some of the demands included $800 billion in federal aid to states, despite the fact Trump has maintained he doesn't want such a program that could prove a backdoor for badly-run Democratic-majority states to fix systemic fiscal troubles.

The paper went on to call out Pelosi for "partisan hypocrisy" after she accused Trump if acting in an "absurdly unconstitutional" way by issuing the orders while cheerleading Obama's "pen and phone" executive actions relating to ObamaCare and illegal immigration.

"These columns opposed Mr. Obama’s orders, and one constitutional abuse doesn’t justify another," the board said. "Mr. Trump’s FEMA order is a bad legal precedent that a 'President Kamala Harris' could cite if a GOP Congress blocked her agenda on, say, climate change."

Despite their skepticism about the constitutionality of the orders, the Journal said Trump had gained crucial leverage over congressional Democrats.