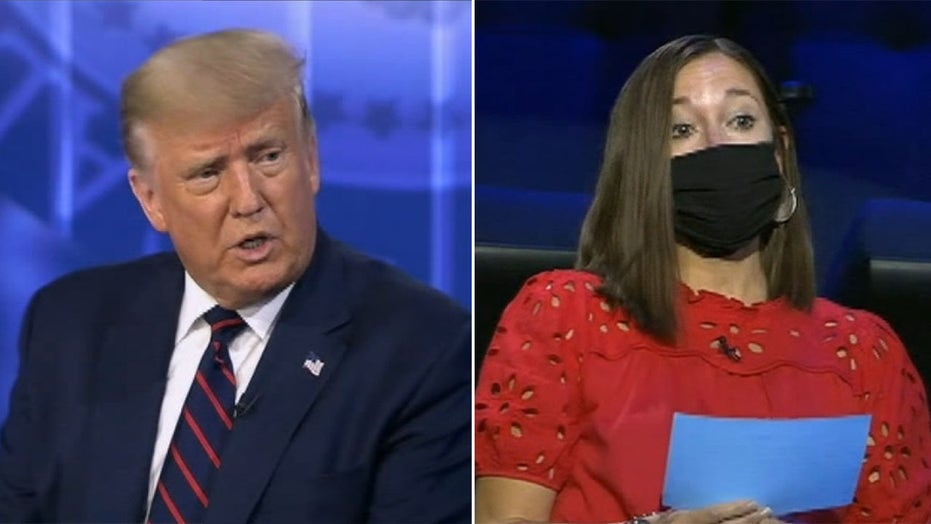 They are distractions, to be sure, but there are a whole lot of them.

President Trump and his campaign are, well, pushing the envelope of acceptability in a general election campaign. And it’s happening at a time when the president is on a media blitz--Axios, Woodward, “Fox & Friends,” ABC--and making his case on substantive issues.

Maybe there’s just more journalistic focus on the Trump campaign, or maybe Joe Biden’s more conventional campaign mainly tends to color between the lines. And it’s entirely possible that most voters don’t care. But Trump keeps setting these mini-fires that are fouling the political atmosphere.

Take, for instance, a recent Trump retweet from the account Conservative Girl (“pro-Trump” and “anti-feminism”) that includes the hashtag #PedoBiden.

So the president of the United States is blasting out to his 86 million followers the absurd and unproven charge that his opponent is a pedophile?

Yes, Biden has acknowledged being too handsy with women in the past, but these are not children.

In fact, the tweet includes a 2015 clip of Biden rubbing the shoulders and whispering in the ear of Ash Carter’s wife, Stephanie, as he was being sworn in as Defense secretary. She has protested, most recently in a Medium piece, that they are old friends and she appreciated his support. In any event, she’s a middle-aged woman.

The retweet produced stories like this one in the Los Angeles Times: “Trump Aims Lower with a Sordid Attack on Biden.”

What actually happened is that Biden, courting Latino voters in Florida, used his phone to play the Fonsi hit song “Despacito.”

But in the edited clip retweeted by Trump, the song was changed to “F-- tha Police,” the 1988 hip-hop rap by N.W.A. The president’s message: “What is this all about?”

Trump has also been saying--he has twice made this claim on Fox--that he believes Biden used drugs during the Democratic debates. He doesn’t have a shred of evidence to support this, but is throwing it out to spread doubts about his rival’s mental acuity.

I don’t see how such tactics help the president’s campaign, given the inevitable media pushback. Maybe they excite or entertain his base supporters. But focusing more on, say, the Middle East peace agreements or the western wildfires would pay higher dividends than jabs that critics can dismiss as untrue or unfair.

A much better use of Trump’s time is the ABC town hall he did on Tuesday night. There he was dogged by his admission to Bob Woodward that he had “downplayed” the coronavirus in its early days, in his telling to avoid panic.

“I didn’t downplay it,” Trump told George Stephanopoulos in Philadelphia, disavowing his own word. “I actually, in many ways, up-played it in action.” He cited travel restrictions on China and Europe, but went on to say “we’re rounding the corner” on Covid-19 and that the virus will eventually fade even without a vaccine.

When an English professor said she would die without the drugs she takes for a serious medical condition and asked about insurance for people with preexisting conditions, Trump said it is the Democrats who “will get rid of preexisting conditions” under Medicare for All. Biden opposes Medicare for All, and it was ObamaCare that barred insurance companies from rejecting people with health problems.

Stephanopoulos jumped in: “You fought to repeal ObamaCare. You’re arguing with the Supreme Court right Now to strike it down. That would do away with preexisting conditions.”

Trump countered that he is working on a new health plan, prompting Stephanopoulos to say he’s been promising that for many weeks.

But it’s good for the president to be mixing it up like that (Biden does a CNN town hall tonight). Even with a skeptical moderator, it’s healthy for Trump to be seen addressing the concerns of average voters.

And it sure beats spreading baseless rumors about pedophilia and obscene rap songs.