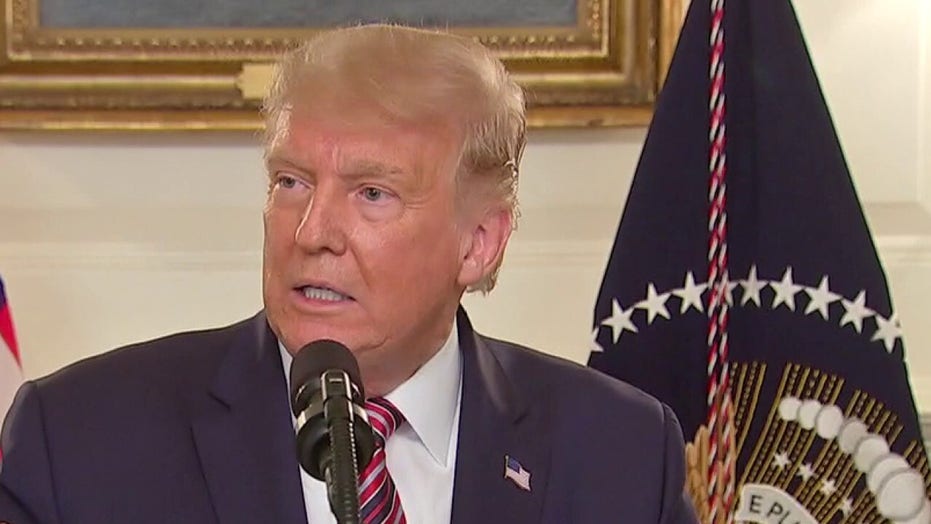 Trump on Woodward revelations: 'I don't want to create panic'

The Bob Woodward book that dropped Wednesday is far harder for President Trump to denounce as fake news, given that he granted the investigative reporter 18 tape-recorded interviews.

The president issued a preemptive denunciation last month: “The Bob Woodward book will be a FAKE, as always, just as many of the others have been. But, believe it or not, lately I’ve been getting lots of GREAT books!”

(That presumably doesn’t include the volumes by Michael Cohen, Peter Strzok, John Bolton and Mary Trump.)

But here’s the thing. While the president is entitled to dump on the rest of “Rage,” which uses Woodward’s classic deep-background method, among the most damaging portions are Trump’s own on-the-record words.

The Washington Post writeup says the president knew from the start that the coronavirus posed a grave danger to America--and he was the source-in-chief.

TRUMP LASHES OUT AT WOODWARD BOOK AS A ‘POLITICAL HIT JOB’

After being warned by national security adviser Robert O’Brien in late January that the virus will be “the biggest national security threat you face in your presidency,” Trump offers Woodward a grim assessment in a Feb. 7 call:

“You just breathe the air and that’s how it’s passed. And so that’s a very tricky one. That’s a very delicate one. It’s also more deadly than even your strenuous flu...This is deadly stuff.”

That sent television producers back to the video of Trump greatly downplaying the danger at the time, saying that Covid-19 was no worse than the flu and would soon disappear.

And on March 19, as the virus was exploding, Trump told Woodward: “To be honest with you...I wanted to always play it down. I still want to play it down, because I don’t want to create a panic.”

On that point, there can be no Atlantic-style controversy over unnamed sources: Woodward, contrary to his usual practice, is releasing the tapes.

At a news conference yesterday, the president called the book “another political hit job” and that his job was to be a “cheerleader.”

“We don’t want to instill panic. We don’t want to jump up and down” and “scare everybody,” he said, adding: “The last thing you want to do is create a panic in the country.” Trump said he was “very open” with Woodward and anybody else.

But more than 190,000 deaths later, much of the media accused Trump of being untruthful. Soon after Kayleigh McEnany said “the president never downplayed the virus,” CNN anchor Brianna Keilar broke away and accused the press secretary of “lying.”

Joe Biden wasted no time in accusing Trump of lying about the virus and accusing him of “a life-and-death betrayal of the American people.”

The back story is that Trump didn’t talk to Woodward, despite numerous requests, for his highly critical first book, “Fear.” The president later told his staff he didn’t want that to happen again.

I’ve worked with Woodward, who is tireless, and am well familiar with his techniques. He gathers information from cooperative sources and then goes to recalcitrant officials and says he wants to include their viewpoint as well. Since he quotes private conversations verbatim, there is always controversy about who leaked what and whether the portrayal favors one faction or another.

Coats, a former senator, is said to have replied: “True. To him, a lie is not a lie. It’s just what he thinks. He doesn’t know the difference between truth and a lie.”

And “Rage” includes the super-secret private letters between Trump and Kim Jong-un.

But the president’s own words have the most resonance. When Woodward says they are of the same generation and have a need to “understand the anger and pain” felt by blacks, Trump disagrees in an incredulous voice:

“You really drank the Kool-Aid, didn’t you? Just listen to you. Wow. No, I don’t feel that at all.”

In another conversation, Trump says: “I’ve done a tremendous amount for the Black community. And, honestly, I’m not feeling any love.”

There are other eye-popping Trump quotes, as noted in a New York Times account. He calls the U.S. military “suckers” for paying substantial sums to protect South Korea: “We’re defending you, we’re allowing you to exist.”

Woodward also quotes Trump as telling trade adviser Peter Navarro in 2017 that “my f--ing generals are a bunch of pussies. They care more about their alliances than they do about trade deals.”

Woodward’s standard technique is to lay out all the facts he can gather, Sgt. Friday-style, and let readers draw their own conclusions. But this book is an exception.

Woodward is already taking heat for not having disclosed the earlier Covid conversations with Trump, on the grounds that he could have saved lives. Having written six books, I can tell you that Trump simply wouldn’t have said these things if he thought it was going in the paper that week. Woodward told the Post that the significance of the earliest virus conversations wasn’t clear before the pandemic, that he wasn’t sure Trump was telling the truth, and the point of the book was to put the presidency in a larger context.

Robert Costa, co-author of the Post piece, told MSNBC that his colleague concludes that Donald Trump is unfit for office.

Woodward writes this on the virus: “Trump never did seem willing to fully mobilize the federal government and continually seemed to push problems off on the states. There was no real management theory of the case or how to organize a massive enterprise to deal with one of the most complex emergencies the United States had ever faced.”

As an author of best-sellers dating back to Watergate, Woodward is entitled to declare his conclusion on Trump’s tenure. But that opens him up to charges that his real motive is to help oust the president in a book published two months before the election. Its real contribution may be what Richard Nixon never provided: all those words by which voters can ultimately judge Donald Trump.