The Washington Post says Trump did not tell a Georgia ballot investigator to 'find the fraud' or that she would be a 'national hero' if she did.

The Washington Post made a massive correction Monday to a January report about a phone call between then-President Donald Trump and a Georgia elections investigator, as the liberal paper admitted multiple quotes attributed to Trump based on an anonymous source were inaccurate.

The corrected story was a hot topic on cable news and talk shows that helped spread the Post’s flawed report and media watchdogs feel it points to larger problems with agenda-driven anonymous sources and liberal outlets that rush to "confirm" them.

"This 'correction' is more than a correction, it calls into question the pervasive reliance of the liberal media on anonymous sources in order to attack and undermine Republicans," Cornell Law School professor and media critic William A. Jacobson told Fox News.

WASHINGTON POST PANNED FOR MASSIVE CORRECTION TO TRUMP-GEORGIA ELECTION STORY: 'SO, THEY MADE UP QUOTES'

"Almost the entirety of the Russia collusion media effort was based on anonymous sources which turned out to be overblown at best, false at worst, after the Mueller Report was released," Jacobson continued. "This raises the question of whether these sources exist at all, or are fed the answers the liberal media wants to create the appearance of reporting for what in reality is a regurgitation of media talking points."

The Hill media columnist and Fox News contributor Joe Concha feels anonymous sources do exist but are often simply political operatives looking to push their preferred narrative regardless of facts.

"They’re given these conjured-up quotes, and it comes from a nefarious source. Does this all sound familiar? And it’s not Deep Throat we’re talking about here, it’s a political operative that had an agenda," Concha said Tuesday on "Fox & Friends." 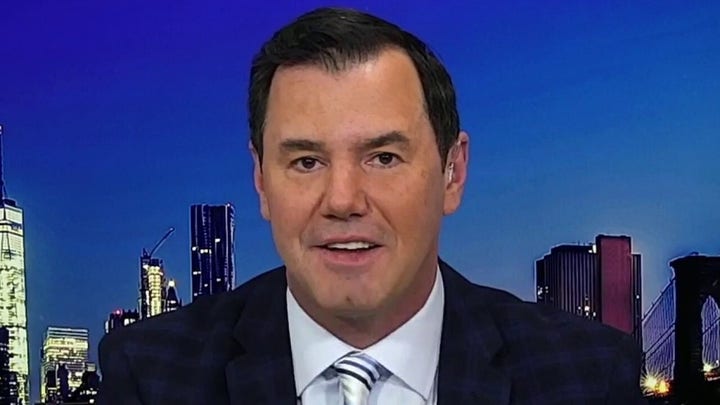 "It’s kind of like, you go to the beach and you throw up food to seagulls and the seagull doesn’t really check what the food is exactly, they just eat it up. They gobble it up and that’s what happens with the media so often," Concha said. "During the Trump era we had all these unnamed source stories that only seem to go in one direction, negative toward the 45th president."

The Post initially reported Trump had told an official working in Georgia Secretary of State Brad Raffensperger's office to "find the fraud" in the state, which he lost narrowly to Joe Biden, and that she would be a "national hero" if she did.

However, a newly emerged recording of the Dec. 23 call found he didn't use those words. Instead, Trump said she would be "praised" when the "right answer comes out" and encouraged her to closely examine mail-in ballots in heavily blue Fulton County.

CNN even boasted on air that its own reporter "confirmed" the bogus details of the call.

"Will any of these ‘reporters’ offer corrections? If not, are they ‘reporters,’ or activists? Yes, these questions are rhetorical," Elliott wrote.

Washington Examiner columnist Becket Adams wrote the "real scandal" is so many news organizations claimed to confirm the phony story with their own anonymous sources. CNN wasn’t alone in confirming the Post’s since-corrected bombshell, as Vox, NBC News, ABC News and USA Today were among the other mainstream outlets to do so.

"It's unrealistic so many sources would be wrong about the same thing. It's more likely competing news outlets spoke with the same anonymous individual or individuals, which leads to uncomfortable questions about whether the media were merely fed bad information or were intentionally manipulated," Adams wrote. "How does one ‘confirm' something that is not true?"

"For the sake of transparency and credibility, it would behoove them to acknowledge their error, issue a correction and revisit their procedures to verify information. Although it’s one of several statements attributed to Mr. Trump, misquoting or misinterpreting one statement can affect the believability of other attributions," Boynton told Fox News. "This kind of issue has a ripple effect on the reputation of all media outlets. Trust is hard to come by these days."

DePauw University professor and media critic Jeffrey McCall feels the Post’s correction "is the kind of media malpractice that causes so much of the citizenry to distrust the media" at large.

"The story should have never run in its original form because it was apparently based solely on ‘a source.’ Anonymous sources do have a place in journalism, but the reporting organization had darn well make sure such ‘a source’ is really credible. The Post was too eager to detonate this bombshell because it fit an overall narrative it wanted to push regarding Trump and election fallout," McCall told Fox News.

McCall feels the Post should consider revealing the identity of the source who provided inaccurate information.

"This fraudulent story exposes what's wrong with anonymous sources. They can claim the most hyperbolic things about what a president said, and when an audio recording exposes the fraud, no one knows the identity of who faked the news. At the very least, we should know who this is, so other reporters can know not to use them again," Graham told Fox News.

"This shows you how desperate the Post and other Trump-hating media outlets were, that they were so gullible to misinformation, even as they claimed they were the antidote to misinformation," Graham added. "If these outlets care about facts and truth at all, they will be investigating how this happened and reporting to us how they got this wrong. Let's not hold our breath."