CNN admitted to the Washington Post Tuesday that it made an "exception" to its rule against primetime host Chris Cuomo interviewing his older brother Andrew, the governor of New York, due to the "extraordinary" early months of the coronavirus pandemic.

"The early months of the pandemic crisis were an extraordinary time," a network spokesperson told media columnnist Erik Wemple. "We felt that Chris speaking with his brother about the challenges of what millions of American families were struggling with was of significant human interest. As a result, we made an exception to a rule that we have had in place since 2013 which prevents Chris from interviewing and covering his brother, and that rule remains in place today. CNN has covered the news surrounding Governor Cuomo extensively."

Wemple, who focuses on cable news, criticized the statement as an "expression of the problem itself."

"You can’t nullify a rule when your star anchor’s brother is flying high, only to invoke it during times of scandal. You just can’t," Wemple wrote.

"Now the rule is back, conveniently at a time when the governor is getting a battered for his mishandling of this tragedy," Fox News "MediaBuzz" host Howard Kurtz told "America's Newsroom" on Wednesday.

As the elder Cuomo is engulfed by accusations that he covered up New York state nursing home coronavirus deaths from federal authorities, some media critics are re-examining the ethics of Chris Cuomo's admittedly unobjective "interviews" of his brother last year.

Among them is Wemple, who noted the younger Cuomo skipped his brother's news conference on Monday about the growing scandal.

"Perhaps that shouldn’t be a surprise: Chris Cuomo and Andrew Cuomo are brothers, and journalists can’t reliably cover their brothers," Wemple wrote.

Fox News reached out to CNN multiple times for an explanation over the past year, including last week. Asked again for comment about its admission to Wemple about its "rule" on Cuomo interviewing his brother, CNN spokespeople did not respond.

The Cuomos joked about their mother, teased each other, and even engaged in prop comedy during the governor's 10 appearances on his brother's show last year. While they also discussed emergency equipment and serious measures to combat the virus, which the younger Cuomo got and recovered from last year, there was no mistaking it for serious journalism.

"I’m wowed by what you did. And, more importantly, I’m wowed by how you did it," Chris Cuomo told his brother of his work on the pandemic. 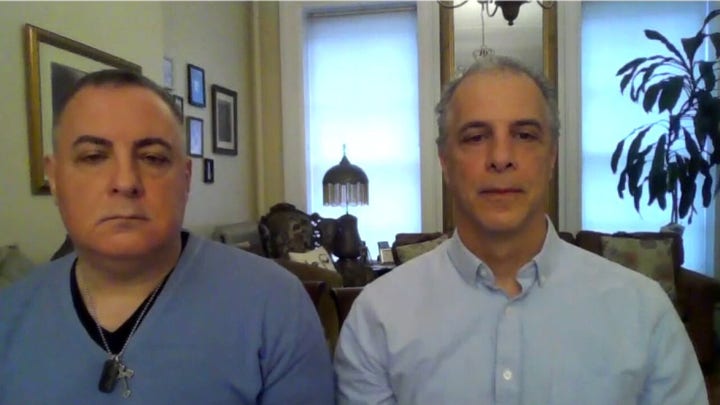 Some outlets have long criticized the news network for allowing the family members to light-heartedly banter on air, but their exchanges didn't always receive criticism. In fact, entertainment outlets delighted in their interplay; NBC's TODAY gushed over them providing "comic relief during a difficult time."

The praise wasn't just from entertainment media. The Washington Post's liberal media columnist Margaret Sullivan called the Cuomos "surprisingly addictive viewing" last April, saying one of her "millennial children" would text her when their friendly interviews took place. While Sullivan quoted people who noted the clear conflict of interest, she concluded it was "pretty harmless stuff."

"I could watch the brotherly banter between the Cuomo's [sic], all day," liberal Republican pro-Biden commentator Ana Navarro tweeted in April.

Other network personalities also gushed over Andrew Cuomo's work. CNN media correspondent Brian Stelter thanked him for giving people "hope, but not false hope," and even said he would pass along one of Cuomo's bromides about enduring hardship to his own children. MSNBC's Nicolle Wallace, a reliable Democratic sycophant, said Cuomo was "honest, direct, brave," and "one of the heroes" fighting the virus.