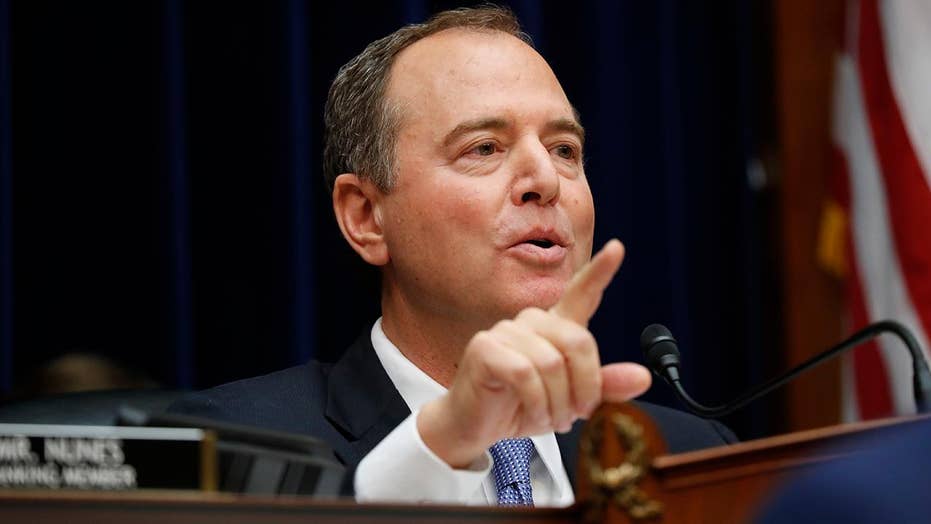 In the hearing's aftermath, Schiff faced a wave of backlash for parodying the transcript of the intensely scrutinized conversation between President Trump and Ukrainian President Volodymyr Zelensky in July.

“I have a favor I want from you,” Schiff said while appearing to read from a piece of paper during the hearing. “And I’m going to say this only seven times, so you better listen good. I want you to make up dirt on my political opponent, understand? Lots of it, on this and on that.”

Schiff later said his comments were a parody and suggested that it wasn't his fault that critics failed to recognize that.

TRUMP DEMANDS SCHIFF RESIGN OVER 'PARODY' READING OF UKRAINE CALL: 'HE GOT CAUGHT'

Co-host Sunny Hostin came to Schiff's defense on Friday, saying it was "one small parody" and suggesting it was an appropriate way of portraying Trump as a mafia don.

"I didn't read it as a joke at all, actually, because when I read the transcript, it sounded a lot like some of the wiretaps that I listened to when I was a federal prosecutor. And remember that Adam Schiff was a federal prosecutor -- and I think what he was likening it to was when a mafia don says, 'I'm asking you for a favor, I'm going to give you an offer you can't refuse,'" she said.

She also praised Schiff as "cogent," "concise," and "fantastic." "Adam Schiff is the man!" she exclaimed. "View" co-host Meghan McCain had a radically different take and described Schiff's comments as incredibly inappropriate given the situation.

"I think if you have to clarify it's a parody, you've done it wrong," she said. "I also think, tonally, when you're opening up the investigation into impeaching our president about possible trades for information for money, this is not a time for parody at all."

McCain went on to say she couldn't "stand" Schiff and thought someone else should be spearheading the House's investigation into Trump.

"I think he's the worst kind of partisan in Washington," she said.