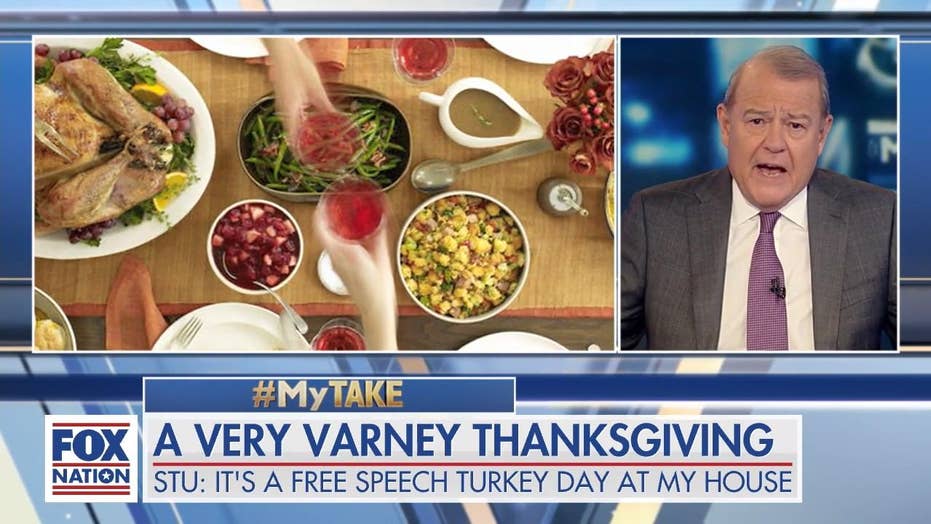 Varney says Thanksgiving dinner will be 'field day' for Trump supporters: 'A tide has turned'

"Every year during the Trump presidency, the same old Thanksgiving question rolls around, 'Will you talk politics around the dinner table?'" Fox Business host Stuart Varney asked in a new episode of Fox Nation's "My Take."

"Instead of playing defense at the Thanksgiving table this year, Trump supporters can be quietly smug. The tide has turned."

"My answer is the same as it's always been, 'Of course, politics will be discussed.' It's a free speech Turkey Day at my house and so far, we have not had a temper tantrum, no tears, no storming out of the room," said Varney.

"Instead of playing defense at the Thanksgiving table, this year Trump supporters can be quietly smug. The tide has turned. Trump haters are fading. They're tired. They are fatigued. Let them be horrified -- quietly."

As the country gears up for Thanksgiving this week amid an impeachment investigation into the president, many homes are banning political conversations at dinner -- but Varney discourages Americans from shying away from the controversial topic.

"Of course, it does help that there's broad agreement around our table that we're thankful to be celebrating a prosperous constitutional republic. We're pretty happy with the way our country is going right now," Varney said.

On the other hand, Varney suggested that the "Trump haters" were "getting fatigued."

"They've been stamping their little feet all the way through Russia, Russia, Russia, then obstruction of justice and now impeachment for a Ukrainian quid pro quo. Surely they're getting tired and maybe they are beginning to realize that hatred brings a backlash," he said.

"The Trump haters are not gaining ground. All those hours of turgid impeachment hearings have actually produced some sympathy for the president," Varney added.

The recent impeachment proceedings may have done Trump more good than harm, Varney explained, saying that he "sensed a shift in public opinion."

"All that noise in Washington is being drowned out by prosperity. We'll be sitting around the dinner table in a full-employment economy, driving with very cheap gas and spending our rising incomes -- doesn't that make for a little more civility?"

"And besides," he continued, taking aim at newly declared 2020 candidate Mike Bloomberg. "The Democrats now have to defend a party that hates billionaires, but which may also be led by a multibillionaire. And if that's not Mike Bloomberg, it would be a socialist spouting economic nonsense."

"Have fun defending that. Trump supporters will have a field day."