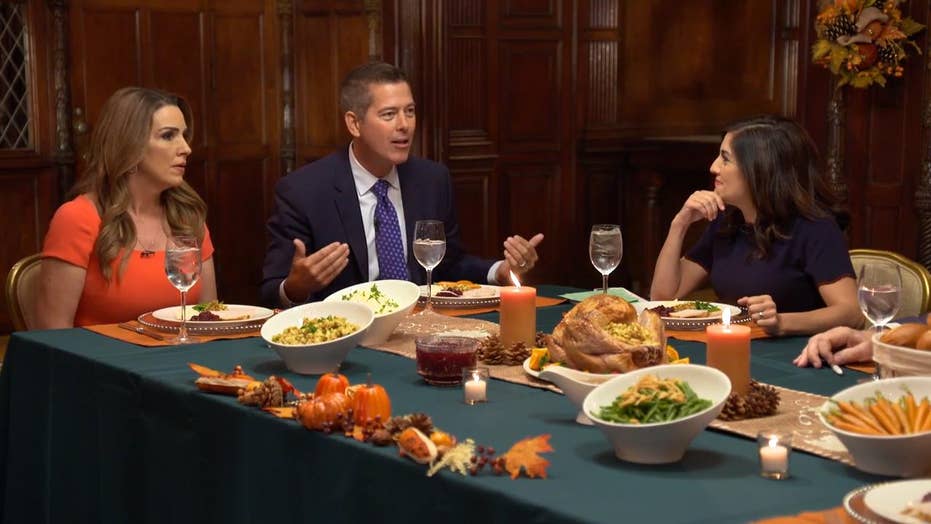 As the country gears up for Thanksgiving this week, many homes are banning political conversations at dinner -- but former congressman Sean Duffy advises against it.

"This is everything that's wrong with America," Duffy said, "if we can't sit and talk about politics with our family, and disagree on politics and Donald Trump versus MSNBC news and do it respectfully and lovingly."

In a new Fox Nation Thanksgiving special, the casts of "Moms" and "Wise Guys" teamed up to discuss personal Turkey Day traditions, the history of the day, and the anticipated political tension that often comes with bringing the family together.

"One of my brothers is a big, big liberal, the other is a real good conservative ... but we just don't talk politics because we don't want to," Fleischer said.

"There are so many other good things to talk about and that's where we go naturally. ... It just doesn't come up."

Frequent Fox News guest Erin Elmore said she does her best to avoid political discussions during dinner, but it remains "an elephant in the room."

"The Duffys have it a little bit different," responded Fox Nation host Rachel Campos-Duffy, reiterating her husband's acceptance of political debate at the table.

"We break all the rules when it comes to what we can talk about because we very much feel like kids need to learn to talk about these issues. ... If we don't teach them how to discuss things civilly at home, when are they going to learn to do that?"

When Elmore highlighted Campos-Duffy's call for "civil" debate, the Fox Nation host and mom of seven had a surprising response.

"Sometimes it has to be uncivil so they learn what uncivil looks like and then you can reign it back," she said.

"Why can't we disagree on politics but ... still love?" Sean Duffy asked.

"This is happening in Congress as well," he continued. "If you can't actually sit down and go: 'We're gonna fiercely debate the policy but we can go have a beer later. ... We can still have a twinkle in our eye and still like each other.' And if you can't do that at home, how does it happen in the broader population?" he said.

"If we don't teach them how to discuss things civilly at home, when are they going to learn to do that?"

Fleischer agreed on the importance of civil debate at home but discouraged political conversations at a "table of 20" where "somebody may say something so inflammatory it ruins the conversation."

"But," Duffy responded, " I think you can teach in that moment, too -- to go ... You can tell me why you hate Donald Trump, I'll tell you why I love him, but let's not attack each other,'" he said.

"Have you met my brother?" Fleischer joked in response.

A LOOK AT THE WHITE HOUSE'S THANKSGIVING TRADITION OF PARDONING

At the end of the day, all of the guests on the Fox Nation episode agreed: whether you share similar political viewpoints or not, family comes first.

"I think for so many people, because the news cycle is so fast, because it's so intense, maybe politics is starting to take over too much," Campos-Duffy said. "And while it's important, family and love and children are so much more."

To hear more from the guests covering a broad range of topics including the importance of educating children on the history of Thanksgiving, their personal family traditions, and more, join Fox Nation and watch the Thanksgiving special today.